Posted on November 11, 2014 by MrHappyCyclist

There will be a meeting of the Bolton Cycle Forum on Wednesday, so I have been having a look at the most recent documentation I can find on the cycling strategy of Bolton Council. This is the “Bolton Cycling Strategy and Action Plan 2006/07 – 2011/12” (PDF), published in February 2006. I had thought there might be a later one, but this is all I can see on the web site.

The document is predictably very disappointing and shows no real ambition whatsoever –  an observation that is reflected in the census result for people cycling to work:

The Cycling Strategy sets a targets of increasing cycling compared to a 2003 baseline by 10% up to 1009, and by 30% up to 2012. It then projects this further with a target of 50% increase by 2015 (pp. 19-20). Of course, this is a rather pathetic goal given that, as stated in the report, 50% increase “would mean on average 29 more cyclists on A and B roads”. But how come we see almost a 20% decrease in the numbers cycling to work? Surely, it should be possible to meet the rather weak targets set out in the Strategic Plan? Let’s have a think about why we haven’t.

I won’t go into the whole 38 pages of the report here but, in preparation for a discussion I hope we will have at the Cycle Forum, I took the map of the Proposed Strategic Cycle Network from page 37 and had a look at just what this cycling nirvana looks like 2 years after the end of the plan. It just happens that my journey to work takes in most of one of the major cycle routes in the Strategic Cycle Network; a route that follows the A666 apart from one section that is forbidden to cyclists due to its being on a 4 lane, 50mph bypass. Of course, if there’s a big bypass, then the opportunities for high quality cycling provision on the remaining roads must be huge! Even more exciting is the fact that this route is billed as one of the Strategic Cycle Routes that already existed in 2006, so 2 years after the end of this strategic plan, it must be absolutely bloody marvellous!  So, I took some typical pictures from my commute along this strategic cycle route and arranged them around the map to show what a Strategic Cycle Route looks like in Bolton. Here it is: 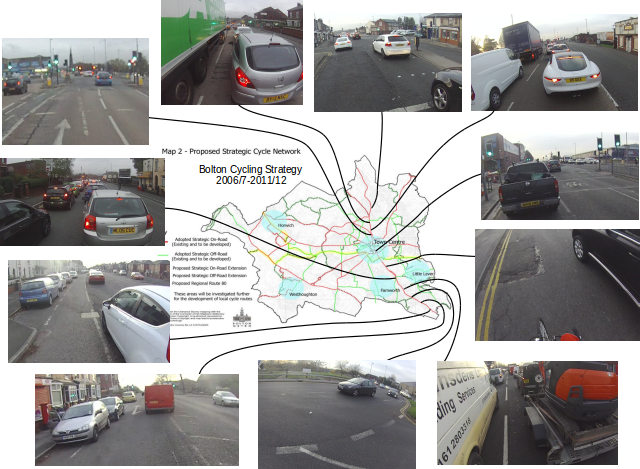 What could possibly be the reason for the the failure to meet the targets when we have such fantastic cycle provision as this in our town? There’s just no accounting for it!