Posted on November 18, 2014 by MrHappyCyclist

I had occasion to report another incident to the Police last Friday. I may blog about that in due course, but this post is just about the conversation I had with the police officer who dealt with the case when I went to make a statement. It serves to illustrate further what seems to me to be a weird world view amongst most police officers when it comes to incidents involving bicycle riders and motor vehicle drivers.

Before I go further, I should mention that the officer concerned was a nice guy, was extremely helpful, and did eventually take a detailed statement with a view to pursuing a prosecution if it got that far. However, the discussion described here illustrates the gap between the perceptions that the police as a whole seem to have, and those of a vulnerable road user such as a cyclist.

The incident involved a driver who took exception to the fact that signalled for him to stop trying to overtake me into a narrow pinch point between the kerb and a pedestrian refuge island, and behaved in an angry, aggressive manner. These are some of the argument that the officer used to try to persuade me to drop the matter.

“There’s a cycle lane to the left of the road there, which you weren’t using.”
In fact, he is referring to the shared footway that I wrote about in this article and discussed in this video. To be fair to the officer, he did acknowledge that I was right when I pointed out that riding on the shared footway at 20mph would be irresponsible and contrary to Government recommendations, and that it is more appropriate to ride on the road at that speed.
“Whilst the driver should not have reacted in the way he did, you are partly to blame for putting your arm out.”
Well, despite what the driver screams and shouts about, I did not “put [my] arm out”, I put it backwards with the palm facing back to ask the driver not to overtake at that point. The following picture is taken from the video of the incident: 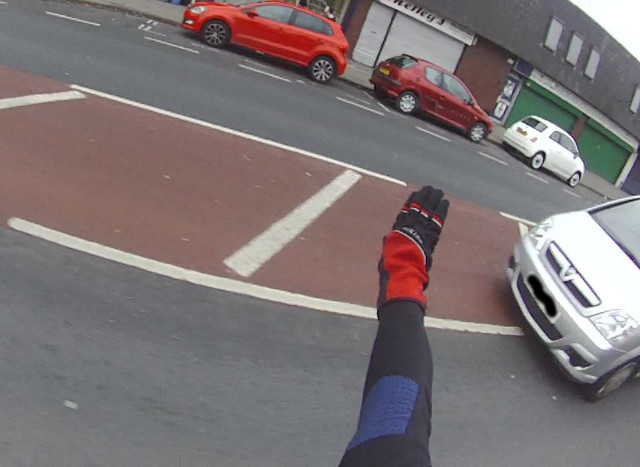 and here is a picture I made to show the difference between an arm out to the side and the signal that I made: 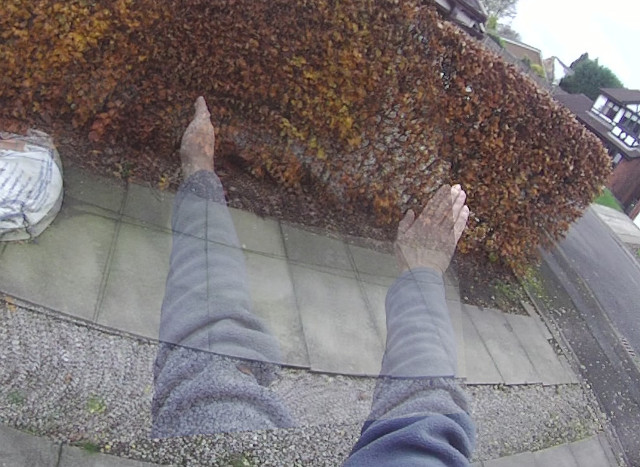 It is perfectly reasonable for a cyclist who thinks a following driver is about to cut him up into a pinch point to use a hand signal to attempt to prevent such a dangerous manoeuvre by the driver.
“The driver was angry because you put your arm out so that there was no longer enough space to get past.”
This is just a ridiculous argument. If a car is being driven so close to a cyclist that it would hit an outstretched arm, then that car is being driven far too close to the cyclist. Highway Code rule 163 shows how much space a motorist should give a cyclist when overtaking:

“I’ve been there and had a look, and if you hadn’t put your arm out there would be enough room for the car to overtake through the gap.”
I suspect the officer has not, in fact, been to look at the location. However, even if he has, then he is grossly mistaken. Here is a picture that I took yesterday on the approach to this same pedestrian refuge island when a car was passing through:

and here is what it looks like if we put a cyclist into the picture, riding in (a rather weak) secondary position: 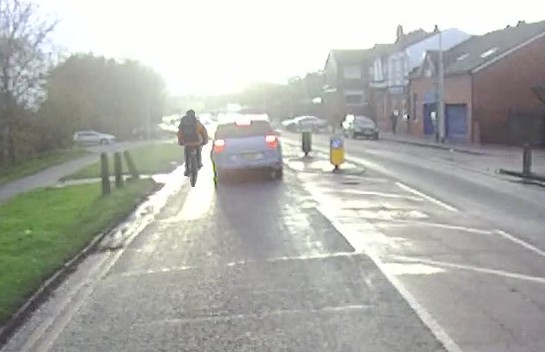 To say that this would constitute a safe overtake is ridiculous. Compare that with the picture above from Highway Code rule 163.

In the discussion, it also became clear that the officer’s opinion on what constitutes sub-standard driving in these circumstances revolves wholly around whether or not they actually hit the cyclist with their motor vehicle.

In my view, the discussion I had with this police officer just provides further evidence that the police need to be educated regarding what is and is not acceptable on our roads.