Posted on February 12, 2016 by MrHappyCyclist

(Caveat: I Am Not A Lawyer)

We see time after time failures of justice at all levels when it comes to dealing with incidents that happen on our roads. We have a poisonous road culture and a uncaring society when it comes to road violence. A recent article in the Daily Telegraph highlights this, though there have been many other articles in the past saying much the same things.

Experience from the study of health and safety practice teaches us that, if you really want to eliminate the tragedy of serious incidents, you need to address and respond to the minor incidents and near misses. You report and record all of those and use a combination of re-engineering, education and enforcement to bring about improvements in the culture and practices. Re-engineering is the most effective action as it can remove the danger at source, and that is what ultimately needs to happen through the re-allocation of road space to cycles, but it is the education and enforcement that provide a benchmark for people to set their expectations by, and the same should apply to the setting of the social norms that make up much of the culture on our roads. I was particularly taken recently by this blog article from Cherokee Schill in the USA, which very succinctly sums up the failure by the authorities – particularly the police – to apply this principle to education and particularly enforcement in relation to road safety, and I think it applies equally in the United Kingdom. See, for example, these articles, as well as this article and this recent newspaper article, both of which involve actual collisions in which the driver was at the very least careless and could have resulted in deaths or serious injuries, but the police declined to take any action; one can only hope these drivers won’t go on to kill someone.

We seem to have a culture on our roads in which people’s desire not to be delayed in any way often takes precedence over the safety of other road users, including pedestrians and cyclists, as well as very low expectations for the care that drivers are expected to bring to the task of driving –  a very unhealthy culture indeed; but why is this the case?

On the roads,  we rely almost wholly on the police to provide the enforcement element of this formation of cultural norms (as well as much of the education and recording elements), but anyone who has has cause to turn to the police in relation to road incidents is likely to have found it very frustrating. Of course there is a problem of resources, but it goes beyond that, with the police displaying an attitude that seems to belittle the concerns of the most vulnerable road users. But the police are generally not bad people, so where could this attitude come from? Where do they get their values?

Well, when making a decision on whether to proceed with a particular case,  the police need to consider whether the probable benefit is worth the cost of investigating and building a case. This is largely determined by the likelihood of getting agreement from the Crown Prosecution Service (or, I think, the Procurator Fiscal in Scotland) to prosecute the case. Unfortunately, the CPS frequently declines to prosecute cases that, on the face of it, seem to the plaintive to be blindingly obvious, or often pursue a charge of a less serious level than the one that seems to be appropriate. It is likely to be the experiences that the police have with the CPS that have a major impact on the norms that have evolved in the police regarding what is or isn’t acceptable on the roads. So why could it be that the CPS reject so many cases that involve often quite dangerous behaviour?

The main considerations for the CPS in deciding whether to pursue a prosecution again revolve around comparing the costs against the likely benefits. This involves primarily two factors: whether the case is “in the public interest”, and how likely it would be for the prosecution to be successful. Let’s focus on the latter of these two factors. The CPS will assess the likelihood of a successful prosecution on the basis of their experience in previous cases. They will almost certainly have a feel for, and even policies regarding, whether a case is strong enough to convince a jury, or magistrates, to return a guilty verdict, so next I will look at that.

In criminal cases (as opposed to civil cases), the decision has to made about whether society, represented by “The Crown”, should punish a person (or persons) for breaking one or more laws. Quite rightly, that decision is not to be taken lightly, and the burden rests with the prosecution to prove their case to the extent that the members of the jury, or the magistrates, can be sure that the defendant is guilty of the crime. The term “beyond reasonable doubt” is sometimes used in relation to this. The principle behind setting the bar so high for prosecutions derives from the statement: “It is better that ten guilty persons escape than that one innocent suffer“, made by Sir William Blackstone as far back as the 1760s. What this means in practice is that the defendant and his/her counsel in a case have merely to present sufficient evidence to cast some doubt in the minds of jurors or magistrates regarding the prosecution’s case – just enough for them to think “I am not absolutely sure that the defendant is guilty” –  in order to secure an acquittal (i.e. a “not guilty” verdict).

Further than this, a juror (and I presume a magistrate) will be told by a judge in no uncertain terms that they must reach a verdict only on the basis the evidence that is presented to them in court. It is actually a criminal offence for a juror to carry out their own research, for example on the Internet, into any aspect of the case. I mention this because one method of introducing doubt into the juror’s mind is to produce some excuse as to why, even though the defendant did actually carry out the act of which they are accused, they are still not guilty of an offence. An example of that from a completely different area might be that someone was acting in self-defence in an assault case. Another example, from a case much closer to the subject of this blog, is raised in this recent post and subsequent discussion on Twitter:

Of course, this specific case hasn’t been tested in court, but the reasoning the CPS have applied is almost certainly that the “failure” of the aggrieved party to wear a high visibility jacket or vest would be sufficient to put reasonable doubt in the minds of magistrates or jurors; sufficient for them to think it is possible that even someone who was driving to the standard expected of a careful and competent driver might still have hit the cyclist. The worrying thing is that the CPS may well be right in that. Jurors do not have expert knowledge of the effectiveness or otherwise of high visibility clothing in preventing collisions with cyclists. Even if the prosecution counsel were to bring expert witnesses to testify in relation to that, the jurors (or magistrates), many of whom might be drivers themselves, might think: “yes, I also might have failed to see a cyclist who hasn’t taken the precaution of making themselves highly visible”.

The problem here is that jurors, and to some extent magistrates, not being experts in the subjects they have been asked to consider, will base their judgements on their own experiences of what is or isn’t expected of drivers; experience that just comes from living in society themselves. They will have absorbed information about everything they have observed in living in that society and established norms and expectations that accord with that experience. In relation to driving, that will often include observations, albeit unconscious ones, that lead them to think, for example, that it is acceptable to drive slightly over the speed limit. Those expectations will include a feeling for things like what level of concentration should be applied when driving a motor vehicle, and those expectations are what they will apply when make a decision as a juror.

So here is where the crunch comes, because a very significant factor – probably in fact the most significant factor – in forming those norms and expectations is probably what they see the police do; how they see the police react (or not) to various situations; how seriously the police take complaints about various levels of undesirable behaviour on the roads or various grievances that members of the public may bring to them.

Now we have closed the circle. It is a vicious circle; a circle of influence that is self-reinforcing, and it can be seen in this graphic: 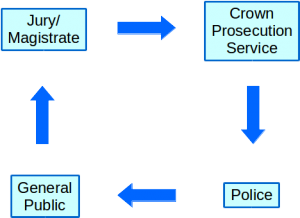 Until this circle is broken, we will not see appropriate action taken against drivers who risk doing harm to other people, nor even to people who actually do harm.

This entry was posted in Article, Police, Road Justice. Bookmark the permalink.

4 Responses to The vicious circle