Posted on December 19, 2014 by MrHappyCyclist

This is a major edit of an article I posted last week,  which prompted some very useful feedback, especially from a couple of people involved in the Warrington cycle campaign, who pointed me towards some useful references. You can read their feedback in the comments at the bottom. The original post is here below;  I will add my revised thoughts below that:

Yesterday, I posted a video on YouTube about an awful cycle “facility” that I came across in Blackburn. I put the word “facility” in quotes because it implies something that makes things easier, which this certainly does not. One of the reasons it is awful is because of the way in which the problem of getting cyclists across roundabout is treated. There are six roundabouts on the short stretch that I showed, the last two of which I moved onto the road for. The following video shows me crossing just one of these on the cycle track:

The cycle track, which is on a shared footway, goes around the shoulder of the exit, then turns sharply across the exit/entry road of the roundabout. This results in a cyclist having to turn around to look backwards at traffic on the roundabout and attempt to guess whether each vehicle is going to go around the roundabout or exit down the road that they are trying to cross. Due to the flare on the entrances and exits of the roundabout, motor vehicle do not have to slow down much to pass through it, and the majority of drivers fail to indicate their intentions, making it difficult to anticipate when it will be safe to cross. (This applies to pedestrians as well.) In the video, I was starting to cross when a car driver, who looked for all the world as though he was going to go straight on, turned out onto the exit I was crossing, without indicating. Fortunately, I was being very cautious there.

By contrast, I found crossing the last two roundabouts on the road instead of using the cycle track felt far safer (or at least less dangerous):

The difference here is just that I have priority over the vehicles behind me. The arrangement with the cycle track introduces too many unknowns; not only do I have to worry about the vehicles coming round the roundabout, but also about the vehicles coming behind me up the same road that I came up. If the priority I had on the road were maintained when on the cycle track, I would feel far more comfortable using that track. (Though there are many other problems with the shared footway itself.)

That is the end of my original post, and my feelings about it personally remain much the same, given the current geometry. However,  reading the comments and references made me step back a bit and consider wider aspects of the design of these roundabouts, the reasons why using the cycle track feels less safe than using the road, and the things that could have been made better. Note that I am here addressing a very specific point about the cycle track crossing the entrances and exits to the roundabout. There are many other aspects of this cycle track that are poor, which I am ignoring here, and I am not touching upon the issue of convenience,  which is also relevant in relation to getting more people to use bicycles instead of cars for transport.

As I said,  the fundamental reason for my nervousness in crossing the entrance and exit roads using the cycle track is the uncertainty about whether or not vehicles on the roundabout are going to exit the roundabout along the road that I’m trying to cross. I suggested that changing the priority could help with that,  but didn’t address the aspect of the geometry that contributes to that uncertainty. The problem is that the distance between the point at which the intention of the driver becomes apparent and the point of conflict is too short, so that I have to wait even for vehicles that are not taking the exit just in case. The picture below shows the geometry of the roundabout: 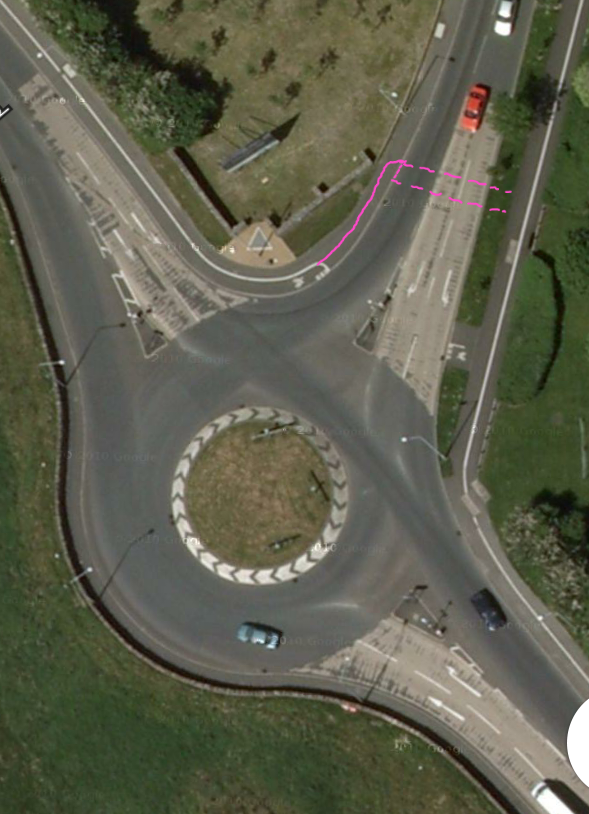 Here, it can be clearly seen that there would be plenty of space to set the crossing point further away from the exit, as shown by the markings I have added in magenta. This would give plenty of time for a cyclist to determine when it is safe to cross,  making it less relevant whether the cyclist does or doesn’t have priority. It could also improve safety by allowing drivers to finish negotiating the roundabout before having to consider crossing cyclists (or pedestrians for that matter).

This is just one aspect of the physical design that affects the subjective feeling of safety (and possibly the actual safety) of the cycle track. Other aspects include measures that serve to slow down the traffic on the roundabout,  such as applying an adverse camber and tightening the road geometry, as well as, in my view, non infrastructure related aspects such as better awareness and attitudes among drivers, and changes to the law to place the burden of proof on the motorist whenever a collision with a cyclist or pedestrian does occur (i.e. presumed liability).

Much of the thought here on roundabout geometry derives from the documents referenced in the comments regarding Dutch design principles, so I thank those people for pointing me towards those documents.