Posted on February 8, 2015 by MrHappyCyclist

The picture below shows the approach to some road works that are currently in progress on Moss Bank Way in Bolton:

“Cyclists Dismount” signs are often used by ignorant local authorities who claim that they are there for safety reasons, ignoring the fact that cyclists have every right to make use of the main carriageway, and are encouraged to take a road position in the centre of the lane where the road narrows as much as this one does up ahead, which the Council acknowledged in this tweet:

On Thursday I challenged the council via their twitter account with a post containing the picture above and the words: “Typical: screw both cyclists and pedestrians. How about “Motorists do not overtake cyclists.” instead? #space4cycling”, followed by a direct question to the Council asking “@BoltonCouncil Was this your idea?”  This caused something of a discussion, which I will discuss later, but which ended with the following tweet from the council:

“But why is this a problem?”, you might ask; after all, the sign is only advisory and there is nothing to stop cyclists using the carriageway as I did on this occasion: 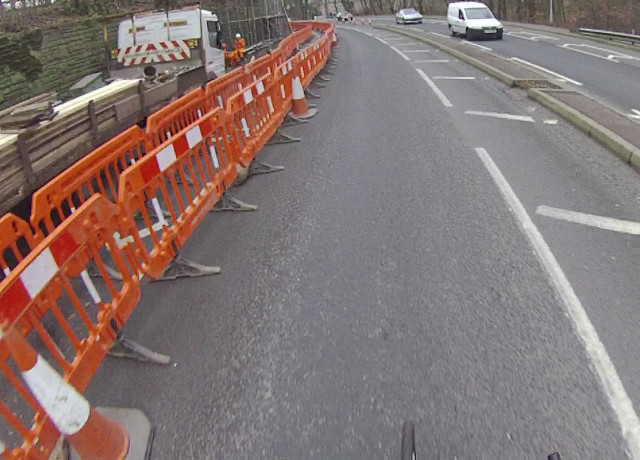 Well, the first issue with this concerns the nature of the “advice” that the council believes it is providing by putting this sign in place. They are actually advising people on bicycles, including those carrying children, or pulling trailers, or riding cargo bikes, or riding tricycles, either through preference or disability, to get of their cycle and attempt to push it along between the two fences shown on the left of the picture above, noting, of course, the positions of the feet of those fences. They are also advising the said cyclist to push their bike along there whilst sharing it with pedestrians who may travelling in the same direction as they are and with pedestrians who are travelling in the opposite direction. This point was the reason for the wording of my initial tweet to the council on the subject.

The second issue, as anyone with significant experience of riding a bicycle on the roads will know, is that the sign panders to the misplaced sense of entitlement of a significant minority of motor vehicle drivers. It leads them to believe that the cyclist is doing something wrong by riding on the road, and in some cases causes that driver to act in an aggressive manner, using their motor vehicle to threaten and often endanger the cyclist. This is not just a theoretical issue, it happens all the time, and it is unfortunately the same attitude that leads a local authority to put up a sign like this in the first place.

This attitude on the part of the Council is not only annoying, but shows a complete disregard for recommended practices and guidance set down my the Government through the Department for Transport. The particular sign that has been used here is covered by Schedule 12 of the Traffic Signs Regulations and General Directions and designated as 7018.1; it may be found here. The TSRGD seems to contain scant guidance on where and when this sign should be used, but there is another document, issued by the Department for Transport, called Safety at Street Works and Road Works- A Code of Practice, which does contain such guidance. (Thanks to The Ranty Highwayman for this reference.) The particular guidance for the use of this sign says, on page 35:

“Where the carriageway is closed but the footway remains open, a ‘Cyclists dismount and use footway’ white-on-red temporary sign can be used.”
[My boldface]

However, in this case, the carriageway is not closed, making the use of this sign here contrary to the DfT code of practice.  Indeed, the same page also contains the following text:

“You must ensure suitable provisions are made for the safety of cyclists passing or crossing the works. Particular care is needed where cycle lanes or cycle tracks are affected by street works or road works because these routes may be especially popular with cyclists.
Cyclists might have to use other parts of the carriageway, a temporary cycle track, or an alternative route.“

Clearly the Bolton Council is failing seriously in its attention to the practices that it supposed to meet according to the Government’s Code of Practice.

Of course, it could be argued that, whist the Code of Practice does not specifically indicate that the sign should be used in this situation, it does not specifically exclude its use there either. However, there is another document issued by the Department for Transport, known as Traffic Advisory Leaflet 15/99 – Cyclists at Road Works. (Thanks to Greater Manchester Cycle Campaign for this reference.) This document is based on research carried out by the Transport ResearchLaboratory (TRL) on behalf of the Department of the Environment, Transport and the Regions (DETR), and contains the following specific advice:

“Where access is permitted for motor vehicles, “Cyclist Dismount” signs should not be used. The hazards to cyclists at roadworks are rarely great enough to justify this measure. In any case, cyclists are likely to ignore such instructions. The only situation where cyclists should be advised to dismount is where the carriageway is closed off but the footway remains open. In such cases a white-on-red temporary sign “CYCLISTS DISMOUNT AND USE FOOTWAY” may be used.”

Whilst this does not constitute part of a Code of Practice, failure of a Local Authority to heed the advice could be considered as negligence on the part of that authority.

Every piece of information that I have presented above was put to the council through the Twitter conversation that started with my initial post about sign. As it happens, there are two other indications of the contempt that Bolton Council has for cyclists on the approach to these road works. These are shown in the following two images: 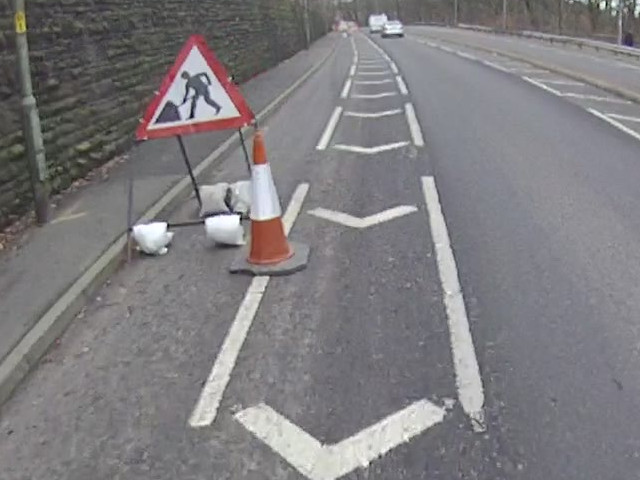 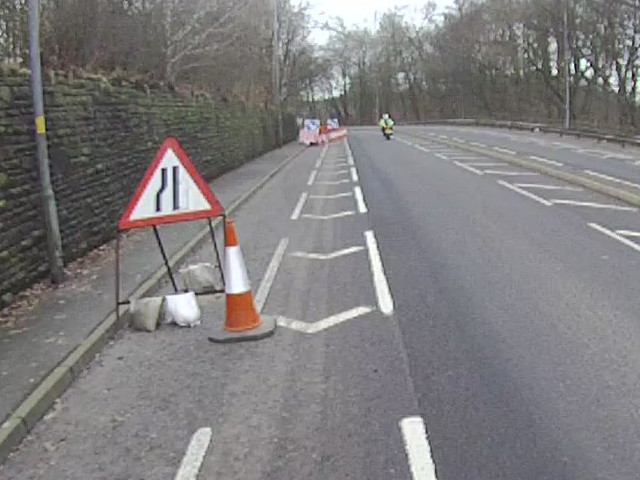 These just serve to emphasize the lack of consideration and frankly arrogant attitude displayed by the Council in its t=rather petulant final response to the Twitter discussion.

Thanks again Bolton Council; what a backward town we are living in.

Addendum (9th February 2015): Here is an image from Leeds showing an example of how this situation should be managed:

4 Responses to Cyclists Dismount: A disappointing attitude from @BoltonCouncil