Why do you … hog the lane at the bottom of Blackburn Rd in Bolton?

Posted on December 14, 2015 by MrHappyCyclist

There is a place that I have to go through pretty much every time I approach home from the south, where I have a lot of trouble from drivers – especially bus drivers – who disagree with my choice of road position and either tailgate very close, or overtake very close as a punishment, or blast the horn, or shout or gesticulate at me, or some combination of these. It is the short stretch of road from the traffic lights at the top end of Bridge Street until the bottom of Blackburn Road just after traffic lights at the junction with Halliwell Road. The stretch of road is shown on this google map:

I take a road position in the centre of the left-most, straight-ahead lane throughout the whole of this stretch, which takes me about 32 seconds from a standing start; or less than that if I get through first set of traffic lights on green. When I took the adult Bikeability training a few years ago, the instructor agreed that this road positioning was the best choice throughout that section.

Note that my speed along there is typically about 16-17 miles-per-hour, which is slightly more than half of the speed limit, so it costs a following driver 15 seconds or less to stay behind me. Note also that they do not have to stay behind me because there is another lane available for overtaking safely if they so wish.

In fact, I didn’t always choose this line, and have made several changes to my approach over the years. The first such change I made was to deal with the left turn lane that filters off to the left shortly after the first traffic lights, shown in this Google image:

I wrote an article about that nearly 5 years ago in January 2011, so you can read that for the details, but suffice to say that I take the centre of the lane from the traffic lights until I am past the part where the lane filters to the left to avoid being left-hooked by careless motorists. At first, I started to go into the cycle lane between the left turn and straight ahead lanes there, and I continued to do that for quite a long time after I wrote that blog article, but more about that later.

The next change I made was to deal with what is probably one of the worst cycle lane designs I have ever used, shown in this Google image:

The problem is illustrated by the fact that the white line of the cycle lane, which actually goes right up to the shoulder of the junction, has been almost completely worn away by motor vehicles crossing it. I would say that about 90% of motorists cut across this cycle lane when taking the bend, like the driver of the bus that can be seen in this image: 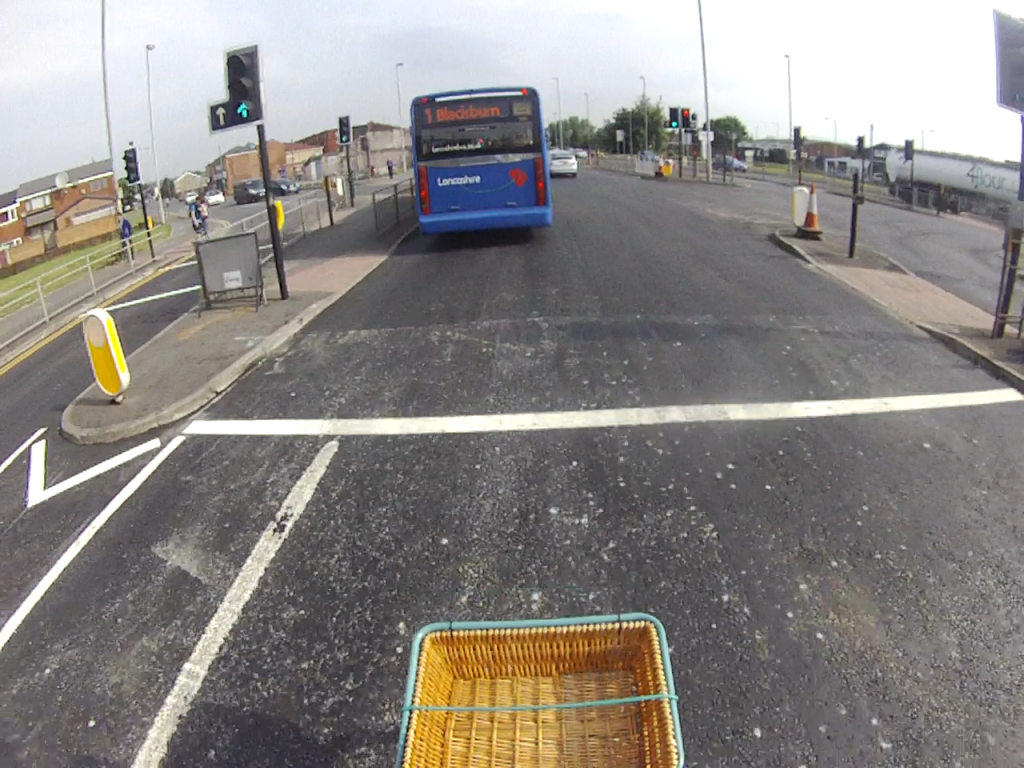 Of course, you might say that they wouldn’t do that if there was someone on a cycle using the lane, but you’d be wrong. I found this incident in 2010 rather too close for comfort:

Two years later I was foolish enough to allow the Arriva idiots to do it again, in an almost identical incident:

Since that day, I have never used that cycle lane across the junction again, except to filter to the Advance Stop Line when the lights were on red and I knew they were not going to change.

There are so many problems with this cycle lane. First, it is a narrow, “advisory” cycle lane; something that has no standing in law and is completely stupid as I pointed out in this article. Moreover, it has been painted across the apex of a bend, which is the reason why motorists tend to cut across it and is sufficient reason in itself why an unprotected cycle lane should never be placed there. To make it even worse, though, there is a steel fence along the kerb so that, in the event that a cyclist is cut up, they have absolutely nowhere to go. This guidance document from Transport for London talks, on page 4, about why this is bad for cyclists, who can easily be crushed against the fence by inattentive drivers, particularly of long vehicles like buses, or the 44 tonne articulated trucks that Nisa insist on using to make deliveries to our local corner shop. I’ve actually had people who claim to be cyclists themselves say that they use this lane and they don’t think there is any problem with it! What? This image alone is enough to show how ridiculously bad it is.

So, there just remains the question of why I no longer use the cycle lane after I have gone past the left turn lane filter until I am approaching the second junction. Well, the simplest answer is that the Bikeability instructor said I shouldn’t, but of course that is advice, not a reason. The reasons are as follows.

First, anyone who enters the cycle lane but does not wish to use it at the next junction will have to negotiate their way back out into the general traffic lane. This of itself is more dangerous than simply staying in he main traffic lane  in the first place.

Third, that narrow cycle lane places a cyclist between two flows of, often fast moving, motor traffic. Furthermore, it does that in the middle of a complex junction, where drivers are thinking about lots of things in addition to not hitting vulnerable road users. In general, these narrow cycle lanes that are placed between two main traffic lanes are dangerous and should rarely, if ever, be used. Just think about being sandwiched between a bus and a truck there; not nice.

Fourth, there is a real danger of cyclists getting hit by drivers who decide to change lanes across the cycle lane. This includes impatient drivers who use the left turn lane to bypass traffic and then cut across (so called “undertaking”); drivers like this idiot:

So, that’s why I am prepared to cause drivers 15 seconds of delay there: to protect my own safety. If you think 15 seconds of your time is worth more than the safety of a vulnerable road user, then you really should not be allowed to hold a driving licence at all.

This entry was posted in Article, Bolton, Why do you...?. Bookmark the permalink.

2 Responses to Why do you … hog the lane at the bottom of Blackburn Rd in Bolton?