The myth of incrementalism.

Posted on January 8, 2016 by MrHappyCyclist

A discussion was kicked off yesterday on Twitter as a result of a tweet by a prominent cycle author and campaigner about a cycle facility that has been installed in Corbridge, Northumberland, pictured here: 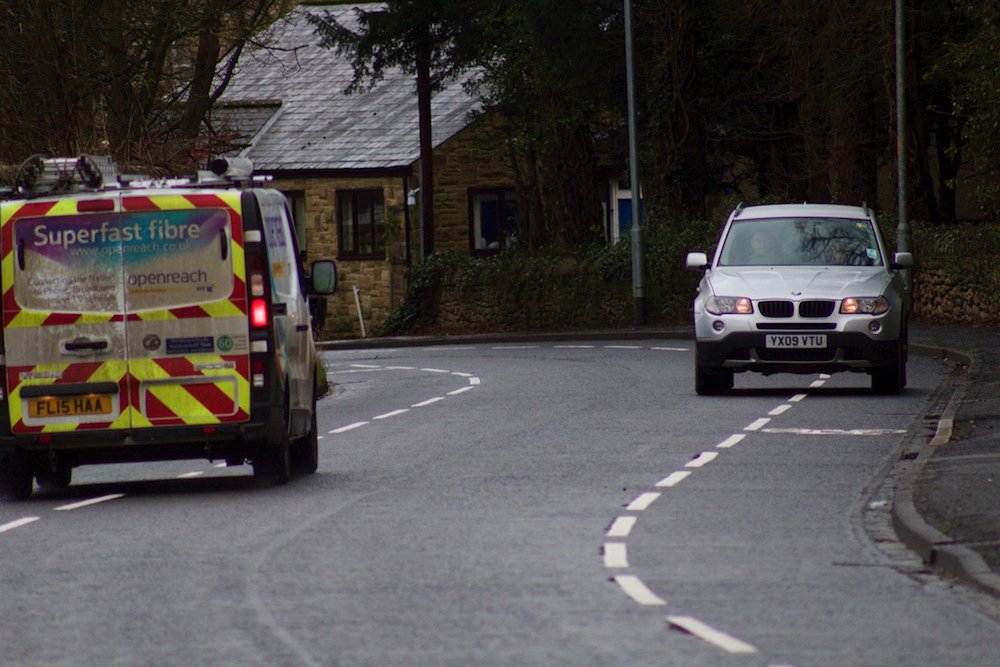 The original tweet was not about the utility of the cycle lane for cyclists, but about the idea that is doesn’t cause inconvenience to motorists. That in itself suggests that there may be something of a compromise involved here with the implication that it is OK to put in some “infrastructure” for cyclists, but only if it doesn’t impact on motorists, who must not be inconvenienced under any circumstances. But more on that later.

Much of the following discussion went on to address whether this treatment is of benefit to cyclists, and one of the assertions that was raised a number of times was along the lines of “it isn’t perfect, but it is a step in the right direction”. I was particularly disturbed to see that view being endorsed by CTC in this retweet:

The idea, which has been pushed many times, being that anything is better than nothing, and is a step on the way to the eventual implementation of good quality infrastructure for people riding bicycles. This is the incremental approach, which seems on the face of it to be a perfectly valid way to achieve progress. In some contexts, that can be a good approach. I’ve even taught it to students of software engineering as a good way to work towards satisfying requirements that are not well-understood; the use of prototypes allowing options to be explored, and gradually increasing functionality to avoid going down huge dead ends. Unfortunately, unlike (well-designed) software, road infrastructure is not easy to change if you don’t get it right, so it is unlikely, given the extremely limited amount of funding available.

In any case, there is no need to make exploratory developments in an attempt to understand requirements and appropriate solutions. There are places where such explorations have already been carried out and the solutions have been refined over decades; one such place being the Netherlands. When the requirements are so well known and there are tried and tested design patterns to allow those requirements to be satisfied, there is no need for incremental development.

However, it is very important when taking on board the lessons from another context such as the Netherlands to ensure that the whole lesson is taken and understood, not just a part of it. During the Twitter discussion, an example was put forward of a place where this same approach works in the Netherlands, showing a picture taken from one of David Hembrow’s excellent articles: 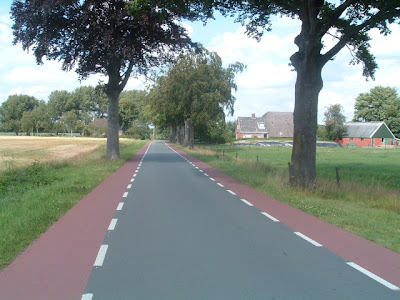 Unfortunately, the poster (tweeter?) appears to have failed to read the article that the image was taken from, which states among other things: “Note that the road in [this] photo is empty of cars. That is the normal state and the result of a deliberate policy to unravel cycling routes from driving routes which extends right across the country and along country roads as well as within cities”. It is clear from other information, e.g. this series of posts from @lastwheel, that the context is totally different. The lesson from the Netherlands that is being used to back up the assertion that the Corbridge facility is a useful step in the right direction is similar only in the fact that there are two dashed white lines on the road. All of the other elements of the Dutch solution are being ignored totally, including the important use of coloured tarmac to give the impression that the road is narrower than it is – the Corbridge example does no such thing – and even more importantly the “unbundling” of roads to remove traffic from the route.

It might be thought that facilities like the Corbridge one are worth a try because, apart from possibly wasting money, they are at worst harmless and may have a positive effect, however small. It is asserted that they may get a few more people cycling, which would at least demonstrate that there is a demand and thereby increase the chances of real resources being allocated. But even that assertion is seriously questionable. It has been reported many times by many people on bicycles that “advisory cycle lanes” (i.e. the ones marked by a dashed white line) actually make the situation worse for existing cyclists. I wrote about that a couple of years ago, based on my own experiences, in this article and discussed many of the issues 18 months ago in this article about some proposed schemes in Salford.

The point is that a facility like this is unlikely to allay the fears of those who are currently afraid to ride a bicycle on the road (or to allow their children to ride one), but will actually make the experience worse for those people who are currently prepared to share the road with motor traffic. Bikebility training teaches us that the safest approach to sharing a road like this one with motor vehicles is to take your place in the centre of the traffic flow. Unfortunately that often results in intimidation and bullying from motorists who believe they have the right to travel along the road without any delay and are prepared to use their vehicle as a weapon to assert that perceived right. Cycle lanes such as these serve only to reinforce that belief and cause such motorists to become even more enraged at the cyclist who is not riding in the gutter “where they should be”.

Facilities like this one are not an incremental step towards the implementation of good cycle infrastructure – a “step in the right direction” – they are a step in the wrong direction and serve only to allow a local authority to tick a metaphorical box marked “done”, and to do that without upsetting their local motor lobby, and then to rest on their laurels.