Some Spanish cycle infrastructure: not perfect, but decades ahead of the UK

We recently enjoyed a 3 week holiday in Spain and I was surprised by the quality of the cycle infrastructure that we encountered there. Whilst they had the advantage, in the area we stayed, of a lot of fairly new building (“urbanizacion”), they have done a pretty good job of providing for cycling – far better than I’ve seen at home, even in new build developments.

First, here is a gratuitous picture of a cycle way along the sea front at Torre de la Horradada; a couple of miles from where we were staying: Yes, it’s a very nice place. if you want a relaxing beach type holiday. The cycle track is an example of the best facilities here, but a lot is up to this standard, as seen in the photographs below: 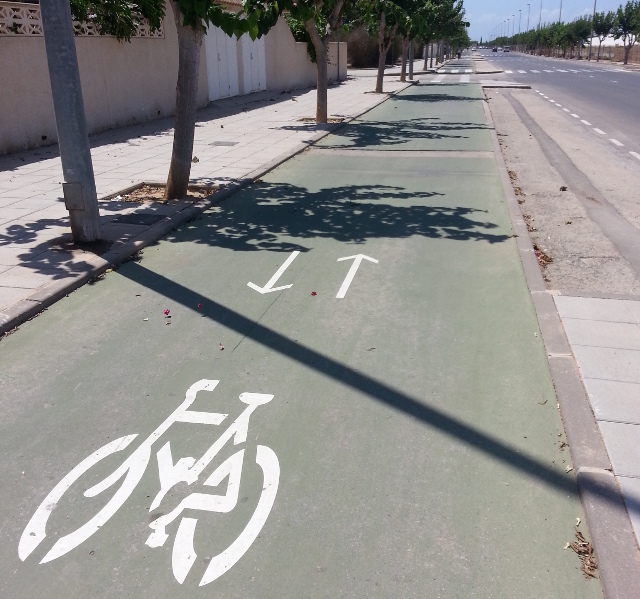 These are all examples taken from within the urbanizacions, where the speed limits on the roads are typically 40kph or less. Note that the cycle path usually has priority over side roads, and I found the drivers there to be exceptionally good at taking care and respecting that priority. It’s still important to be vigilant, of course, because drivers can still make mistakes, and some of the drivers might be British tourists.

For longer distance trips, there is a separate cycle track alongside the bypass that runs all the way up the coast, with a similar standard of provision: It’s interesting that, despite this, you still see a lot of cyclists using the road here, which is a 70kph dual carriageway. I was rather puzzled by that, but have to realize that I am looking at it from the point of view of a tourist on holiday. For serious commuting, I would still find the dedicated infrastructure frustrating as it involves some tortuous sections where the bypass goes through some of the towns. A regular route that I have been using there would typically take me about 40 minutes to travel 6 miles. At that speed, it would have taken me an hour and a half to do the 12.5 miles I used to travel to work; a journey that I used to do in less than an hour on the roads at home. (50 minutes in fact.)

It is noticeable that you don’t see many Dutch style bikes here, but that is not surprising if you look the opposite way at the point the previous picture was taken from: I was in bottom gear on the granny ring up here on the mountain bike I borrowed for the holiday. Similarly, I don’t think I would have been riding up this on my Elephant Bike: Just sticking with the protected cycle ways for a bit longer, it is worth looking a little more closely at some of the junction treatments. They’re almost there with these, but it was a shame that they could have been so much better. Here is a typical example of where a protected cycle path crosses a side road. The side road is one way (exit only), it has a speed limit of 30kph (18.6 mph) and it is well sign-posted to show that both pedestrians and cycles have priority here. But it’s a shame that they didn’t use the levels to emphasize this. Note that the cycle way and the pedestrian crossing both go down to the level of the road here. It would have been so much better if they had implemented a continuous footway and cycleway and had the road going up to the level of these, making it plainly obvious to a driver that they are crossing priority tracks rather than the other way around. I suspect it might even have been cheaper to construct as well.

In some places, the side roads have priority such as this one: It wasn’t always clear why they had done this as the road seemed to be quite similar to ones where the cycleway has priority, but there may be a good reason that I’m not aware of.

I also saw some examples of roundabout treatments that look similar to ones I saw in Amsterdam: These are not perfect as the crossing points are a bit close to the roundabout, but they do seem to work very well. Motorists generally stopped whenever I approached the crossings, but traffic was light anyway and speed limits quite low: 40kph here (25 mph).

The one exception to this driver courtesy was from a taxi driver. This was the only time I had an argument with a motorist during the whole three weeks. It was when I approached this cycle crossing, which is part of the cycle route along the bypass: As I approached this crossing, pretty much where I took this picture from, it was clear that the driver, who was approaching from the left exiting a big roundabout, was not going to stop. So, when I got to the kerb I stopped. The driver then slammed the brakes on and stopped with the front of the car just entering the pedestrian crossing and started yelling at me in Spanish. When I held my hands out to show I didn’t understand what the problem was, he pointed at the pedestrian crossing and yelled “Is for walk!” and continued to berate me. I pointed to the cycle crossing and replied in my broken (and probably incorrect) Spanish: “Via para ciclo!” and he drove off, still shouting. It is possible that he didn’t see the rather faded paint on the road, but I would have expected a local taxi driver to be aware of it, especially given the signs he should have seen on the approach: However, given that I must have done around a hundred miles on the bike during the holiday, I reckon just one single problem with a driver is pretty good going.

There are other places were care needs to be taken, such as this point where the two-way cycle track crosses to the other side of the road. However, this again is on a road with a 30kph speed limit and very light traffic. 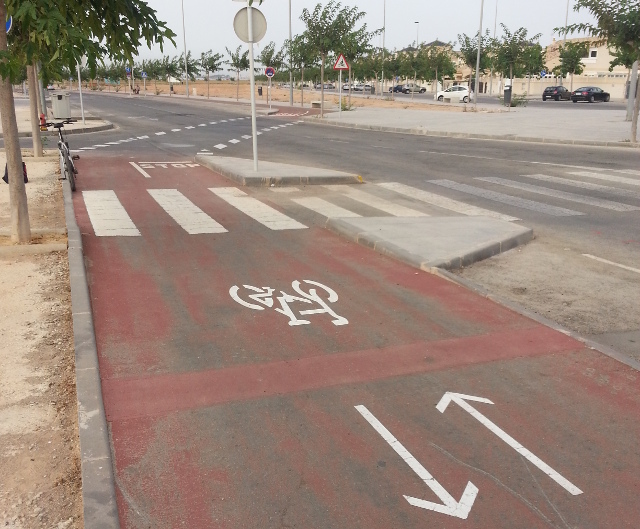 A much more scary crossing was this one, which is on the entry/exit of a roundabout on the 70kph bypass. In both directions, you have to look backwards over your shoulder as you approach the crossing  to see whether anything is coming, and the drivers often were travelling well in excess of 30kph. I found the best strategy here was actually to get onto the main carriageway well in advance of the crossing and claim the lane.

There are also many places where paint is used to define the cycle path, such as this one, which is a two-way cycle path alongside a one-way street: However, this does not present a problem as, again, the road has light traffic and a 30kph speed limit: It is the case that, in every place where cycles have to share the road with motor vehicles, including those that have a painted cycle lane, the speed limit is set at 30kph.

Where a cycleway has to cross a faster road, the cycle crossing next to a pedestrian crossing tends to be used. This road has a 40kph limit. Where cycle actually have to share the same carriageway with motor vehicles, as well as having the 30kph speed limit, it is common for the street to be declared a “Ciclocalle”: This translates to “Cycle Street”, though it is different to the Dutch cycle streets in that they usually do carry through traffic. I was particularly please to see the use of sharrows in the centre of the lane in these locations to show where cyclists should be expected to ride; particularly important when there is car parking at the side of the street as here.

Overall, despite my criticisms above, I was pretty impressed with what I found there. Cyclists do not seem to be treated as an “out group” either by the authorities or by the drivers. The only times I felt a little like a member of an out group was when visiting the naturists’ beach, where this is the cycle (and pedestrian) provision, but that’s another story. This entry was posted in Article, Safe Cycling, Space for Cycling. Bookmark the permalink.