Safety and Numbers: the sad case of Bolton.

Posted on January 14, 2017 by MrHappyCyclist

The correlation is clearly apparent in the graph shown in Figure 3 of this research paper, which shows the level of cycling on the X axis against the risk (cycling casualties per thousand riders) in each of a number of towns and cities across England. The report was brought to my attention particularly because of the position of my home town of Bolton at the top left of this graph. I have long maintained that Bolton is one of the worst (most unpleasant) places in the country to ride a bicycle and has one of the lowest levels of cycle usage, and this graph supports that view. It also supports very clearly the correlation between real danger and low cycling participation levels

So why is this correlation unsurprising? Well, because if the roads are dangerous, or feel dangerous, then people will be reluctant to cycle on them. Real or apparent danger leads to avoidance, and people do feel that riding cycles on the road is dangerous. This is not only obvious; it is supported by research such as the Bike Life survey carried out by Sustrans.

The report unfortunately draws the fallacious conclusion that this correlation shows that having greater numbers cycling will lead to increased safety for cyclists. That assertion may or may not be true, but it doesn’t follow from the data presented, despite the clear correlation; correlation on its own can never be assumed to imply causation.

The implication of the report, and its conclusion, for Bolton is that all we need to do is get more people cycling and the roads will suddenly become much safer for those riding their bikes. The reasoning for this is that drivers will be more aware of cyclists, so will no longer accidentally run into them, and that drivers will be more likely to be or know a cyclist themselves, so will be likely to have more sympathy for the needs of cyclists on the road. Unfortunately, even if true, this is useless; no amount of cajoling will get more people to ride cycles on the hostile roads of Bolton – common sense and history support that view.

Below is a system diagram showing the most obvious factors at play here. The “safety in numbers” assertion made in the report is shown in the red vertical line on the left, with the main mechanism claimed for it shown in the red curve between “Numbers” and “Driver awareness/education”. 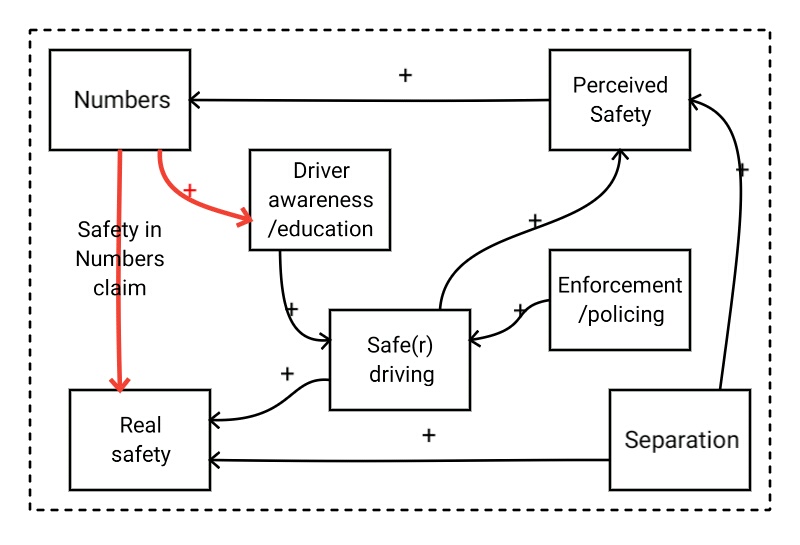 I would assert that the most important factor affecting numbers cycling is perceived safety, and that is supported by many studies, including the Sustrans study I linked above. That perception is determined primarily by the standard of driving, and the degree of separation between people on cycles and motor vehicles. Even if the safety in numbers assertion is correct, there is a feedback loop in this system that ensures that numbers can never be inccreased without other measures from outside the loop: poor driving -> perceived danger -> low numbers -> poor driver awareness -> poor driving.

I am of the opinion, as a result of my own expriences of riding bicycles here and interacting with the Bolton police, that lack of police attention is a significant reason for the extremely poor safety record of Bolton. In the short term, the only way to break that circle is for the police to start paying attention to the problem; something that other police forces are doing successfully. Unfortunately, policing priorities here do not give me any hope that this will happen soon, and it anyway addresses only one of the factors that influence the willingness of people to ride a cycle on the roads.

I would further assert that the only reliable way to break out of that loop is to redesign our infrastructure so that motor vehicles are kept away from people on bikes as much as possible, and that where the two do have to interact, speeds are kept low and the interaction is designed to be as safe as possible. Fortunately there is a way to do this, known in the Netherlands as “Sustainable Safety”, which is explained very well in this video from the USA. Even more fortunately, it is already very clear that the investment required to implement these measures will pay itself back many times over: 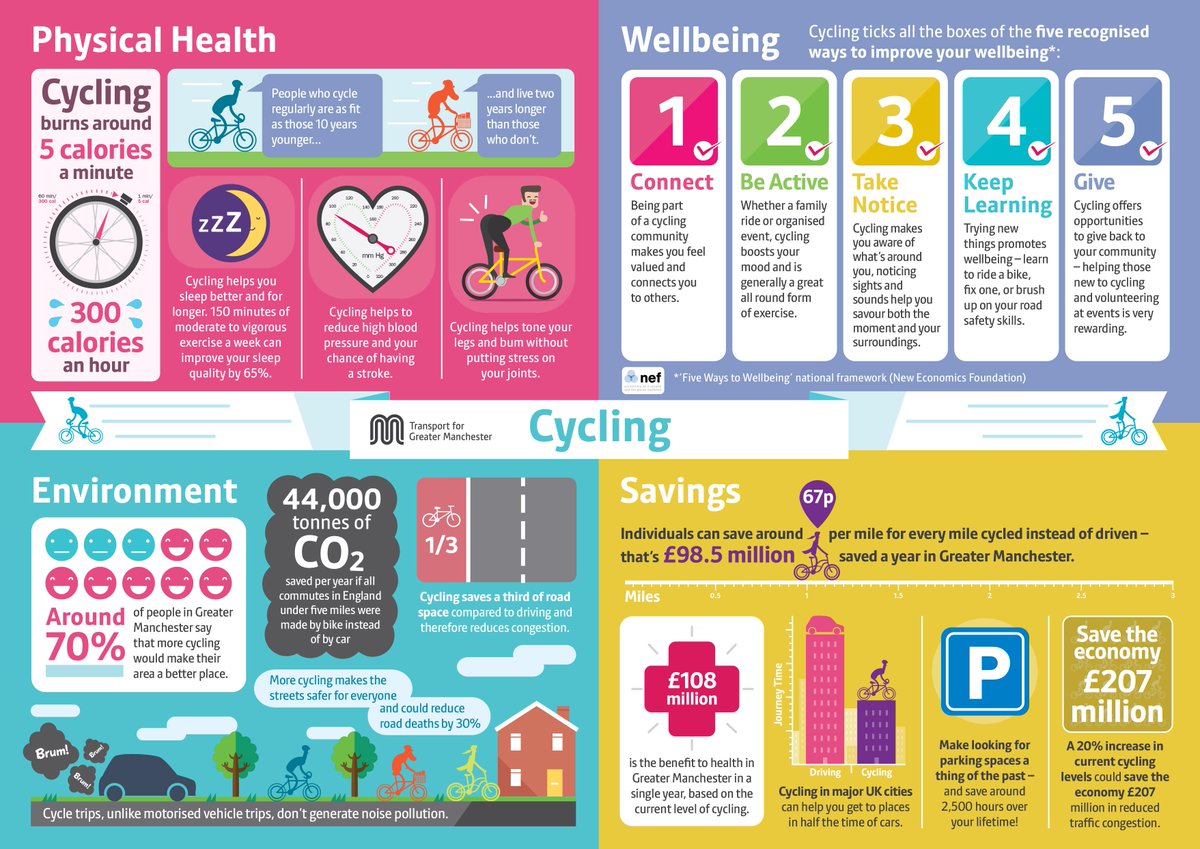 and will result in benefits to far more than just cyclists or potential cyclists.

So come on Bolton, do we really wish to be the “sick man” of the whole country as far as cycling is concerned when we could improve our whole environment so effectively?

4 Responses to Safety and Numbers: the sad case of Bolton.