Getting the message across.

Posted on February 22, 2017 by MrHappyCyclist

What does it means to “get the message across”? Is it sufficient to make sure that your language is grammatically correct, that you always ensure your statements are truthful and supported by evidence, and that you always say precisely what you mean in an unambiguous way, or is there more to it? I would say there is a lot more to it, and I often feel frustrated when people don’t (in my opinion) manage to address what I see as the most important aspect: pragmatics. This is a fancy name in linguistics for the very important consideration of what you hope to achieve in the world by putting out a message, and how your message might, or might not, achieve that. The famous linguist Noam Chomsky introduced the term Pragmatic Competence to refer to this idea of considering the effectiveness of messages in achieving the desired result.

For me, one of the most significant shifts in cycle campaigning in the last year is the change that is taking place across many police forces as a result of an initiative by West Midlands Police called Operation Close Pass. This initiative, based explicitly on clear evidence, is aimed at changing the behaviour of drivers so that people riding cycles are less likely to be put off by real and perceived danger. This is not the be-all-and-end-all of cycle campaigning, but it is a very important step forward. I used the West Midlands initiative in a previous blog article to illustrate how comparatively poor the record of Greater Manchester Police has been in failing to deal with this issue, though I am pleased that GMP’s Traffic Division is now taking on board their ideas to create an initiative of its own.

However, despite the brilliance of the West Midlands Police initiative, I have still been frustrated by what I see as shortcomings in some of the messages coming across – particularly in relation to the pragmatics of the message. I think this is important because we often get only one chance to get it right.

I’ll start with what I see as a huge failure of pragmatics, which is the widespread use of the slogan: Share the Road. This message has many things wrong with it and is criticised very effectively and fully in an article on the As Easy As Riding A Bike blog, but the specific pragmatic failure is captured well in one of Bikeyface’s brilliant cartoons: 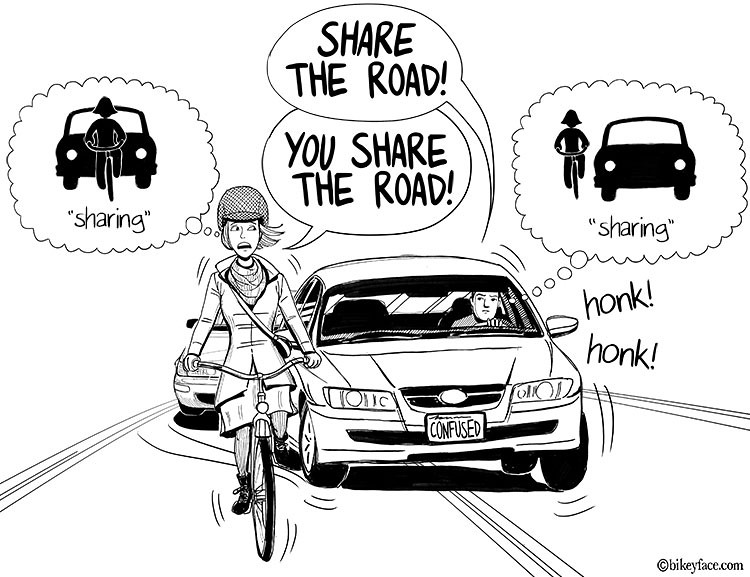 The problem here is that the message means a completely different thing to the kind of driver who already has an over-inflated sense of entitlement to use the road unobstructed, and so has the opposite effect to what was intended. I have experienced exactly the situation depicted in Bikeyface’s drawing on more than one occasion, with the driver shouting exactly the same words.

One element of the close pass operations that I mentioned earlier is the use of a large printed mat to make clearer to drivers what is meant by “sharing the road” with cycles: 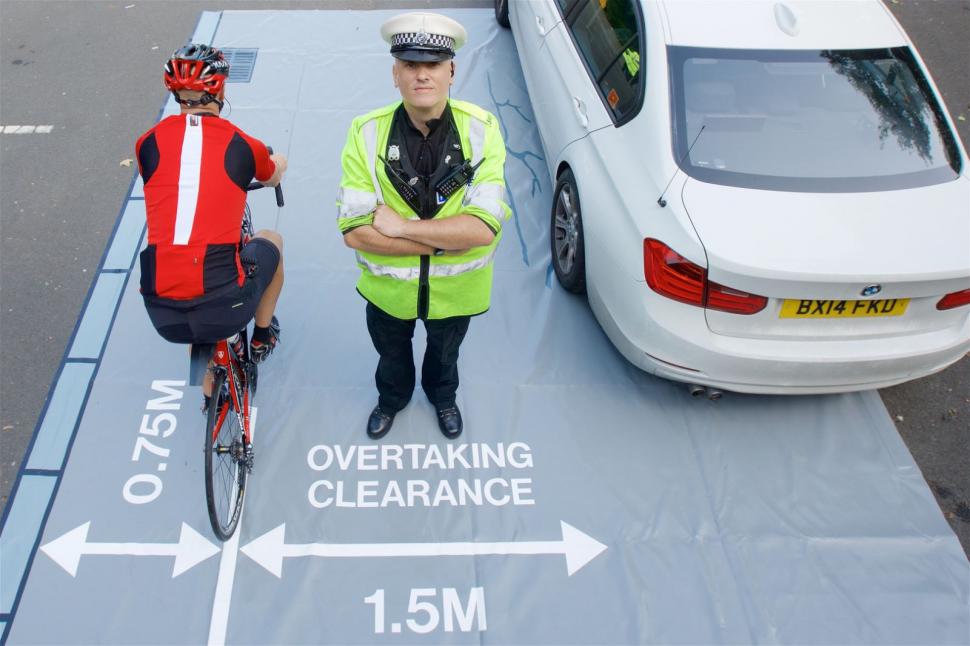 This image was created by West Midlands Police for use in their publicity materials, and is now being used by other forces, including Greater Manchester. It attempts to make clear to motorists that they should be leaving 1.5 metres of clearance between their vehicle and the cyclist when overtaking. That message is far better than “share the road”, even though the distance quoted relates to overtaking at 30mph and is still inadequate at higher speeds and even though the arrow shows 1.5m from the wheels of the cycle to the wheels of the car rather than from the right side of the rider to the door mirror.

However, the huge problem with the message, a problem of pragmatics, relates to the 0.75m arrow between the cyclist’s wheel and the kerb. The intention behind this part of the message is to make drivers aware that cycle riders should not be expected to ride in the gutter – that they should be expected to ride well away from the kerb. Again a very good intention, but likely to backfire. The 0.75m distance represents what is called “secondary position” in cycle training manuals. In fact, secondary position is defined far more loosely than 0.75m and depends on the nature of the road, the conditions, and many other factors. Moreover, any person who has taken Bikeability training will have been taught that in many situations they should be riding much further out, and often in the centre of the lane or carriageway. This is made very clear in the Government’s Think! campaign posters: The problem with the 0.75m message in the WMP’s Close Pass educational mat is that the kind of driver at which the initiative is targetted is very likely to take this to mean that people should never ride cycles more than 0.75 metres away from the kerb. Some of those drivers will take any “failure” of someone on a cycle to adhere to that limit as a cue to pass too close – to perform a “punishment pass”. After all, “why should I uphold my end of the bargain if they won’t uphold theirs”. Yes, this really is how some people think.

An attempt has recently been made to address this problem in the message, by a friend of mine in Greater Manchester Cycle Campaign. He has modified the image to look like this: 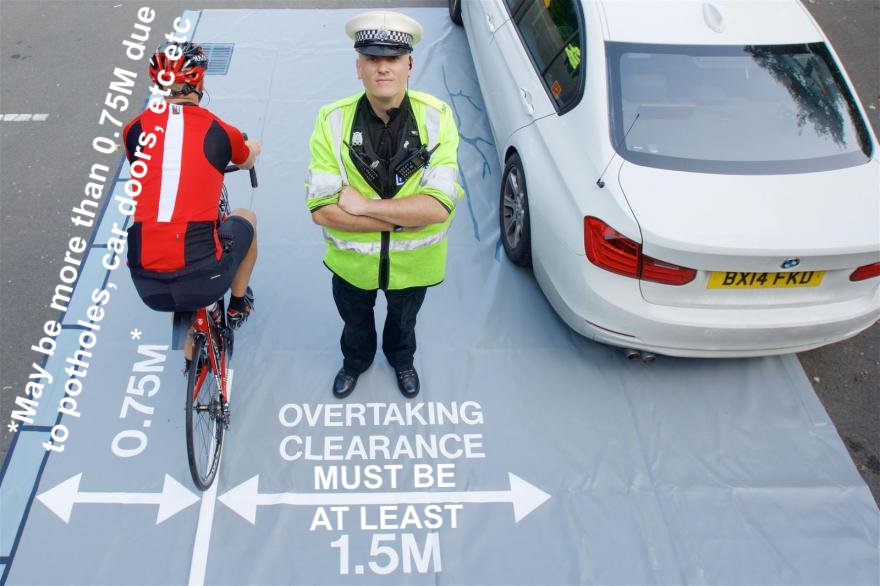 Unfortunately the change to the 0.75 metres message is still liable to fail in its intention. It is possible to interpret the message to mean that cyclists should be expected to stay within that 0.75 metres except when there is a clear “excuse” for not doing so, such as potholes or parked cars, for example. In that interpretation, it still fails to achieve its pragmatic aim, which is to make clear to drivers that cyclists have a right to choose whatever road position they feel is appropriate to maintain their own safety, and that drivers are under an obligation to respect that choice irrespective of their own opinions on the reasons for it. Indeed, one of the main reasons for riding in the centre of the lane is to prevent drivers from trying to overtake where the cyclist feels it is not safe to do so. The obligation is to drive with great care around vulnerable road users even if you think they are being a prat – even if you think they are “taking the piss”. Cyclists do not need to have an “excuse” for riding well away from the kerb; it is their right to do so and under no circumstances does a driver have a right to endanger them either deliberately as punishment or by taking risks in order to get past.

I wonder whether perhaps the gap between the cyclist and the kerb should simply be removed from the mat, and that part of the message put across in another way completely, such as this one:

Perhaps even modifying the text on the left even more to say “ … when they feel there isn’t enough room for safe passing, irrespective of what you might think“. That really is the core of (that part of) the message and seems far less open to misinterpretation, either accidentally or deliberately.