Police action – the next step.

Posted on June 6, 2017 by MrHappyCyclist

Back in March, I wrote an article about the work that the Traffic Division of Greater Manchester Police were/are doing to address the problem of dangerous driving around vulnerable road users such as cyclists. I mentioned in there that the next stage would be the introduction of a system to allow members of the public to make reports about driving that endangers either individuals, such as close passing of cyclists, or people in general, such as driving whilst using a mobile phone or jumping a red light. In fact, they started to trial such a system with a small number of users, including myself, at the beginning of April and opened it up for anyone to use last Tuesday via an announcement on Twitter: 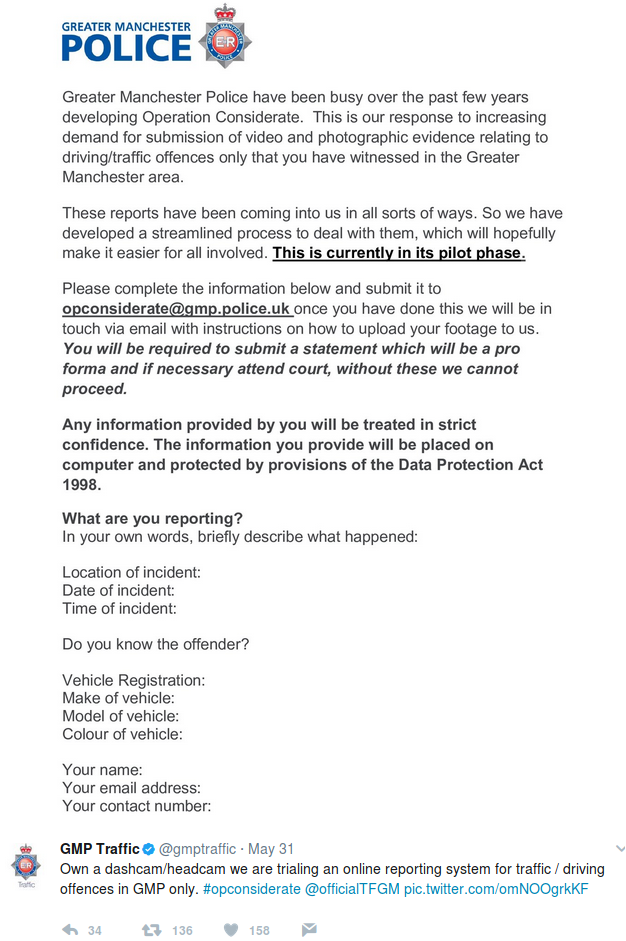 Needless to say, I have been delighted by this development. Anyone who has read my blog before will be well aware of my frustration, also shared by others, with the way the police have dealt with near miss incidents – or rather failed to deal with them – largely because of the way the organization was set up. In the past, it was possible only to make reports either in person at a local police station or over the phone using the 101 service. The matter would then be passed on to the local police covering whichever location the incident occurred in. I would then have to wait for a call back from an officer in that section, who would make an appointment for me to go to the police station, with a DVD containing the video file, to give a statement. This statement would then be escalated to a supervisory level, where it would more often than not be flagged “no further action”. This whole process would typically have taken up half a day of my time, and probably several hours of a police officer’s time, all for nothing. When I have complained about this in the past, I found I was dealing with officers who really do not understand the issues, even having no idea about things like recommended road positions for cyclists or the obligations on motorists in relation to vulnerable road users. Of course, all of this is not really surprising; after all, local community policing units have different priorities and limited resources.

The new system is both significantly more efficient, because of the use of IT for most of the communication, and far more effective, because the matter is dealt with by people in the Traffic Division who really do understand the issues. I have long been impressed with the people in the Traffic Division, but was always frustrated that we could not reach them directly. This has now changed and is a vast improvement. In terms of efficiency, I would say it costs about half an hour of my time to deal with each incident, including processing the video and preparing a statement, and I am told that it takes an officer about 15 minutes to deal with it at the police end, up to the point where a decision is taken on whether and how to proceed. This is a huge time saving for all concerned.

Since starting on the trial at the beginning of April, I have submitted 18 reports and the majority of these have been taken forward by the police, who usually offer the driver a choice between attending an approved driver awareness course (at their own expense) or, if they refuse, paying a fine and receiving 3 penalty points on their driving licence. If they have already attended such a course, they will not be given that choice. A few others have been dealt with by means of an officer speaking to them and serving a warning under Section 59 of the Police Reform Act 2002, which I have written about before in this article.

I will write more about this, and possibly include some examples of incidents and how they have been dealt with. At the moment, I am unable to publish most of those as the cases are ongoing and I don’t want to risk prejudicing them.

All in all, this is an extremely encouraging development, which builds upon the excellent work of West Midlands Police, and the team at Greater Manchester Police are to be applauded for it, especially Inspector Paul Rowe, and PCSOs Gareth Walker and Stephanie Payne. Thank you for the good work folks!