Posted on September 16, 2017 by MrHappyCyclist

Last week, Bolton Council opened the new transport interchange, consolidating bus and rail transport on the same site. Apparently the project cost £48 Million. Further money will be spent on a multi-storey car park to allow people to drive to the interchange, and a significant amount of money was spent on completely rebuilding the roads on two sides of the development: Great Moor Street and Newport Street. On the face of it, the development looks quite nice, but does the design really work for what is, in my opinion, a failing town centre? Let’s have a look at a few pictures.

This image shows the view towards the south along Newport Street; the entrance to the interchange is just visible on the left: 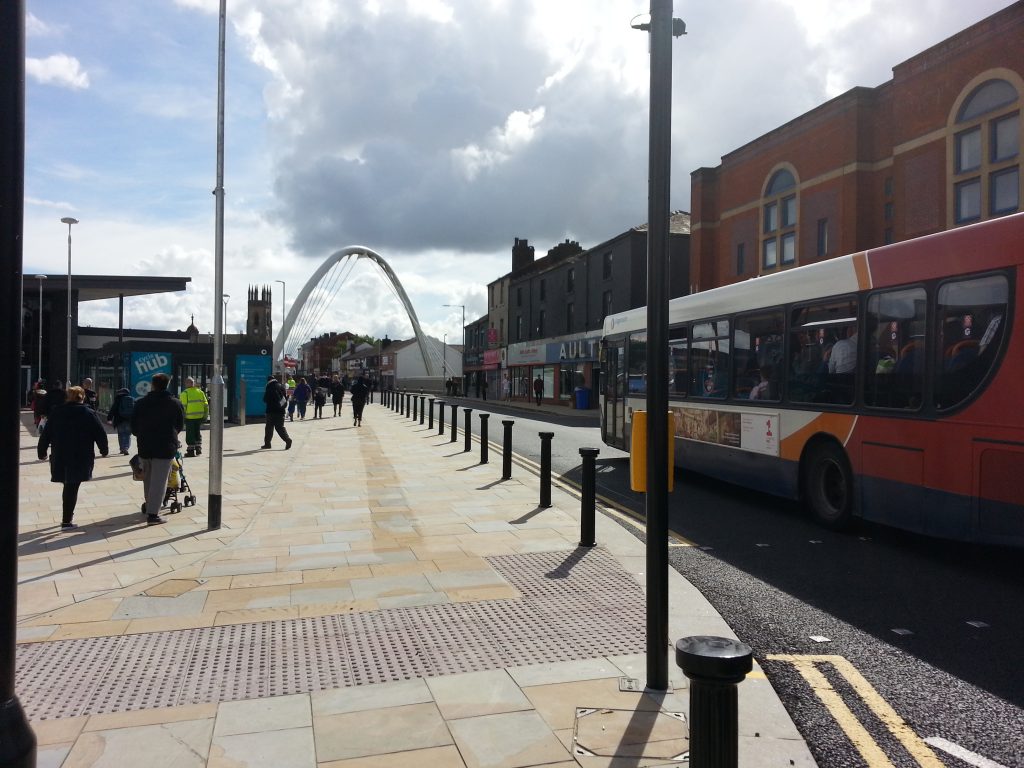 As the main thoroughfare for people walking into Bolton from the railway station at the far end, this street has previously been referred to as “The Gateway to Bolton” on account of the distinctive bridge that can be seen in the background. Four years ago, at Bolton Cycle Forum I suggested that, as part of the design for the new interchange, one lane of this two lane one-way street could be turned into a bi-directional cycle way. This thought was immediately rejected by most people there. (I previously mentioned that experience in this blog article.)

There is (was) the potential for this street to become a thriving space for people to enjoy but the end result, as can be seen in the picture, is still just a two lane thoroughfare for motor vehicles, which, ironically, are travelling away from the town centre. A few days ago, my wife and I went into one of the cafes on Newport Street for lunch. Whilst there we asked about how trade is since the interchange opened and were disappointed to hear from the staff  that trade had gone down since it opened. It is clear why this is the case, because the interchange provides a covered walkway from the railway station at the far end of the street to the new bus station on the left of the picture, allowing pedestrians to bypass the motor-choked Newport Street entirely. No doubt even more shop units will be empty soon.

One could be forgiven for expecting that people on cycles would be well-catered for here. After all, the new “cycle hub” that has been created as part of the development can be clearly seen to the left of the picture. In fact, “cycle hub” seems to be just a fancy name for a bike shed containing a bunch of Sheffield stands and a track pump, but it shows that cycles are being thought about … you might think. Surely, given that Newport Street and Great Moor Street have been completely rebuilt, the opportunity must have been taken to provide cycling routes to and from this “cycle hub”? Well, here is another picture of Newport Street, taken from the other side of the road: 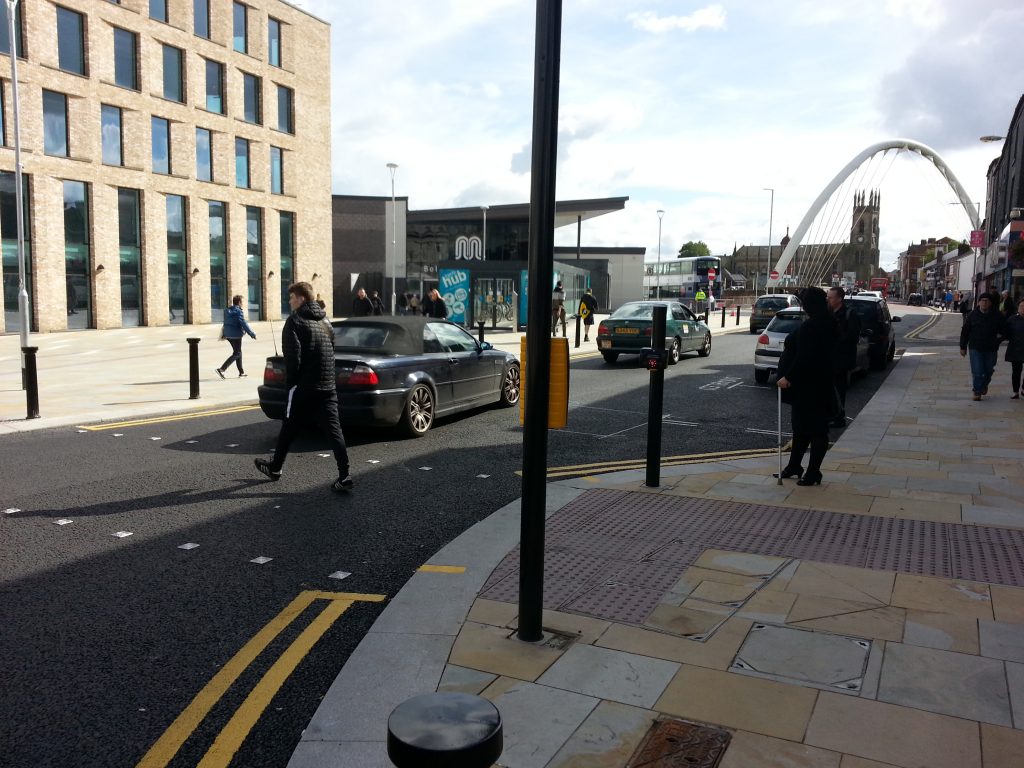 There is absolutely no provision for cyclists whatsoever. A cyclist who wants to head south from the interchange and its cycle hub has no option other than to mix it up with buses (a lot of them), taxis, cars and trucks. The road does not even have a 20 mph speed limit. Moreover, traffic that is using this route has been given a brand new, wide sweeping bend into Newport Street to that they don’t even need to slow down much: 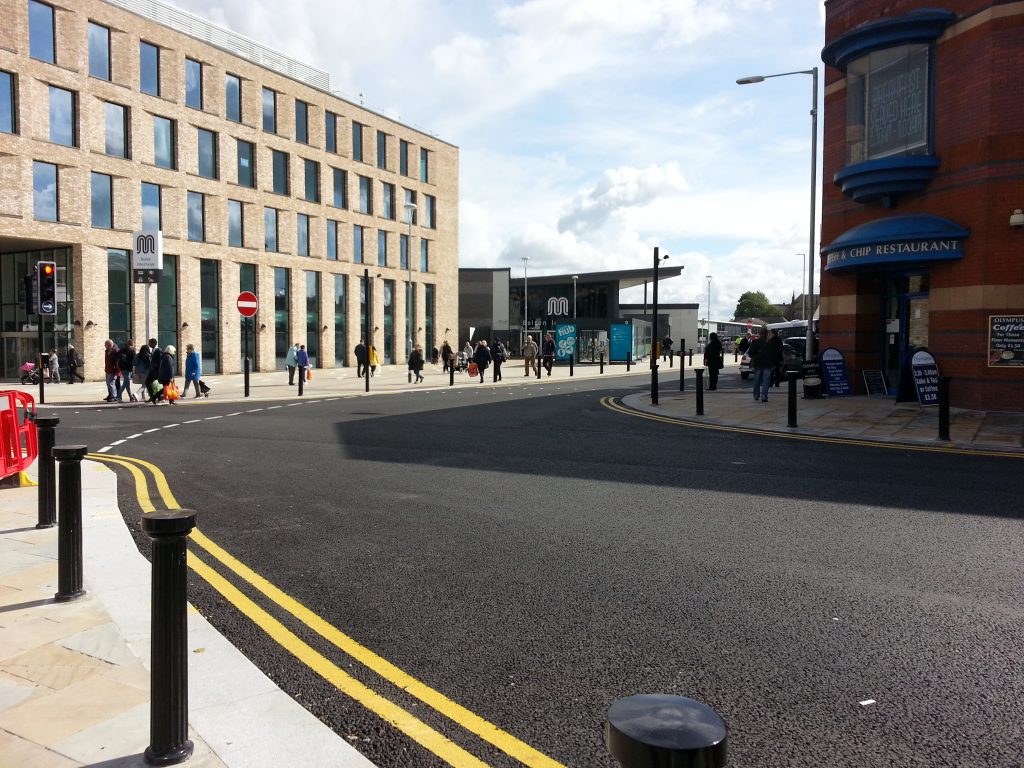 (Mustn’t slow down the sacred motor vehicles – oh no.)

I challenge someone from the council to look me in the eye and tell me there wasn’t enough money in this £48 Million project for cycle provision or, after looking at the three pictures above, that there isn’t enough space available!

Note that this is the only route available for people on cycles who want to travel south from the cycle hub. There used to be an alternative route, which was to go east along Great Moor Street, then south along Bradshawgate – a route that I used to use until recently when travelling across town on my elephant bike to pick up my granddaughter from school – but that is no longer possible as we will see below: The street in the centre of the picture is Great Moor Street. Before the development it was a two-way street; now it is one-way from the end shown until half way along, where the exit from the bus station (on the right) is for buses, which are able to be driven down to Bradshawgate at the other end. Again, there is no provision for cyclists at all on the brand new road layout, so again anyone on a cycle must mix it with buses, taxis, cars and trucks. Just as with Newport Street, I would challenge anyone from the council to argue there is not sufficient space here; just look at the picture below! 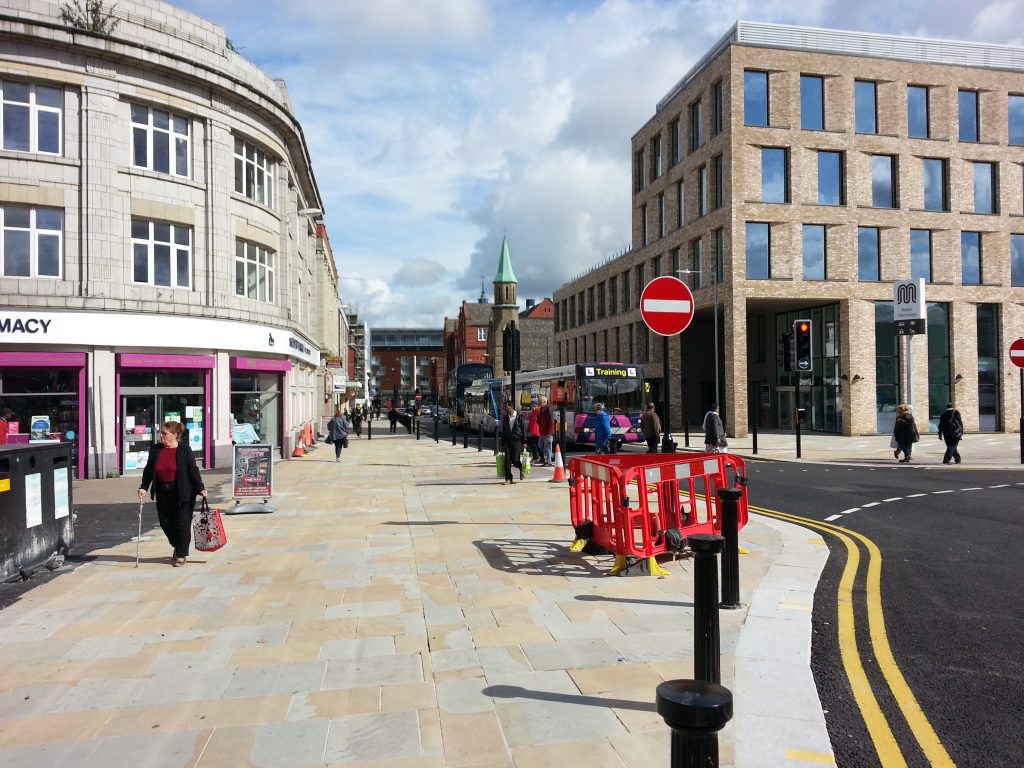 What’s more, this was the most suitable route for people on cycles to travel from this point, where the cycle hub is, towards the north or the north-east. There is easily enough space here to put in a bi-directional cycle way and still have huge wide footways for people to enjoy the space. The left hand side here has a number of cafes on it, which would benefit hugely from good cycle access. But no, anyone on a bicycle who wants to go in that direction must ride south down Newport Street with 2 lanes of buses, etc., then east down Trinity Street, another very busy two lane highway where you find yourself riding through the scrum of motor vehicles at the taxi ranks and rail passenger pick up points, then north along Bradshawgate to get to the other end of Great Moor Street; almost completely circumnavigating the whole interchange on very hostile roads before they can continue their journey.

Finally, turning around 180 degrees at the position of the last picture, we can see the last of the three roads leading to or from the cycle hub: This is the route you would take to go west or north-west. To get onto it, you would have to walk your cycle across Newport Street to the front of the fish & chip restaurant on the left of the picture. Again, just more of the same: acres of space available, newly laid tarmac and very wide footways, and not even a thought for people wanting to travel by cycle.

All in all, this is an utterly disgusting waste of an opportunity. There is absolutely no excuse for it, but it just reflects the general attitude of Bolton Council, which is captured very succinctly in this picture I took of one of their information signs: 2 Responses to Bolton Transport Interchange – an exercise in missed opportunities.