Posted on January 28, 2018 by MrHappyCyclist

On Friday, I attended the magistrate’s court as a witness in a trial for driving without due care and attention. This was the first case to come to court as a result of Greater Manchester Roads Policing Unit’s online submission process, carried out under the Operation Considerate banner, which I wrote about last year. Most drivers accept the offer of attending a driver improvement course (at their own expense), but this one was too arrogant to accept that his driving was bad. The trial related to a report I submitted to them in April 2017, with video evidence showing a car being driven past me too close at speed. Here is a shortened version of the video:

My own analysis of the video showed that the car was about 0.6 metres away from me when it was driven past, and was travelling at about 30 mph, though this figure for the speed was not mentioned in court.

The result of the trial was that the defendant was found guilty of driving without due care and attention, resulting in 3 penalty points on his licence and £825 total in fines and costs.

I have to say that I get no satisfaction from this, and actually bear no malice towards the driver even now, but I do feel it represents a significant milestone in the campaign to bring about a change in the culture on our roads. The purpose of this blog article is to see what can be learned from the case. I should mention that I am not a lawyer, so this is all my own lay opinion, albeit a fairly educated one.

The case required the magistrates to come to a view on two questions: “was an offence committed by the driver of the car in the video?”, and “was the defendant driving that car at the time?”. I will say nothing about the second of those, though it was an issue, but will concentrate on the first.

I have written before of my concerns regarding the interpretation of video evidence presented to court. In this case, the information available to the magistrates consisted of a slightly longer version of the video shown above and a monochrome printout of this page showing still images from the video: 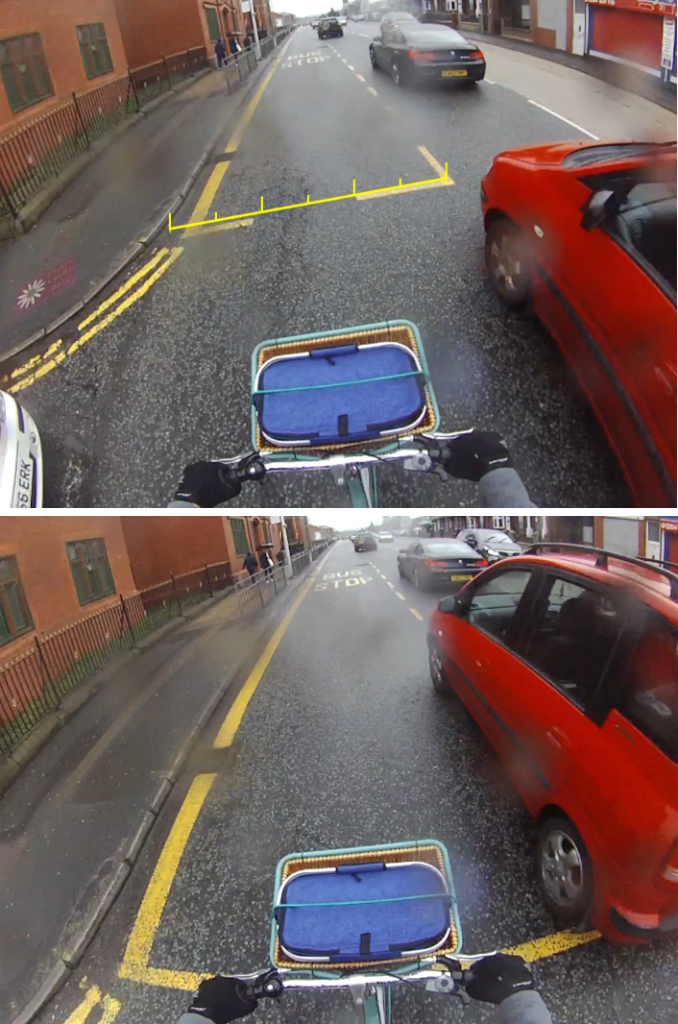 I stated in my evidence that I had measured the width of the bus stop markings, which are 3m wide from the kerb to the outer yellow line.

The court viewed the video several times and examined it in some depth. It is pleasing that there was no argument in court about how far away the car actually was. I do not know whether that would have been the case if the court had viewed the video alone without the benefit of road markings for comparison, but I am encouraged by what I have seen.

I also wrote earlier about my concerns regarding perceptions of how bad an incident needs to be before it constitutes an offence. This is an area in which the law is actually quite vague, and was one of the main lines of argument from the defence counsel, so it is worth saying a bit about this aspect. In particular, the defence arguments included assertions that I interpret as follows (my wordings):

As a witness, I did not really get a chance to argue against any of these assertions and I was not, of course, party to the deliberations of the magistrates, so it would be inappropriate to comment on how they were interpreted in this particular case. However, I do think it is worth looking at them from a general point of view as similar arguments might come up in other cases.

Regarding number 1, police forces are using the figure of 1.5 metres clearance a lot in their work on the close passing issue, and it is particularly apparent on the mats that some forces are using to educate drivers. In fact, there is no specific legal requirement to leave 1.5 metres, but the highway code does include a picture showing how much space should be given:

From the width of the car in the photograph, which will typically be about 1.8m, it can be seen that the driver is probably leaving somewhat more than 1.5 metres clearance here. I believe this is the basis for the 1.5 metre recommendation, but I do feel it would be better in court to establish the expectation from this picture rather than quoting 1.5 metres directly.

Number 2 should be easy to dispense with but seems to be unwilling to go away. The law seems quite vague when it comes to dangerous and careless driving, but it does provide a clear counter to this argument. The section of law relevant to the charge of driving without out due care and attention is Section 3 of the Road Traffic Act, which states:

If a person drives a mechanically propelled vehicle on a road or other public place without due care and attention, or without reasonable consideration for other persons using the road or place, he is guilty of an offence.

It goes on to define due care and attention as follows:

A person is to be regarded as driving without due care and attention if (and only if) the way he drives falls below what would be expected of a competent and careful driver.

Note that there is no reference to whether or not the driving actually resulted in harm; it is purely about the standard of driving. Driving too close to a cyclist (or any vulnerable road user) brings an increased risk of causing injury or death, so that the “due care and attention” is applicable even if there was no collision.

Such driving is also inconsiderate, which the Act defines as follows:

A person is to be regarded as driving without reasonable consideration for other persons only if those persons are inconvenienced by his driving.

Driving like this prevents a great many people from exercising their right to use a bicycle as a mode of transport. Indeed, I myself have been afraid to take my granddaughter to school using the tagalong tow bar that we got when she became too big for her child seat. This is a great inconvenience to individuals who would like to cycle, and is inconvenient to the community as a whole.

I should point out that I do see a potential problem with my argument about inconvenience above. This definition could be interpreted to imply that a specific individual needs to be inconvenienced directly by the specific driving under consideration. I don’t know whether the interpretation has been tested in court.

Number 3 is, in my view, absurd, but it is easy to see why a defence might try to use it. It relies on the implication that if somebody doesn’t visibly react to something, then they must not have been affected by it. Again, the points I raised in relation to number 2 apply, in that the effect of the driving is irrelevant to the offence; it is the driving itself that is the issue. In my case, years of experience has trained me to remain cool despite the stress induced by such driving, although I can be heard to swear on the video.

In addition, analysing my previous videos has taught me that to swerve in a case like this is futile because the vehicle is past before my road position starts to move. The only cases where swerving has been effective were ones in which I could see a situation developing in advance. In a case like this one, of a close pass from behind by the driver of a vehicle travelling at speed, I consider the best course of action is to remain steady and continue on the path already planned. The fact that this can be achieved through training and experience does not mean that we are not affected by the incident.

Number 4 is an interesting one as I think it reveals a significant failure of logical thought. In this case, the defence wasn’t claiming that there was anything specific “forcing” the driver to come too close; only that there might have been. That is a very weak argument in itself, but even if a defence in a case were to claim something specific of this nature, it could well be interpreted as an admission that the driver had failed to perceive a hazard before starting an overtaking maneouvre, and was therefore not paying sufficient attention. Highway Code rule 167 provides the following guiance to drivers: “DO NOT overtake where you might come into conflict with other road users.”

This case has left me feeling encouraged that we are making progress in breaking the vicious circle of our poor road culture and previous failures of the legal system to deal with it. I have been quite pessimistic on that matter in the past, but in this case I am impressed with the police, the CPS (and their prosecutor, who was great), the legal advisor to the magistrates, and the magistrates themselves, who really cut through the chaff to focus on the core issues of the case. There is still a long way to go before we see real culture change, and this is just one case, but I am very optimistic that it could be achieved now.