Bolton to Radcliffe off road route

Almost 3 years ago, I posted an article about an off road cycle route from the centre of Bolton to the boundary with Bury at Bradley Fold using a newly created shared path. A couple of days ago I followed an extension of this route to get to the centre of Radcliffe; to the tram station to be precise. This is the whole route from Manchester Road in Bolton to Spring Lane in Radcliffe, opposite the tram station.

The route is 4.8 miles long, and would probably be just over 5 miles starting from Bolton town centre. I made the following (long) video of the route:

This video lasts just under 26 minutes, giving an average speed of just over 11 miles-per-hour. For a fairly leisurely ride like the ones I tend to take nowadays, that’s not bad, but for commuting it’s slow. This route doesn’t go near where I used to work, but for comparison I used to average about 15 miles-per-hour doing the 12.5 miles on main roads to work, including stops at many traffic lights. That doesn’t sound like a huge speed difference, but it represents an extra 18 minutes on my old journey to work. Of course, using a shared path like this would only be practical for about half of the year anyway, because the route is almost all unlit.

So I think the route is mainly useful for leisure, and for people who are happy to take longer to get there and are happy to do it only in daylight. Having said that, I had thought about taking my granddaughter on the route just for a gentle ride out; she is desperate to spend more time riding with me on the tag-along: 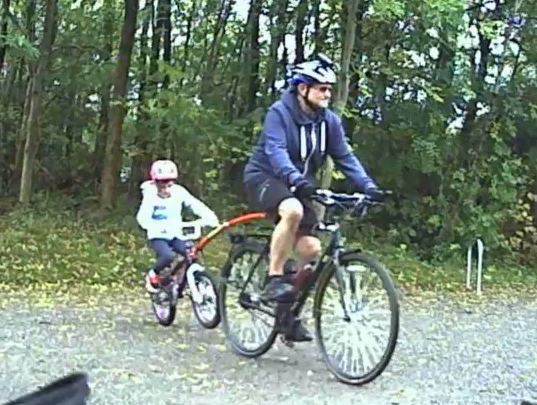 Unfortunately, that will be made more difficult due to obstacles like these on the route:

Yes, I could probably manage to get through these with some messing about and lifting, but it really is a pain in the proverbial, and would be impossible for a lot of people who are physically unable to dismount and lift.

At one point on the route (at about 4 miles on the map, or 20 minutes on the video) I realized I had missed the path, which is to the right of the road I was on: 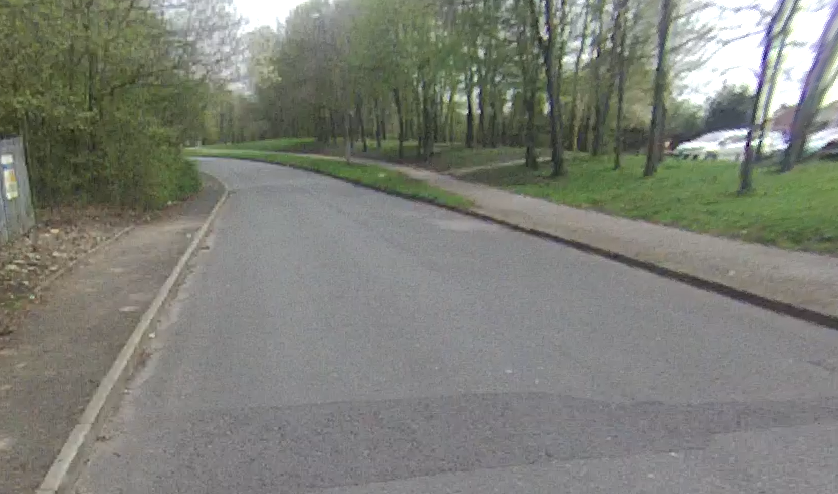 I did take the path on the return journey, but the surface is so rough that I would probably choose the road instead in future. In fact, although the surface is metalled along the whole route, it is quite rough in a lot of places and would definitely be more comfortable ridden on a mountain bike with suspension.

My overall verdict on this route is that it is sort of OK, but not really that useful for must people who have places to go and stuff to carry. If I were going to Radcliffe in daylight on a normal bicycle without much luggage, I might choose to use it because the alternative roads are very hostile to cyclists, but I might equally choose to go somewhere else instead.