I have been a very strong advocate for Greater Manchester Police Traffic Division’s Operation Considerate online video submission process ever since the original team in the Serious Collision Investigation Unit started it just over a year ago. Traffic PCSOs Stephanie Payne and Gareth Walker (now a warranted officer) showed that, as Bikeability trained cyclists themselves, they really understood what the expectations should be for cyclists themselves based on Bikeability principles and for people who drive motor vehicles around them; and the support from Inspector Paul Rowe was tremendous.

In August of last year, the original team was disbanded and the process was moved into the Traffic Division’s Central Ticket Office. This was a little disconcerting, but I felt it was appropriate as it seemed to indicate that the initiative was moving from a speculative development context into the mainstream activities of the Traffic Division. Under the new regime, some cases that I felt would have been taken forward by the original team have been rejected, but I have continued to express my support because it was, and continues to be, vastly superior to the situation that existed before the online submission was started. Despite my enthusiasm, though, I have to admit that I have had some reservations, feeling that, whilst things are far better than before, they are not as good as they could be.

The approach adopted by what is now known as West Midlands Police Road Harm Reduction Team provides a model for how police forces should be dealing with the problem of dangerous, careless and inconsiderate driving around vulnerable road users. Their emphasis is on evidence-based decision-making and a refusal to buy into the often ignorant opinions and popular prejudices of many road users. Their statement, made early in the campaign: “If poor driving makes people too scared to cycle, it’s a police matter”, captures the essence of their approach, and contrasts sharply with the attitude of some people, including some macho cyclists, who would claim that incidents like the ones shown below are trivial.

In April, I became more concerned during a discussion that ensued after I queried a decision that had been made in which this video submission was rejected.

In the response to my submission, the officer had said: “I know there are 2 lanes, but do think you could be criticised for riding in the centre of the road when there are no obstructions ahead”. Ignoring the hyperbole in the use of the phrase “centre of the road”, I replied with a copy of this diagram from the book Cyclecraft (the recommended text for the Bikeability training courses):

and stated: “I have attached a page from the book Cyclecraft, which is the recommended book for the Bikability courses. This shows almost exactly the situation at the junction I am approaching in the video, even down to the arrows on the road, and recommends riding in primary position, and even suggests moving further out to the right hand side of the lane.” In his reply to this, the officer revealed that he had not had any training in Bikeability and said that he was too busy to read about it at the moment.

Now, I wish to make very clear at this point that I intend no particular criticism of the officer concerned; he is making decisions based on the knowledge and understanding that he has at the time, and within that context, I actually think he’s not doing a bad job at all; the vast majority of the cases I’ve submitted have been taken forward. However, it is clear to me that training in Bikeability principles really ought to be a prerequisite for making decisions on such video submissions from cyclists, and it is a failure of management if staff are not provided with the time and the opportunity to learn about them.

In the same discussion, I pointed out that the overtake was very similar to the one that had resulted in a successful prosecution in February of this year. The response to this point was: “Re the previous case at Magistrates trial, that was dealt with by another officer. After they left I had some minor involvement, I saw in that video you call out the registrations of 2 other vehicles, but don’t think anything was done with those. If I had been making the decision for that video, again I think it would have been no further action; that is the problem, another officer may have a different opinion.”

Again (ignoring the irrelevant point about other vehicles) I can understand that argument given the context in which the officer appears to be working. Officers are, quite rightly, expected to exercise discretion in policing, otherwise it would be impossible to do the job, and that is going to result in some degree of subjectivity. However, discretion needs to be granted and exercised within the context of policies and guidelines, and those both seem to be lacking if a case that has been successfully prosecuted, convincing not only the officers involved but also the Crown Prosecution Service and the Magistrates, can subsequently be considered not worth pursuing by another officer with the same responsibility.

It seems I am not the only one to have concerns about some of the decisions made, as this Twitter thread indicates, as well as this tweet from Greater Manchester Cycling Campaign.

Despite all of these concerns, I have mostly been keeping quiet, “biting my tongue” because I really don’t want to sour the relationship with the police given the huge progress that has been made compared to the dire situation we had before. However, a case that unfolded yesterday makes me feel that perhaps something ought to be done to improve the process even more.

The following video shows a car being driven past me too close.

You can argue about whether you consider it to be too close, though the driver left less than half of the 1.5 metres clearance recommended by West Midlands Police and many other police forces; however, that is not the issue here. The issue is that the reply that notified me of the rejection of the submission read as follows:

“Sir, I can see both sides, you are in the middle of the road. On this occasion no further action will be taken. Kind regards.”

That could just as easily have been the response of drivers like the one shown in the video when they are challenged about their actions, and it frequently is. This response from the officer is particularly surprising given that, in my statement, I had provided chapter and verse on four of the reasons for my choice of road position:

“I passed through this complicated junction in primary position in the inside lane of a 2 lane carriageway. Conditions were dry with excellent visibility. I remained in primary position because the inside lane was too narrow to share, I was passing a side road, a pedestrian was waiting at the edge of the kerb to cross, and I was preparing to move out into the outside lane to turn right into Ashworth Lane. The driver of this car overtook me whilst straddling the two lanes, passing too close to my right hand side. From the video I can estimate that the side of the car was approximately 0.7 metres away from me and the speed of the car was 27 miles-per-hour.”

Now, these are all perfectly valid reasons for riding in primary position there, as any Bikeability qualified cycling instructor will tell you, but in any case even this is irrelevant. The highway code, in rule 163, instructs motorists when overtaking to: “give motorcyclists, cyclists and horse riders at least as much room as you would when overtaking a car”. It doesn’t say “as much clearance”; it says “as much room”, and there is a picture provided to drive home what this means:

Just to emphasise the point even further, I made a modified version of this picture, showing that it means overtake in such a way that you could fit a car into the same space: 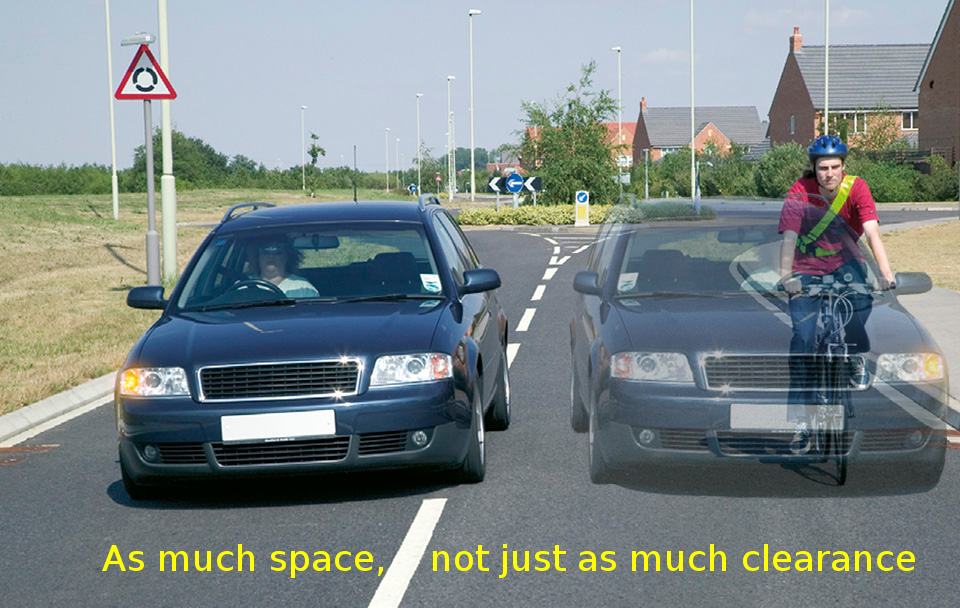 It is also pertinent to note that, based on the width of the car in the picture, it can be seen that the gap between the cyclists and the car is roughly 1.5 metres.

What the highway code doesn’t say is “… unless you disagree with their choice of road position, in which case you can drive as close as you like.” The driver’s opinion on the cyclist’s choice of road position has absolutely no bearing on whether their driving was careless or inconsiderate. Even if the driver’s opinion were correct, it would still not be a valid reason to pass closer to the cyclist than the recommended distance.

In summary, although Operation Considerate’s online submission process is a vast improvement on what existed before, it seems to me that some of the decisions being made within it may be being influenced by the same prejudices that many of the general public hold. These are prejudices that are sustained by the vicious circle that I described in this article and illustrated further in this article. The only way to break that vicious circle is to shift the norms and expectations of someone within the circle, such as the police, and that can only be done by defining clear policies and providing training to those officers who are making the decisions, starting with Bikeability training.