The strategy adopted by Chris Boardman’s team for planning the Beelines walking and cycling network places a lot of emphasis on quiet routes, and this is reflected in the methodology used, which is very well explained in Nick Hubble’s article about the Bury ‘Space-for-Cycling’ workshop. This emphasis is in part because they require the minimum of disruption and expense as they are located on roads and paths that are already fairly close to being safely usable by a 12 year-old on a bicycle. The ‘big ticket items’, now referred to as ‘Busy Beelines’, tend to be expensive and can involve considerable disruption to the status quo, so they are likely to be more difficult to achieve from a political perspective.

The theory is that where a quiet route meets a severance line, such as a major road, a crossing can be put in place to remove the barrier for people cycling and walking. Such roads are considered to be generally too unpleasant for walking and cycling anyway, so are relevant primarily as barriers to people taking quieter routes. However, not all barriers are roads (or even railways, which could be bridged if necessary). Bolton is an example (though not the only one) of a place where this could be a significant issue. I mentioned this in my article about the Bolton ‘Space-for-Cycling’ workshop. Bolton is built on a number of valleys, which can themselves be a barrier to getting from one area to another, but are rather more difficult to deal with if we avoid using the busy roads. So I thought I’d illustrate this point with an example.

One journey that I sometimes make by bicycle is the trip from my home to the doctor’s surgery, which is 0.9 miles away as the crow flies (or the eponymous bee in the term ‘bee-line‘). The following picture shows a map of the routes I can take. (Click the image for a larger version): 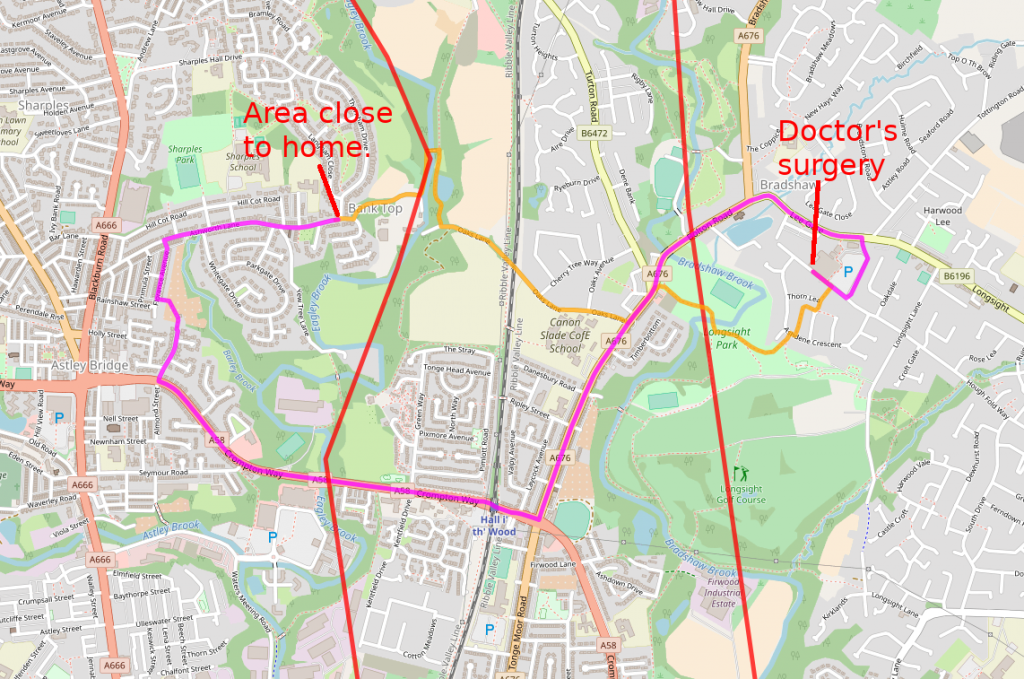 The route shown in orange is the shortest walking route, which is 1.6 miles long, although at most times of the year you’d have to wear Wellington boots to walk that route. In winter it is about 12 inches deep in mud in places and it does involve climbing up some quite steep, rocky embankments. Consequently, that route is impossible to cycle unless you are a world-class mountain biker. The shortest practical cycling route is shown by the magenta line, which covers a distance of 2.8 miles. It involves cycling along a ring road that has a 40 miles-per-hour speed limit, and an extremely busy main road that is fairly narrow in places.  I find it much easier to cycle that route since I started to use my safety flag, but it is still a route I would not want a youngster to ride. I would give you a distance for the shortest quiet route that I could use to make this journey on a bicycle, but there simply isn’t one, for reasons that will become apparent.

The two red lines on the map, passing roughly North-South, are severance lines formed by river valleys. Where the route I’ve shown in magenta crosses the leftmost river valley is a high level bridge that stands about 50 feet above the valley floor. That is not a particularly big climb if carried out over a long enough distance, though it would put some people off, but the problem is is more about the nature of the terrain.

As it happens, the Easternmost part of the walking route shown in orange, which passes through Longsight Park, is already marked on some maps as a cycle route, including Transport for Greater Manchester’s cycle map. 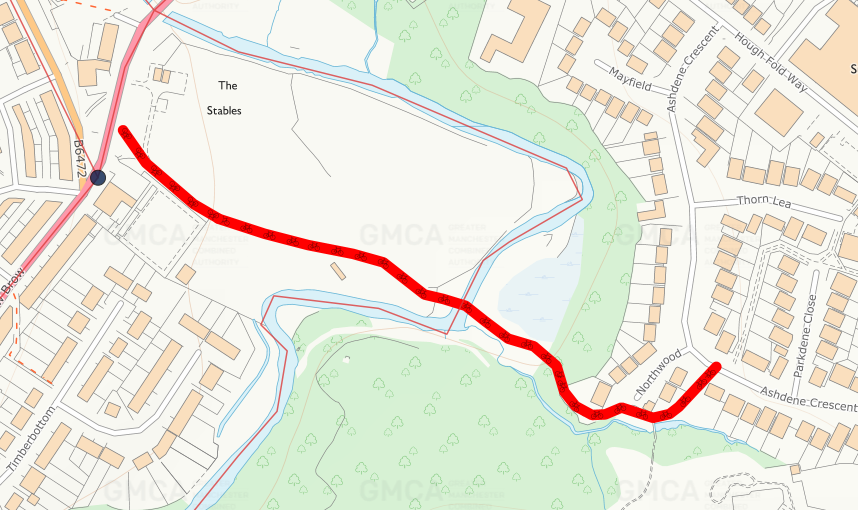 This route cuts right across one of the river valley severance lines I mentioned earlier. It doesn’t really address the problem of providing quiet routes because you have to go along some pretty hostile roads to get to and from the Western end of the short route, but it serves as an example of the problems of creating quiet routes in places with this kind of terrain. What could be better than a nice gentle route through a park; surely that ought to be included in the plans? Well, here is a video of me riding along it from East to West:

As routes through Bolton’s river valleys go, this is a relatively easy one, yet I don’t see that being turned into a Beeline without considerable expense, comparable to building a big ticket beeline on a main road. One reason the magenta route I showed earlier is so busy is that the section that runs North-East is one of only two routes available from the town centre into the Harwood area, which is a major residential area.

If we take a step back and look at the whole (or most) of the Bolton borough, we can see that this is a particular difficulty in coming up with quiet Beelines to link up the different areas: 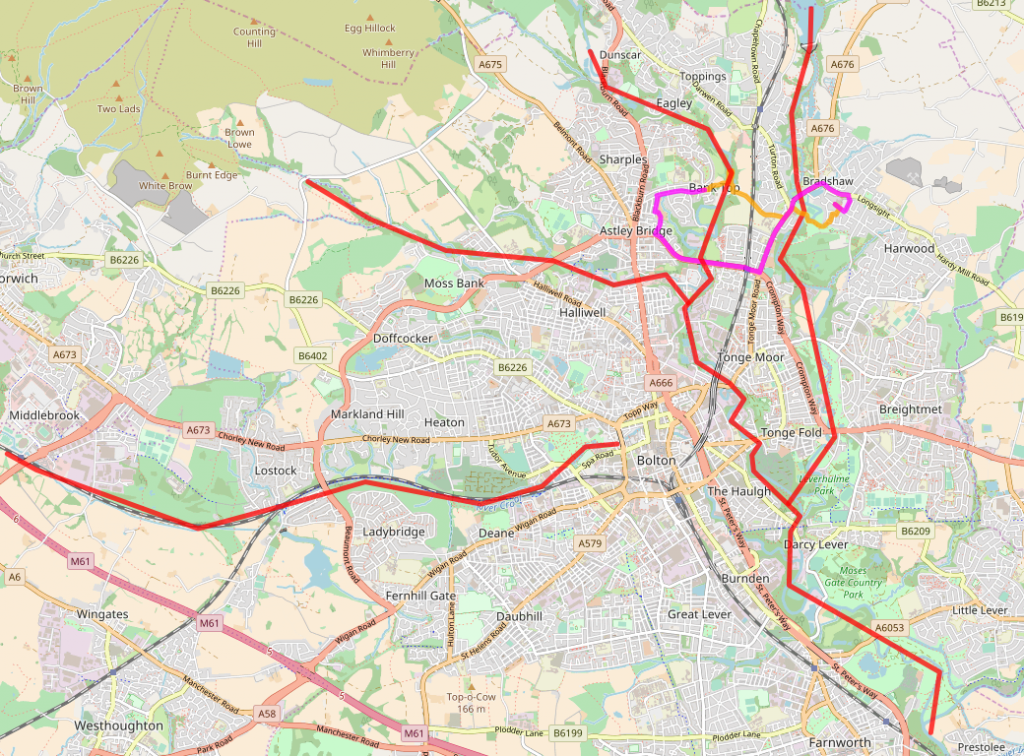 The red lines show the most significant severances formed by river valleys, with the bridge heights ranging from about 50 feet to 120 feet; the latter being the disused railway viaduct at Darcy Lever towards the South-East corner. (You can see the routes to my doctor’s surgery towards the North-East of the map.) All of these routes present the same problem as the one illustrated above; the terrain is as bad as the one in the video and often much worse. There are others, though they are mostly not as deep as the ones shown.

The planned North-South Busy Beeline along the A666 route will be a fantastic development, allowing people from the highly populated areas to the South and the North to travel to the town centre. However, I think if Beelines are really going to open up the town for walking and particularly cycling, we are going to need to have beelines on quite a few more of our (currently) busy roads just to get across these difficult geographical barriers.