Bolton highway department again shows us how not to design cycle infrastructure.

Posted on September 8, 2018 by MrHappyCyclist

Manchester Road in  Bolton used to be a section of my journey to work and back on which I had many bad experiences with careless and dangerous drivers, especially bus drivers. Much of the bad driving was exacerbated by the poor cycling facilities, which could have been deliberately designed to make things worse for cyclists. Another of the problems was the dreadful state of the road, which was rutted and potholed in places; indeed, in some places the Council had painted cycle lanes across broken tarmac, with the paint running down the holes in the road. In the past 2 years, it has had a lot of work done to it for various reasons and most of the remaining length was recently resurfaced, so the road itself is in very good condition now.

This article is to look at how the Council have dealt with provision for cycling on the newly resurfaced sections of road. After all, apart from the publicity and discussion generally on the importance of cycling in recent years, with Andy Burnham’s and Chris Boardman’s push to make the roads of Greater Manchester safe and comfortable for riding cycles, and the fact that this road is part of the proposed “Big Ticket” busy road Beeline for the Borough of Bolton, resurfacing work like this should be a golden opportunity to make the road cycle friendly.

Well, my granddaughter moved house recently so we now have to go along this road if I take her to school by bike as I did for her first day back on Tuesday. It was quite a relaxed experience as it happens, but only because of my big arsed safety flag. If it weren’t for that safety flag, I’d be taking her in the car every time because these brand new, so-called “cycle facilities” are frankly crap.

Here is a picture of the sort of thing they’ve done; in fact this part is about as good as it gets: Looks very smart, doesn’t it, but even with the addition of the green paint, this is precisely the kind of rubbish that I referred to in my previous article on bad cycle lanes. I haven’t measured it directly but from one of my photo overlay grids I reckon it is barely 1.3 metres wide:

This is classified as a busy road – indeed it is the main bus route from Bolton to Manchester – so even based on the current, very poor Government guidelines it should be 2 metres wide. In other parts it gets even narrower; here it is about 1.1m. and note that includes the space for the gutter and drain that you can see in the image: 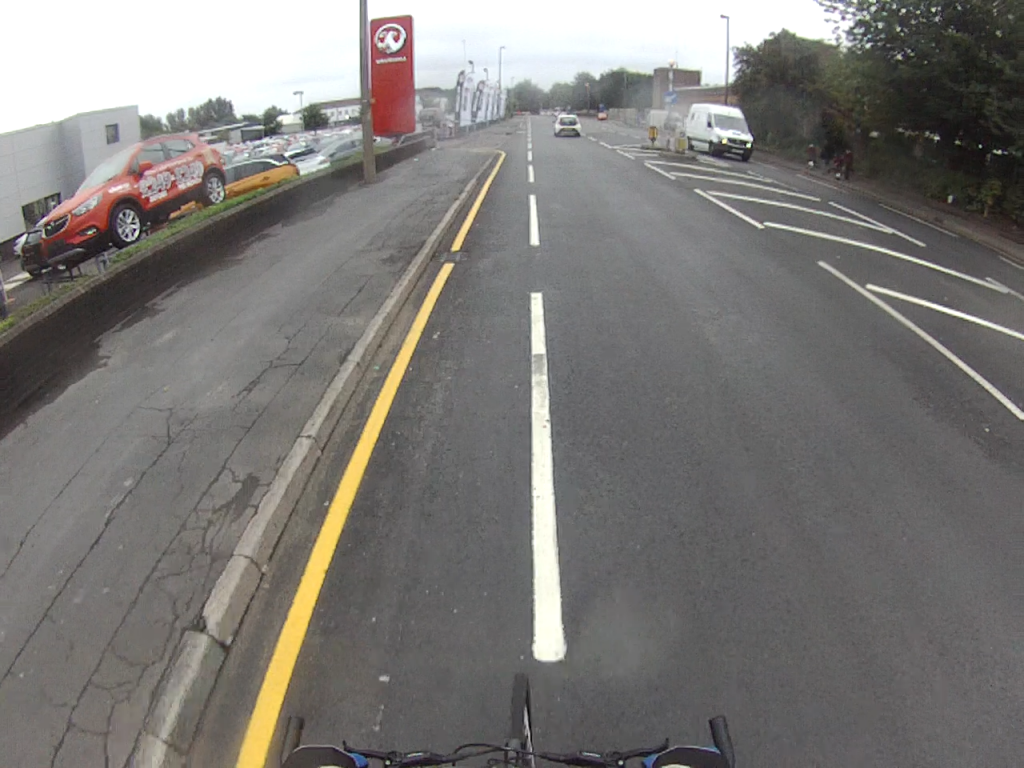 This narrow width means that you need to move out of the cycle lane at every side road, especially when there is a car approaching or waiting to exit. 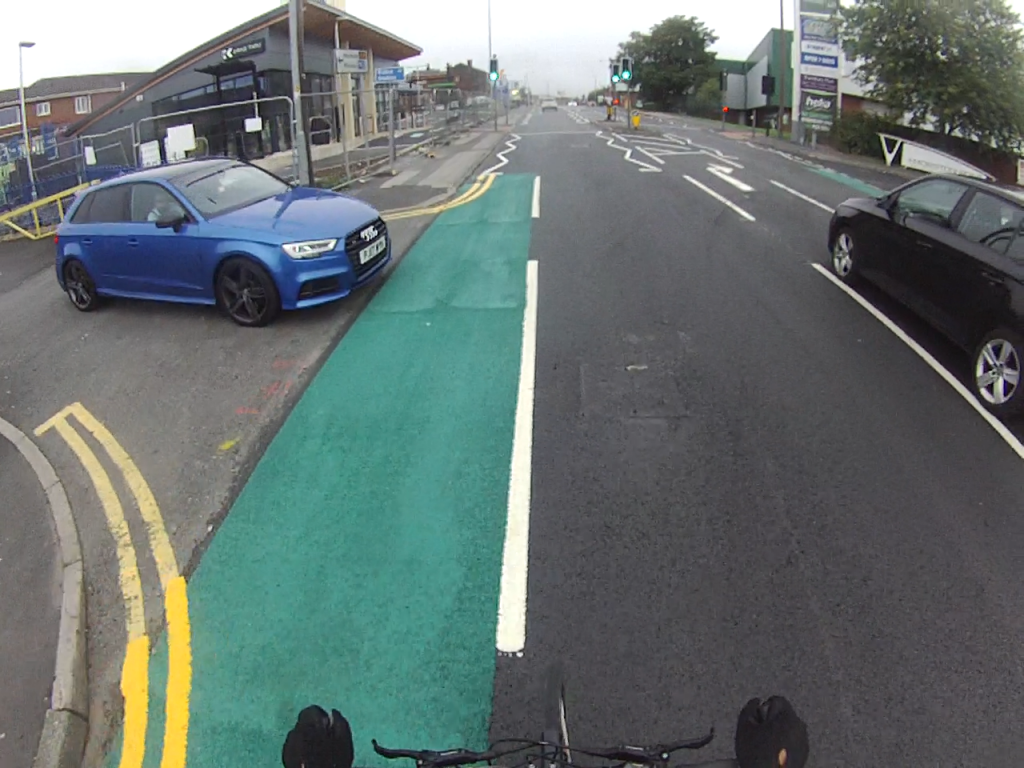 Again the big flag helps here, causing the driver behind to wait rather than pushing through the small gap between myself and the right turning car, but cyclists will often experience aggression from ignorant motorists who are angered at the audacity of a cyclist who refuses to use the wonderful cycle lanes that have been put in at great expense using “their [non-existent] road tax”.

Forcing us into this road position also creates plenty of opportunities for drivers to “left-hook” us as the lane goes past the wide flared entrances to side roads: See this video for an example of that. (look at the cyclist and silver car behind the bus in the distance.) That is someone else’s video of an incident that actually resulted in a collision, but I do have my own example from exactly this stretch of road some years ago:

And this recent one from from another bit of the newly painted road (but taken before the road was repainted):

A particularly bad example of this problem of narrow cycle lanes across side roads is at the junction with Weston Street: 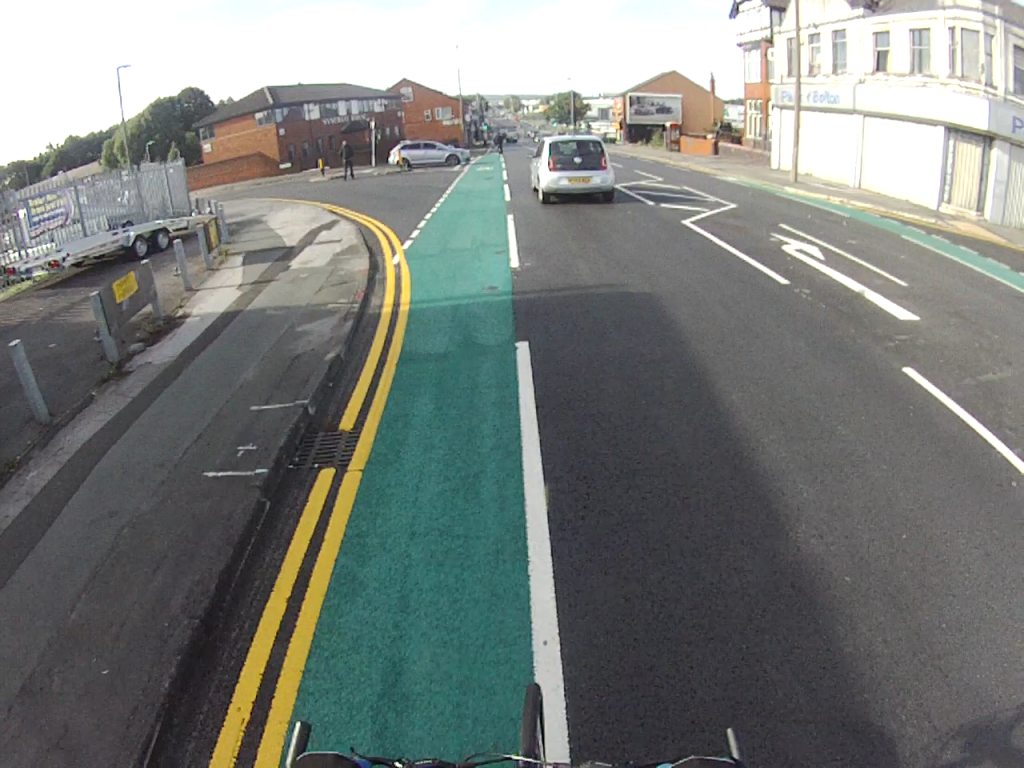 There is the danger of left hooks due to the wide, flared junction mouth, but there is an even worse situation here. The junction often has two lanes of traffic trying to get out on to Manchester Road, turning right and left respectively, including large vans and trucks. The drivers of left turning vehicles have their view severely restricted by the right turning vehicles, so it is very important at those times to ride far out in a strong primary position to increase the chances of being seen: As these two pictures illustrate, the cycle lane here is the very worst road position in which to approach the junction. I was riding with my granddaughter on the tagalong when these were taken.

The situation gets worse at some of the traffic light controlled junctions where Bolton’s highway designers here seem to have got into the habit of creating an utterly stupid arrangement all over the place: They even appear to have placed a big arrow on the road there to highlight exactly what the biggest problem is with this arrangement. Many drivers are careless and impatient, and are quite prepared to put other people’s safety at risk in their race to the traffic lights in precisely this situation. The big flag helps us here if I ride at the outer edge of the lane until we reach the junction but the irresponsible attitude of our Council in putting things like this in just beggars belief: Apart from the folly of designing these lanes at all, you can see from the picture above that there is easily enough space to make this cycle lane wider by a good metre, which would at least help mitigate some of the danger and unpleasantness. This example is slightly older, but is less than 2 years old and still part of the same awful road design. There are at least three junctions like this within a 1 mile section of this road. Note, by the way, that the driver of the black car here (registration number MF10GUC) drove across the advance stop line about 3.5 seconds after the traffic light changed to red; not that ASLs have any value at all other than as another opportunity for the council to tick a box.

If you don’t understand why lanes like this are a problem, this video, from another part of the same road will illustrate just one of the reasons:

That was before I started using the big safety flag, but councils putting in dangerous crap like this will never result in people switching from cars to cycles in significant numbers. Note also in that video another thing that Bolton council has a habit of doing: cycle lanes running through the door opening zone of parked cars.

Then, of course, there are the places where the cycle lane just disappears: Did they just run out of paint here, perhaps? To be fair, the disappearance of such a poor quality facility is no real loss, but I do wonder what logic is being applied here. I do wonder what the nervous cyclist is expected to do when they reach the approach to this junction: 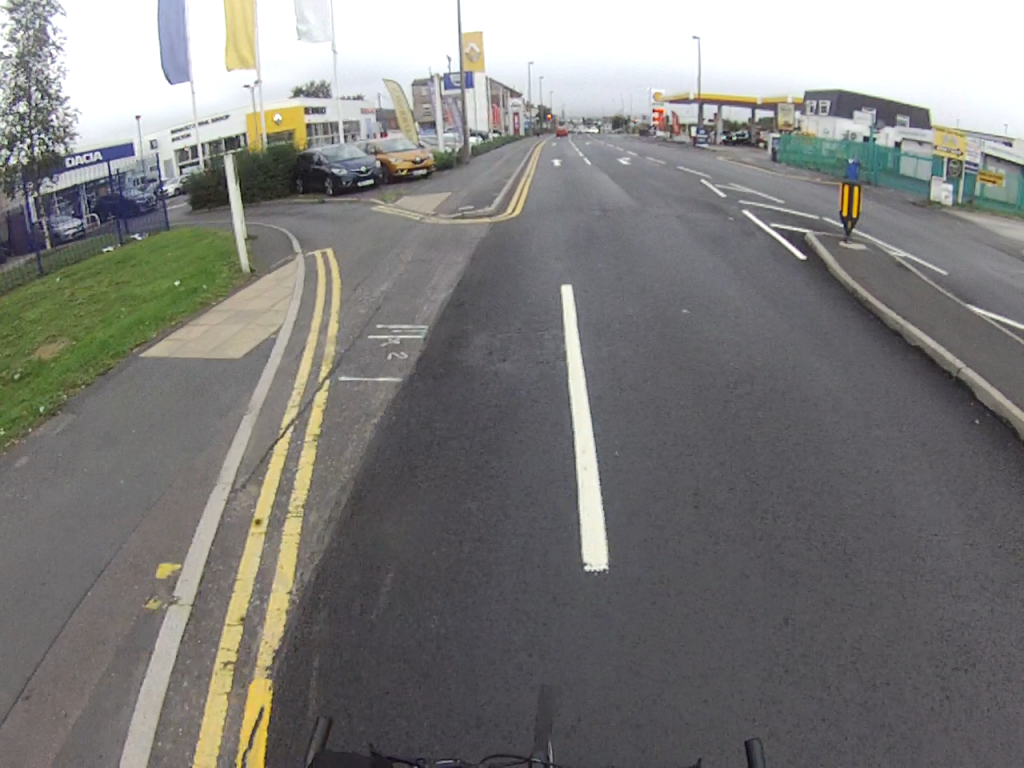 I do hope Chris Boardman’s team are reading this. Part of their plan in implementing the Beelines strategy is to provide education and training opportunities for the people working in the highways departments of the ten Greater Manchester boroughs on what to do and what not to do when designing for people on cycles. They clearly have their work cut out when it comes to Bolton.

7 Responses to Bolton highway department again shows us how not to design cycle infrastructure.