“You complain about me passing close, and then pass me even closer!”

This is a cry that I have heard a number of times from drivers who are unable to understand the difference between someone riding a small, lightweight, human powered machine, and someone driving a huge 1,200kg steel box propelled by over 100bhp of engine power. This article is to try to explain what the differences are and why they make the comment a rather silly one. Add to this the fact that the maximum speed of a cyclist is typically lower than the minimum normal cruising speed a car, and the comparison becomes even more silly. A bicycle filtering past cars will rarely be travelling at more than about 15mph, usually less, and the cars will be either stationary or travelling at less than 10mph. A car passing a cyclist will rarely be travelling at less than 30mph, and the cyclist themselves may be travelling at upwards of 20mph.

Of course, the most obvious difference here is that if a car clips a cyclist when passing, the chances are that the cyclist could be killed or seriously injured, whereas if a cyclist clips a car when passing, the car may have the paintwork scratched or the door mirror broken at worst. This alone ought to be enough to establish that there is no sense at all in comparing the two scenarios of a car passing a cyclist and a cyclist passing a car. A car can be repaired; a dead cyclist cannot be restored to life, and injuries can often be what the police referred to as “life-changing” when discussing a recent incident.

Next, we’ll look at the visibility issue. The following images show the view that the driver of a medium-size family car has when passing close to a cyclist. The camera has been mounted next to the position occupied by the right eye of the driver when he is in the driving seat of the car: 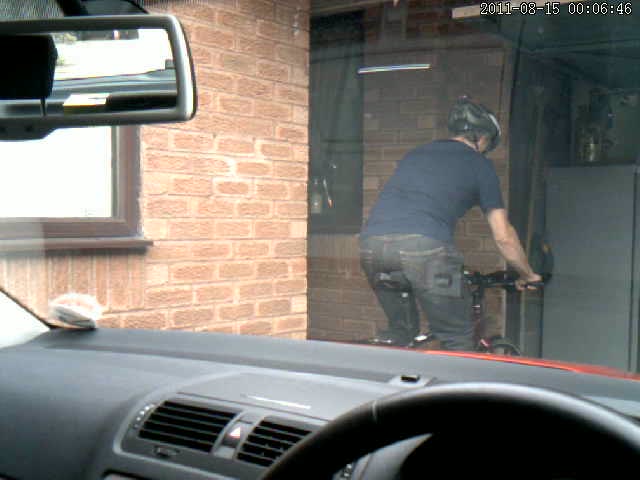 Surely, only the most arrogant of drivers could believe that they are able to estimate the width of their car accurately enough for the cyclist to be safe when they pass so close.
The following image, on the other hand, shows the view that a cyclist has when passing a car. In this case, the camera is mounted on the right hand side of a cycle helmet, just about level with the cyclists eyes: 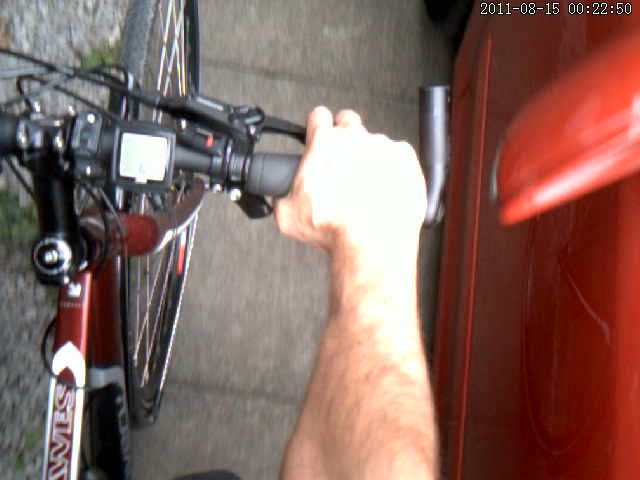 (In this case the cyclist is shown passing on the inside of the car, as they are allowed to do when filtering past a queue according to highway code rules 163 and 160.)
Notice that the cyclist is able directly to see precisely the distance between the end of the handlebar and the side of the car without any estimating required.

Of course, these are only static pictures; they do not even begin to convey the dynamically changing nature of the scenario, which brings us to the next point. The image below shows the cyclist’s view when the bicycle has just moved past the windscreen of the car: 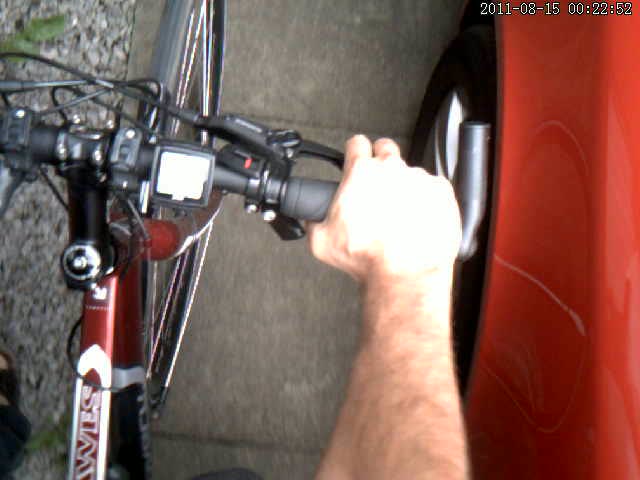 Notice the view that the cyclist has of the front wheel here. Unless this car is hit from the other side by an HGV, there is no chance that the stationary or slow-moving car will move suddenly to the side. Even if the car is moving, the cyclist will receive an early warning of any changes of direction because the front wheel will start to turn. This makes the movement of the car quite predictable from the point of view of the cyclist. In training programmes, cyclists learn to watch the wheels of motor vehicles in order to anticipate the vehicle’s movements. In addition, on a normal bicycle, the cyclist’s head is very high up compared to the car driver’s, so the cyclist can see any obstacle that the car may encounter; even ones of which the car driver may be unaware.
Contrast that with the image above showing the car driver’s view of a cyclist. In that case, the car driver has no idea of the kinds of obstacles that are in the path of the cyclist. There may be pot-holes, stones or bricks, oil, broken glass or any number of dangers that the cyclist may need to avoid. In addition, unlike a car, the bicycle is highly manoeuvrable and inherently unstable; a gust of wind can move the bicycle some distance to the side as the cyclist reacts to compensate for the changing dynamic forces. Even a puncture or a chain derailment could cause the bicycle to move suddenly to the side. Again, this means that, in order for the cyclist to remain safe, the car driver must leave a significantly large gap between the car and the cyclist when passing. This is reflected in the guidance given in rules 163, 212 and 213 of the Highway Code. Typically, the gap should be at least 2 metres from the elbow of the cyclist to the door mirror of the car, and this gap should never be less than 1.5 metres.

So please, courteous motorists, just because a cyclist passes you at a distance you feel is close, this is not an excuse to whiz past cyclists with only a tiny space between them and your door mirror. That, as my father used to say, is a completely different kettle of fish.