Bolton to press ahead with irrational town centre cycle ban.

Posted on January 10, 2019 by MrHappyCyclist

I have been feeling very positive after last night’s meeting of the Bolton Active Travel Forum. I was finally feeling we might be getting some way towards changing the culture of this motor-blighted town. Unfortunately it took less than 24 hours for my bubble to be burst when I looked to see whether anything had happened yet about the consultation on a proposed Public Spaces Protection Order that I responded to back in the summer, which included a proposal to ban cycling across all pedestrianized areas in the town centre. The result of my search was this report, which is to go to the Executive Cabinet Member for Environmental Services on Monday. The report is requesting that the member approve the proposed PSPO without any change regarding the cycle ban aspect.

The area concerned is shown in a map included in the proposal: 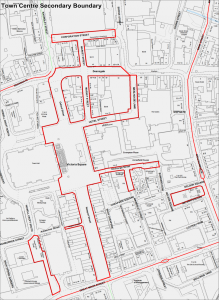 There are alternative routes around the central shopping area (pedestrianised area) that allow easy access and cyclists can dismount and walk through pedestrian areas.

This has clearly been written either by some battle hardened road cyclist or, more likely, by someone who never rides a cycle. Apart from the existing ban on Victoria Square, which is already a nonsense, there are a number of cut-throughs that I have used here to avoid the very nasty roads that form the only alternatives when I have been riding with my granddaughter on the tagalong bike.

For example, we have had various changes that have resulted in the only reasonably direct route left for me to take my granddaughter to school from our house by bicycle includes, for example, this road:

and all other routes are equally hostile. Needless to say, when we have our granddaughter to stay, we do “the school run” (9 miles round trip) in the car and will do so for the forseeable future.

“Evidence” for the ban

The PSPO is primarily concerned with various forms of alleged anti-social behaviour and when it went out for consultation last summer, it was accompanied by various bits of evidence regarding the different types of “anti-social” behaviour covered, mostly consisting of anecdotes. For the section on cycling, no evidence was provided whatsoever; it appeared to have been put in on a whim. Now that the results of the consultation have been reported, it is claimed that there is clear evidence to support the ban:

The report then quotes various specific points both for and against the ban, which can be found on page 11 of the report linked above but goes on to that that:

The consultation response clearly highlights this issue is a concern.

Well, let’s have a look at the quality of this evidence. A later appendix shows that there were actually just 34 people who claimed to have been “Affected by cycling / skateboarders / scooter users” (See p.34 of the document). Note that is across all three of these activities all put together; there is no specific figure given regarding cycling, which is a separate item from skateboards and scooters in the PSPO:

I wonder why that is. Could it be to hide the reality? It is telling that there are nine verbatim comments quoted against cycling in the detailed data, all containing opinion and/or anecdotes with no reference to real data. At the same time, there were 16 respondents who specifically stated that they felt cycling was OK in these areas.

Note, these figures are for a consultation across a borough with a population approaching 300,000 people. This is certainly not evidence in any scientific sense and it can hardly be called evidence at all!

It is not difficult to find real scientific evidence regarding the sharing of pedestrian spaces with cyclists, and the most relevant one I could find is this study conducted by the Transport Research Labs in 1993. This research was based on lengthy actual video footage of cyclists and pedestrians interacting in some of the busiest shared spaces in the country, augmented with similar evidence from various locations in other European countries with high rates of cycling. The video evidence was supplemented by interviews with cyclists and pedestrians (not questionnaire responses from a small number of self-selecting individuals who have been prompted by a leading question). You can read the paper for yourself, but the key point is this conclusion:

This is real scientific evidence that should have been considered when making a decision like this.

One of the statements mentioned in the “Consultation Methodology” (P.4 of the document linked above) was:

and the Commissioner (Chris Boardman) is quoted thus (on page 11):

The Greater Manchester Cycling and Walking Commissioner requested the council consider the option of shared space for both pedestrians and cyclists (especially on the route between Great Moor Street and Deansgate) explaining that this had been successfully implemented elsewhere.

The very next paragraph  in the report is this one:

As it happens, one of the proposed routes in the Bee Network actually passes along Newport Street in the area marked for the cycling ban, and I heard yesterday that Brian Deegan and his team of real experts on this matter at Transport for Greater Manchester have been working on possible schemes to allow for cycling through this area. Incidentally, concerns about this clash between the Bee Network plan (to which Bolton Council has signed up) and this PSPO have been raised in both the PSPO consultation, and in the comments on the version 1 Bee Network map; I know this because I made some of them myself in both contexts.

But what do these people know; they’re just experts, and Michael Gove has already pointed out that the public has had enough of experts.

It is interesting to note that, where skateboards and scooters are concerned, the order only states:

All persons are prohibited from, within the Prohibition Area, using a skateboard or Scooter in such a manner that causes, or is likely to cause, danger or damage, or give reasonable grounds for annoyance or nuisance to another person.

but where cycles are concerned, it states

All persons are prohibited from cycling / riding a bicycle within a specified part of the Prohibition Area (edged in red on Plan 1 and Plan 2). Emergency services are exempt.

Notice the difference: skateboarding and scootering are banned only if they are done in an anti-social manner, whilst cycling is to be treated as anti-social by definition. This is an example of prejudice against an out-group as has been discussed many times in relation to the irrational hatred of cyclists that exists in Little Britain.

This is reinforced in one of the statements about the feedback from that huge sample of people (remember, the 9 or more who “have been affected by cyclists”):

Respondents agreeing felt that cycling was dangerous in a pedestrianised zone, a number had experienced or seen near misses with pedestrians or felt that cyclists didn’t care about other users. Comments were also received around bikes being used by bag snatchers or being a particular danger to small children and people with mobility issues or disabilities.

It seems that people who simply use cycles for transport are to be held responsible for all manner of anti-social behaviour and criminal activity.

It is interesting that, despite the fact that the majority of “anti-social” activities covered by the order involve people who are on foot, there is no proposal to ban all people from walking in these areas.

Oh, and whilst we are on the subject of equitable treatment of sub-groups, did it not occur to the council that many people with disabilities find the bicycle a source of freedom, a mobility aid, and in some cases are not capable of “dismounting and walking the bike” for any distance. Equality Act?

What is there to say, really. Every time I have a reason to start feeling proud of the town I have lived in for over half a century, it (usually the council itself) quickly gives me a reason not to, and a reminder of just why I see such a huge number of empty shop units whenever I go into the town centre. It’s almost as though you don’t want to succeed, Bolton.