These two words show we’ve still a long way to go, but we need to get there fast.

One year on from the workshop we had in Bolton (as did all the cities and boroughs of Greater Manchester), Chris Boardman’s Made to Move walking and cycling strategy, and the most talked about element of that, the Bee Network, are a step forward that I hardly dared dream about three years ago. Bolton was very slow to get going compared to most of the other districts, but since I, with an associate from the Highways Department, started up Bolton Active Travel Forum, things are certainly moving forward here now.

However, there is one term I have heard a number of times recently, that reminds me we still have a very long way to go. That term is: “capacity neutral” … by which is meant “motor vehicle capacity neutral”. So a scheme is capacity neutral if it doesn’t reduce the capacity of a road or junction to carry a certain volume of motor traffic. 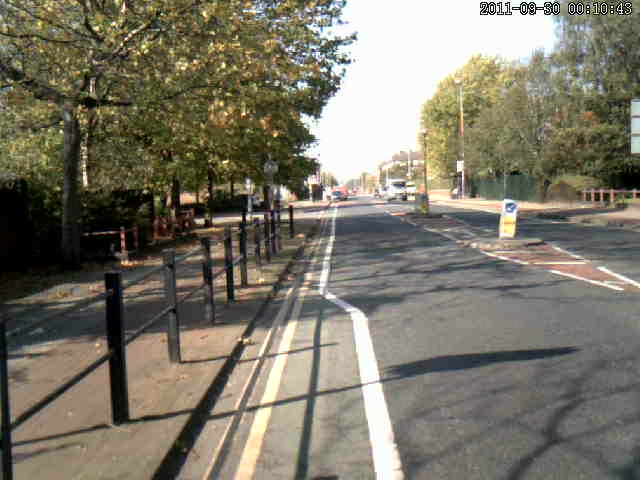 The picture here illustrates, through an (old) extreme example, the consequences of capacity neutral thinking. Of course, this example shows something that would never even come close to being accepted as part of the Bee Network. However, I did hear someone from TfGM use the term capacity neutral, with some pride, about one of the schemes in the first tranche to achieve entry to the Bee Network programme. At the local level, in Bolton, concerns about affecting motor vehicle flows through junctions have recently been given as the reason for cutting a currently very hostile (to pedestrians and cyclists) junction out of a scheme proposal that has gone forward, and advice to hold back on another scheme that involves taming a hostile road junction. The message seems to be coming across very clearly that a Bee Network is fine, but only as long as it doesn’t affect the motor vehicles.

Now, just to be clear, I do not intend to shoot the messenger here – the people I’m quoting are most definitely some of the good folk, and I think the use of this as a criterion for assessing schemes is more of a political expedient than a goal in its own right. Indeed, Brian Deegan implies as much in his Bee a Champion training course manual, where he points out that, whilst “[The Danes] are prepared to lose the efficiency of their signal-controlled junctions in order to create a smooth cycling experience, in the UK we have yet to reach that level of enlightenment”. However, I also think that as long as this term “capacity neutral” is in the highways vocabulary, at least with the meaning it currently seems to have, we will not have effected the culture change we really need to see.

Nearly five years ago, I wrote an article entitled: Let’s stop just treating (one of) the symptoms, in which I put forward the argument that we really are not, or should not be, campaigning just about enabling people to cycle, as the fact that roads are too hostile for most people to cycle on is just one symptom of a much bigger problem: the blight of the motor vehicle. You can read of the other symptoms, and how we are individually treating each one of those symptoms rather than the underlying cause, in the article. The real issue is how to claim back our public realm from the motor vehicle, and make it once again pleasant and fit for humans to inhabit. It just so happens that cycles are a big part of the solution. We need to be addressing the underlying cause of all these symptoms, and that is: far too many motor vehicles being used when they are not really necessary.

Part of the problem is that capacity is still measured by most Local Authorities, and the modelling tools they use, as capacity to carry vehicles. In fact, it is a bit more nuanced than that as tools will typically measure capacity and flows in “Passenger Car Units” (PCUs), whereby a car will be worth 1 PCU, a cyclist 0.2 PCUs, and a bus 2 PCUs (according to Transport for London’s Traffic Modelling Guidelines). This implies that roughly the same effect on overall traffic flow will result from the presence of 2 cars, 10 bicycles or 1 bus, and the design with “optimum” traffic flow will be regarded as the one that maximizes the number of PCUs per hour. This is a simplification, but sufficient for my argument here, and illustrates the relative efficiencies of the different modes. At roughly 1.5 person average occupancy (e.g. see European Environment Agency figures), therefore, 2 car PCUs is worth 3 persons, whilst 2 bicycle PCUs is worth 10 persons. Note that pedestrians don’t even seem to get a look in. Consequently, the optimisation would look very different if we were to measure capacity by people rather than PCUs.

Indeed, Chris Boardman’s Made to Move walking and cycling strategy report makes exactly this point: “Greater Manchester will be the first to start measuring how everyone uses highways and public spaces – counting people as well as vehicles”. What we need now is for our Local Authorities to take notice of that. Based on the above figures, re-allocating one lane of a multi-lane road from motor vehicles to cyclists will not reduce the capacity of that lane for moving people, it will increase the capacity by 233%. Unfortunately, these are rational arguments, and one thing I’ve found throughout my life is that rational arguments don’t seem to work in a political setting.

It is understandable that the Bee Network team and the highways department adopt the political expedient of going for capacity neutral schemes, at least until there are sufficient number of people cycling and walking instead of using cars that the benefits can be clearly seen. I can see that as a political strategy that can work, give enough time, even though it may mean reworking the schemes that were compromised in the name of capacity neutrality. However, we are officially in a climate emergency situation now, though the actions (or lack of it) from our government doesn’t seem to reflect that. This is not the time for plodding actions that will bear fruit in the fullness of time. The word EMERGENCY is a bit of a clue to that. Evidence is growing fast for the harm caused by poor air quality to every single organ in the human body and, like all towns and cities, we are subjecting Bolton’s children to this every day of the year.

Come on Greater Manchester, come on Bolton, we have to take action now to reduce the use of motor vehicles, not “in due course as part of a 10 year strategy”, NOW!

Addendum 23/05/2019: As if to hammer home the point about cycle infrastructure increasing capacity, this video was drawn to my attention today on Twitter:

Peak hour urban traffic does not have to be dismal.
It can be relaxing and smooth, even with high intensities.
As long as it is human-powered!

Just look at how many people (not PCUs) this junction in Utrecht is able to carry!