Posted on September 30, 2012 by MrHappyCyclist

I am pleased to be reporting here that the engineer concerned, whom I have now met in person at the Bolton Cycling Forum and who happens also to cycle himself, has been true to his word and the work has now been done. I think it is a vast improvement, though with some reservations. Using before and after pictures grabbed from my videos, I’ll start with the good part and then mention the reservations I still have.

The good news here is that the cycle lanes are now as much as twice the width they were in places. Here is a picture that is typical of the width changes that have been made: 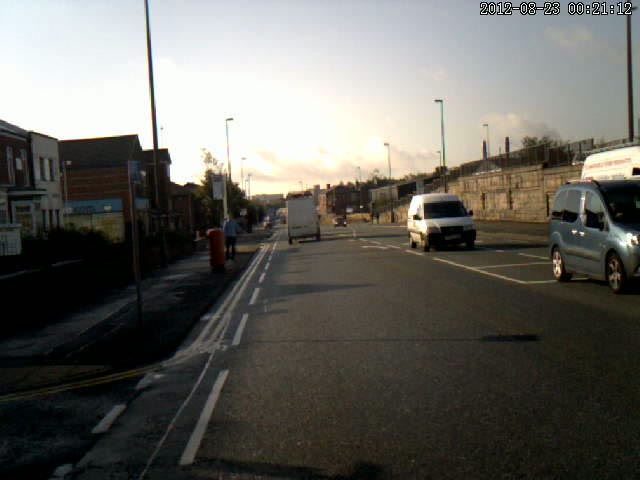 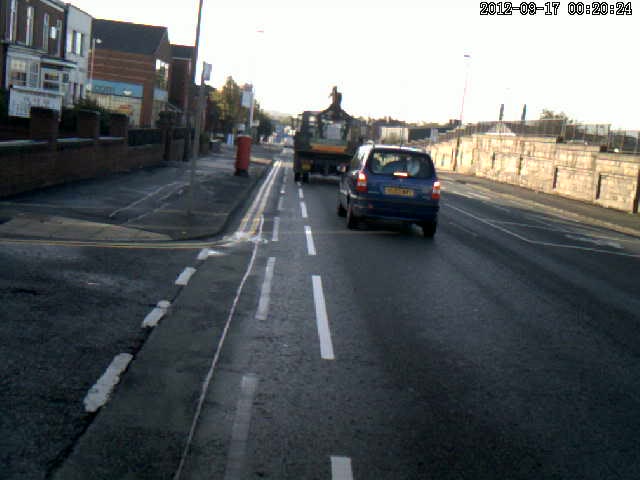 Despite my remaining reservations, this is a real improvement, and I am now using the cycle lane at this point whereas I didn’t before.

It feels really good, when I see other people cycling along here now, to know that this improvement is the result of something I did.

Narrowing Across a Side Road Corrected

When going past side roads, cyclists really should be keeping a good distance away from the edge, even moving to the centre of the lane in some cases. This makes the following design of cycle lane particularly bad as it forces cyclists into the worst position: 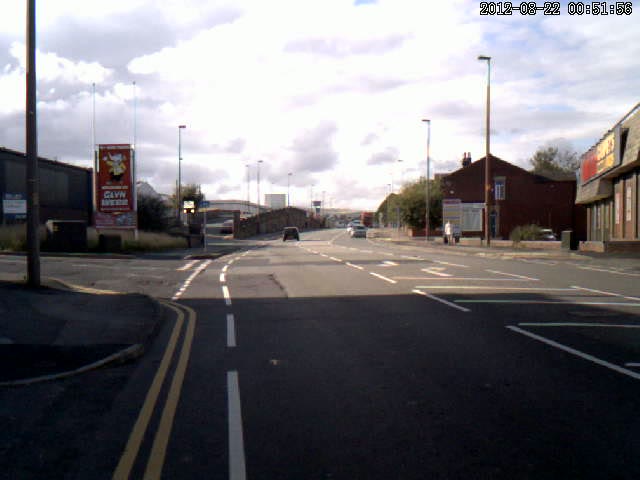 In this case, I was pleased to see the the design corrected: 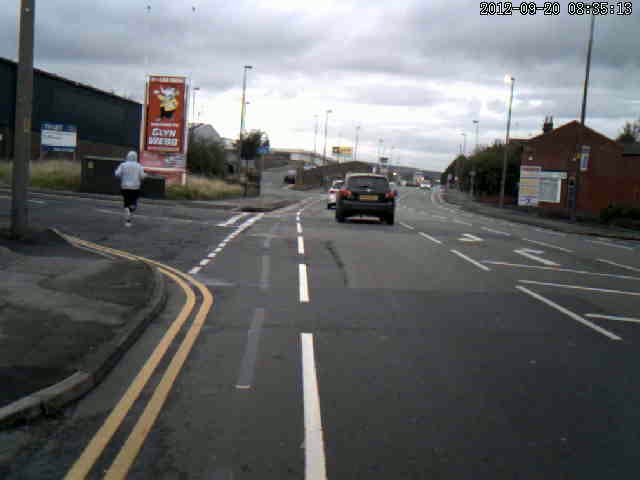 The line is now as straight as a die!

There is one particular downhill section on my (Northbound) return journey, where I would not use a cycle lane no matter how wide it is. This is the lane as it was: 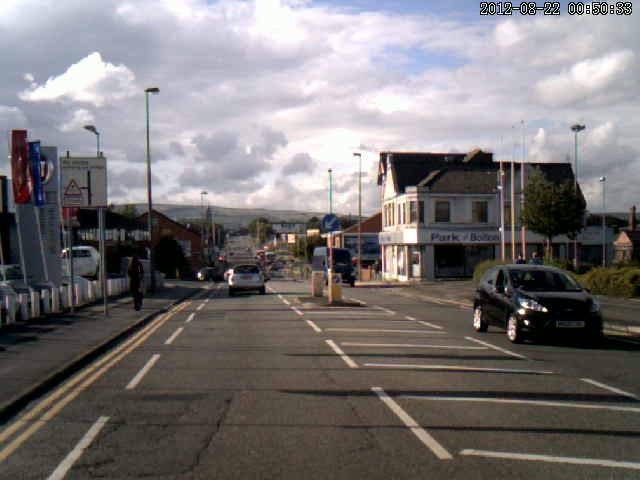 There were particularly good reasons for not using the cycle lane here. First, the road is in a terrible condition on the left hand side and, even when I cycle down the centre of the lane as shown here, I need space to weave around pot-holes and  wide cracks in the tarmac. In addition to this, there is a pedestrian refuge in the middle of the road, and I do not want motor vehicles, particularly trucks and buses, overtaking me through that gap. Immediately after the pedestrian refuge is a very busy side road exit on the left (Weston Street), which has two lanes of traffic emerging, which push out into the road, the right turning vehicles obscuring the view of drivers of the left turning vehicles. This is absolutely not a place to be riding over by the kerb.

The problem with this is that you often get aggressive behaviour from the drivers of following vehicles, even when you are keeping up with the traffic in front. They are undoubtedly arrogant gits, but knowing that doesn’t make it any less unpleasant. Part of the reason for this was that they think cyclists should be in the cycle lane, despite the stupidity of the design and the condition of the road. The good news, however, is that the cycle lane has now been removed completely: 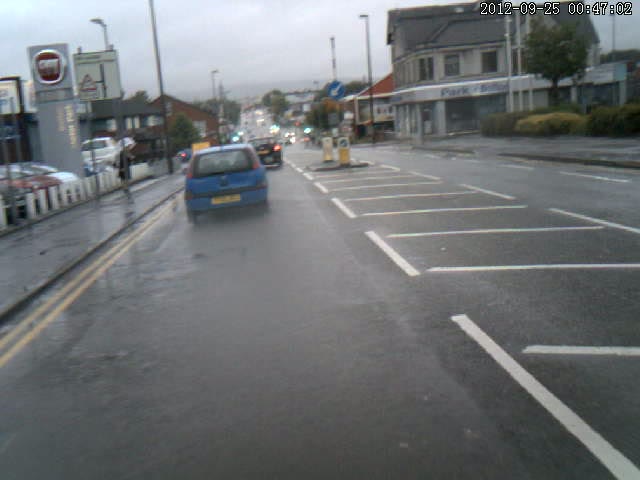 To some people, the removal of a cycle lane may seem like a backward step, but it is just so much easier cycling properly and safely down this road now that the silly cycle lane is gone. I have mentioned that it would be even better to see large cycle symbols painted in the centre of the lane here, but one step at a time.

I suspect this section may finish up longer than the good stuff above, unfortunately. This is because some explanation is needed of why I have the reservations that I have. I really don’t want to seem ungrateful because it is good that the Highway Authority is recognizing that they need to attend to the needs of cyclists and is taking actions to address it. However, I think we need to keep up the pressure. The truth is that these improvements are still just tinkering at the edges, making what was a dreadful joke of a facility into one that is just up to the usual poor standard that we have right across this country.

I know that a doubling of the cycle lane width is quite an achievement, but it really ought to be even wider than this. I measured the width of the lane adjacent to this post box shown here: It is 1.4 metres from the kerb to the outside of the white line. Now, the government guidelines state that cycle lanes should be at least 1.5 metres wide, and should even be 2.0 metres wide on busy roads and roads with higher than a 30 mph speed limit. This road, despite running parallel to a 50 mph bypass, is considered to be a major route into and out of the town, and can be very busy in the rush hour. However, I am prepared to live with it as it is for the time being; I would really like to see the road re-designated, but that is for a future article.

There are still places where the cycle width narrows, usually at critical points where maintaining the width is of the utmost importance. The seriousness of this cannot be overly stressed. I will look at two examples here. The first is where there is a side road emerging on the left side of a left hand bend: 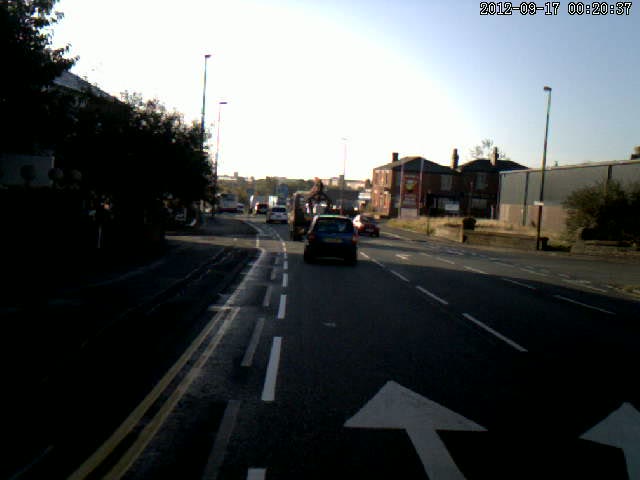 I have to say that this is very bad, and I move out of the new cycle lane here into the middle of the main lane. Many drivers find it difficult to maintain a line parallel to the kerb when driving around a left hand bend, so cyclists often tend to be squeezed into the kerb when the motorist cuts the bend. There is also a side road emerging on the apex of the bend, and motorists approaching the junction on the side road cannot see anything until late in their approach. They particularly wouldn’t be able to see a cyclist over on the left until very late, and the cyclist would not be able to see them approaching. Some motorists approach the junction too fast, and encroach into the cycle lane, causing any cyclist that is using it to have to swerve out into the traffic flow; a very dangerous situation. A real irony here is that the narrowing seems to be there to give motor traffic space to overtake cyclists when there is an oncoming vehicle waiting to turn right; this is precisely the situation in which motorists should not be trying to overtake a cyclist!

The other critical narrowing I want to look at is on the approach to an angled left turning onto Orlando Bridge on the Northbound carriageway. Here is a picture of how it was before the changes: 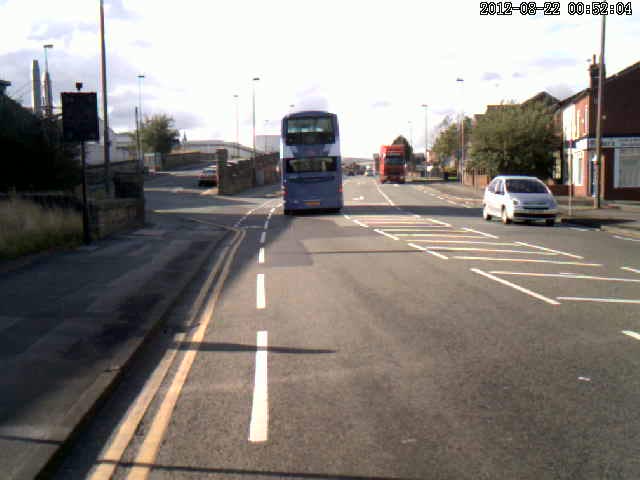 This is a really bad place to cycle past. The design of the road layout makes it possible for motorists to turn off the main road onto the bridge without even slowing down. Often drivers overtake a cyclist and cut across them at speed to make the turn, a manoeuvre that cyclists call a “left hook”. The way to discourage this is to cycle as far away from the kerb as possible, so that they have to slow down. Unfortunately, the carriageway narrows here due to a right turn lane for oncoming traffic, so a cyclist who is well out from the kerb tends to be cut up by drivers approaching from behind intending to carry straight on.

The correct solution here, in line with the DfT guidelines, is to maintain a full-width cycle lane at the expense of the main carriageway. This means that motorists cannot overtake a cyclist without driving into the cycle lane when there is oncoming traffic waiting to turn right, so they would have to slow down and wait. Unfortunately, the modified cycle lane looks like this (from slightly further away): 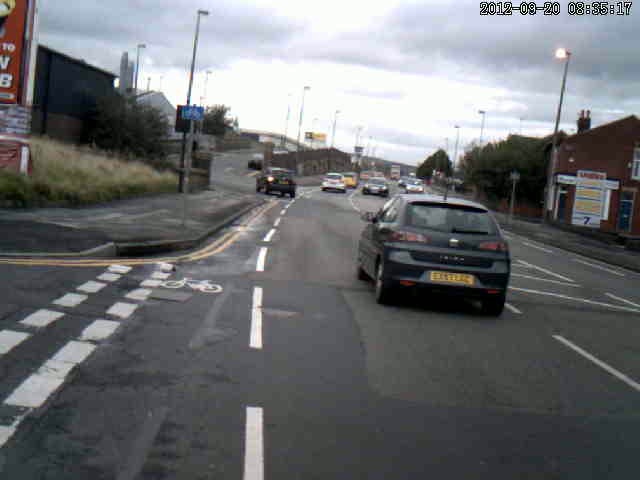 This is one place where I really would not be surprised to hear of a cyclist being killed or seriously injured; I just hope that it won’t be me. I have tried to come up with a safe way to cycle through this hazard, but have not been able to come up with a good strategy. The best compromise I have found is to stay out of the cycle lane on the approach to the turning to prevent left hooks, then move left just as I start to pass it to avoid being cut up, but this really is a compromise.

Here is a picture of the ASL feeder lane on the Southbound carriageway approaching the lights at ASDA:

The feeder lane is a continuation of the cycle lane that I showed earlier going past the post box. The only use for such a lane is to allow cyclists to filter to the advanced stop line at the traffic lights when there is a queue of stationary traffic. The DfT guidelines allow ASL feeder lanes to be as little as 1.3 metres wide; I suspect this is in recognition of the fact that they should only be used for cyclists to filter past stationary or slow moving motor vehicles. When there is no queue at the traffic lights, a cyclist should not be anywhere near this lane, but should stay in the centre of the main lane as I am doing here. In the days before I learned this, I was cut up several times by left-turning vehicles; precisely the reason for not using it. Unfortunately, motorists do not know the difference between an ASL feeder lane and a cycle lane, as they look almost the same (the width being the only difference), so I have had several instances of aggressive and even dangerous driving, particularly from van drivers, at this point. I think it would be better, on balance, if the feeder lane were removed altogether.