Why do you … ride in the middle over the M60 bridge

Posted on December 7, 2012 by MrHappyCyclist

Two lane carriageways often present a difficult problem for cyclists. If you ride near the kerb (secondary position) in the inside lane, many motorists will try to share that lane with you and pass too close, often not even moving the steering wheel at all. To prevent that, you need to move out to the middle of the inside lane (primary position) so that they have to turn their steering wheel to go around you. They are forced to encroach on the second lane anyway, so they might as well just move fully into that lane to overtake. After all, that is the whole point of having two lanes: slow moving vehicles use the inside lane and faster ones use the outside lane to overtake. Unfortunately, even if you do adopt the primary, you still get a few idiots straddling the two lanes and passing too close, often at high speeds, so it can be a difficult decision.

However, there are often other reasons for riding out in primary position in any case. One such place on my commute is where Manchester Road crosses over the M60. I ride the whole distance across the bridge in primary position. Here’s why.

The first picture shows the approach to the bridge, through the junction where the slip road goes off to the left to join the motorway. If you do not claim the lane here, you invariably get cut up by motorists moving into the left turn lane. Taking primary position here prevents that, and also gives the left turning vehicles space to get past. 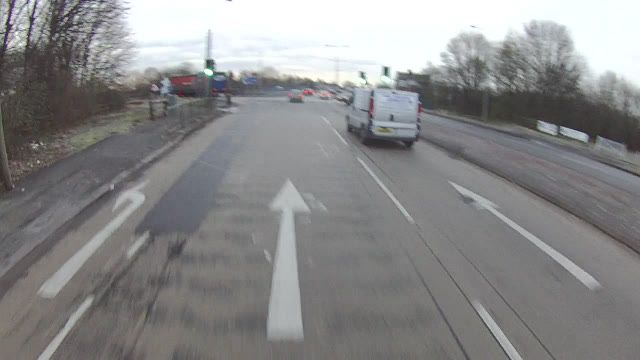 Once you are past that junction, there is a stretch leading up to the junction with the slip road that exits from the motorway. It is best to stay to the right of centre here, and I find this results in far fewer problems than staying in the centre or riding on the left. It also means that you don’t have to negotiate your way out into the traffic flow to pass the next obstacle … 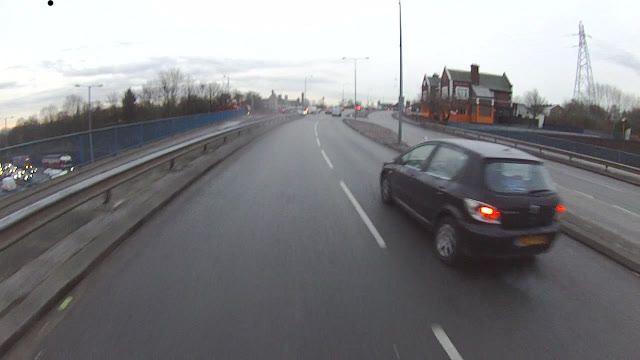 … which is the exit slip from the motorway. I absolutely do not trust the drivers of the vehicles leaving the motorway to drive safely, so it is best to stay wide so that a. they are more likely to see you, and b. there is space to react if they do pull out in front of you.

This is particularly important when you get to the place where left-turning traffic from the motorway emerges. Because of the arrangement here, cyclists can easily find themselves in the blind spot caused by the door pillar on a car (as shown here), or caused by the side of the cab on a lorry. Staying well out in the road means that you can be seen sooner than would otherwise be the case, and again will have time to react if the driver of the vehicle does not give way as they should. 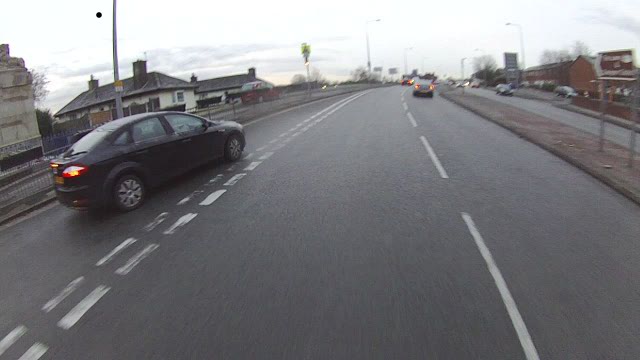 The last obstacle on this stretch is a classic side road with a flared entrance, allowing left turning vehicles to turn into the side road without losing speed. That is a very bad design that would not be tolerated in The Netherlands, for example, but then we aren’t in such a civilized country here. Before I learned to ride properly in a strong position, I lost count of the number of times I was cut up by left-turning vehicles coming from behind me at speed (“left hooks”). 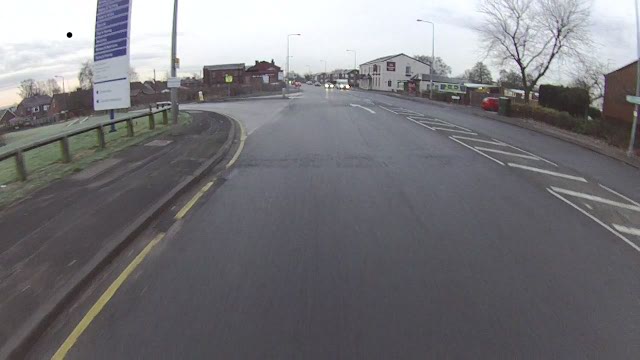 It takes a bit of courage at first to cycle in this way up here. It is up a hill, so you need to be able to maintain a good speed up there and, whilst most drivers are courteous and understanding, there are still some tossers who straddle the lanes and pass close (probably deliberately), or tailgate, sounding their horn. The next stage in my strategy may be to get one of these cycling tops:

This entry was posted in Article, Safe Cycling, Salford, Why do you...?. Bookmark the permalink.