Cycle Use as a System

I get quite frustrated by the arguments that seem to go on between different “groups” of cycling campaigners about which intervention is “the one” that is needed to bring about an increase in the number of people using cycles (bicycles, tricycles, etc.) as a means of transport.

In my view, the whole thing is a system and needs to be treated as such. So to try to get a handle on the degree of complexity and interconnectedness of all the important aspects, I have started to build a system model. (Note, I said this is a system model, not the system model.) This is a second draft: 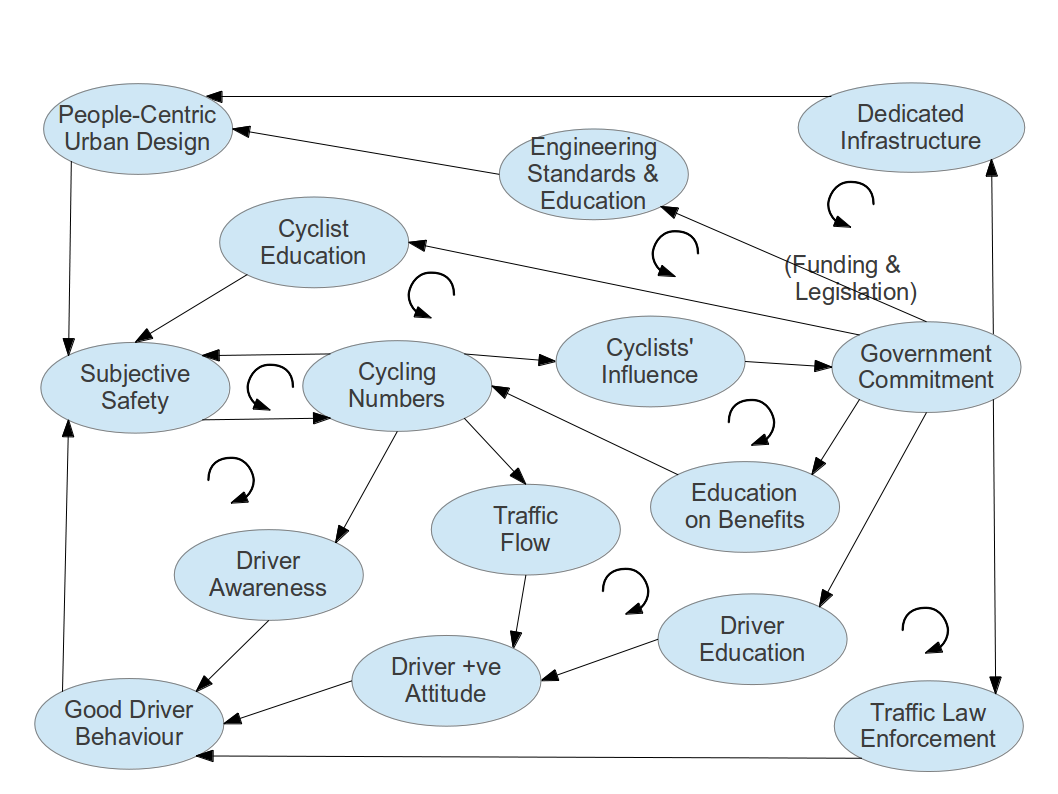 I think models like this are useful in many ways, and will hope to explore this in the weeks and months to come. For now, I just present it as something you may be interested in, and invite comment, without prejudice, regarding what you think.

Note that it is a model, which means that it does not include everything, and necessarily abstracts many features of reality. I am aware that the decisions over what to include and how to abstract reality are dependent on the purpose of the system/model, and I haven’t actually defined its purpose. However, I hope that these will evolve together to provide something useful.

The terms shown in the bubbles are defined below. These are my definitions for the terms as used in this model. I think they are reasonable; if you disagree, then let me know, but note that it is not a matter of who is right or wrong, but simply what are the most useful definitions for the purpose of this model.

– Indicates the presence of a reinforcing loop (“virtuous circle”). Positive change in any part of such a loop can result in an upward trend for all parts. However, this also can result in “chicken and egg” scenarios, such as the relationship suggested between cycling numbers and dedicated infrastructure.

People-centric Urban Design – design that is centred around amenity for people rather than motor vehicles. This includes separation of modes where appropriate, 20mph speed limits, restrictions on motor traffic, etc. I have separated this out from dedicated Infrastructure because I think it is a wider issue

Engineering Standards & Education – good highway design standards that pay attention to the needs of all user, could be created by reference to, e.g. Dutch and/or Danish standards and practices; education of highway engineers around the needs of non-motorized transport modes.

Subjective Safety – the feeling of being safe whilst cycling; that cycling does not seem like a dangerous activity.

Cycling Numbers – The number of people using bicycles to travel (by whatever measure is appropriate); could be proportion of miles travelled or proportion of journeys.

Cyclists’ Influence – The amount of influence that cycle users have over Government policy and attitude.

Driver Awareness – The extent to which drivers are aware of cyclists understand the needs of cyclists.

Driver +ve Attitude – The extent to which drivers view cyclists in a positive light and accept cyclists as legitimate road users.

Traffic Flow – This refers to the ease with which traffic is able to flow, representing the opposite of congestion.

Driver Education – Education of drivers about the needs of vulnerable road users, including education about how cyclists are expected to use the roads (road position, etc.)