The very common problem of tailgating.

Posted on December 24, 2013 by MrHappyCyclist

Tailgating by motorists is something that rightly annoys a great many cyclists, partly because, despite it’s being very dangerous, it is so common and often deliberate. Here are two examples from a single morning commute in May 2013:

Those were examples of drivers who deliberately drove far too close behind in an attempt to intimidate a cyclist, but there are also many more who seem to be ignorant of the appropriate space to leave. I think these bus drivers may come under that category, though I’m not absolutely sure they didn’t do it deliberately:

Now, there are those who might question whether these videos really show tailgating. After all, speed and distance can be misleading in these video clips. Well, let’s analyse a recent example. Here is the video clip:

Let’s do some data analysis on that particular piece of dangerous driving:

From the still frame showing the car tailgating, again using the dashed lane markings as a reference, the front of the car was about 3.5 metres from my rear wheel which, at 7.6 m/s means he was driving just 0.46 seconds behind me; he was certainly less than half a second behind me.

The Highway Code recommends drivers leave at least 2 seconds between the front of their vehicle and the rear of the vehicle in front. It also says that they should leave a gap at least equal to the minimum stopping distance which, at 20mph, is 12 metres (or two full dashes of the road markings here) on a dry road. On a wet road such as this, the distance should be doubled!

So this driver was tailgating me at 1/8th of the recommended distance for the speed and conditions on the road, and he was almost certainly doing it deliberately to threaten. According to the law, threatening someone in this manner constitutes common assault, and if the threat had involved any weapon other than a motor vehicle, would probably be treated as such.

Of course, this problem is not limited to drivers who are following cyclists – I often get tailgated in the car, especially as I keep to the speed limits and wait behind cyclists until it is safe to pass – but the consequences if something goes wrong are so much more serious when it is a cyclist who is being tailgated.

The following video shows an example of a driver tailgating on a roundabout in very wet weather:

This is a particularly dangerous thing to do because roundabouts often have slippery surfaces due to commercial vehicles spilling diesel as they travel round them. The following video shows a case where, fortunately, there wasn’t an idiot tailgating me:

That fall, which happened when the front wheel slid out from under me on the greasy road surface, resulted in a bruised elbow and shoulder, which healed within a couple of weeks. Had I come off like that in the previous video, I would probably have been killed by the driver of the red car behind, and he could well be serving a prison sentence for causing death by dangerous driving.

Of course, there are many people who say things like “but the cyclist was asking for it, blocking the road like that”. So those people are saying that, because a driver disagrees with the road position a cyclist takes up, it is appropriate to threaten his/her life using a tonne or more (13 tonnes in the case of a bus) of powerful, dangerous machinery. Even if the cyclist were deliberately trying to annoy the driver, threatening their life in this way doesn’t seem like the action of a normal, sane human being. But why not think for a moment about why the cyclist might be choosing to ride in this road position.

Cyclists who have been through the Bikeability national training scheme levels 1, 2 and 3 are taught to ride well away from the kerb at all times, and to take a position in the centre of the main traffic flow in places where there is insufficient space for a motor vehicle to overtake safely. This is illustrated by many sources, including British Cycling, another British Cycling page, the Institute of Advanced Motorists, the Automobile Association, and Transport for London, to mention just a few. Note also that this advice does not change just because some idiot in a Highway Department got someone to paint some lines in the gutter; painted gutters often make it more dangerous for those cyclists that use them.

So, if you are one of those drivers who deliberately tailgate cyclists as punishment for “getting in your way”, then perhaps you should take your arrogant little head out of your arse and realise that not everything is about you! 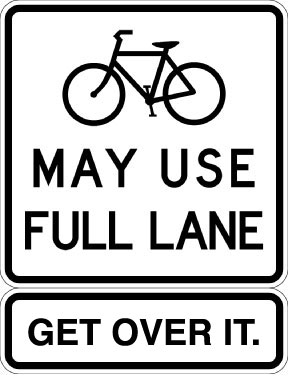