Is Britain showing symptoms of a third world country?

Posted on July 3, 2014 by MrHappyCyclist

When a cousin of  my wife visited a country in Africa many years ago, she stayed in a relatively wealthy household. One of the observations that she made was that people there with expensive televisions in their homes often didn’t even have decent sanitary facilities. It is easy to see why, of course: whilst it is easy for someone with money to purchase and install a television and video player, as long as there is power, it requires a coordinated, communal effort to build the infrastructure that is needed to provide decent sanitation. A research paper that looks at this issue contains the quote: “Toilets need to be as sexy as mobile phones and TVs so that people really want them in their homes. It is not unusual to find houses in Africa and Asia where people have high-tech gadgets but no toilet, so it’s not really about their ability to afford one.” Even when they have the financial resources, what people want is often completely disconnected from what they actually need.

Of course, much of this is driven by the concept of social status that exists in a capitalist society, whereby people’s position in life is measured by what they have rather than by what they contribute. It’s much easier to brag about your fancy technology that to show people the place where you go for a sh*t, and that seems to have by far the greatest influence when determining priorities.

The same effect seems to exist in British politics. The Rt Hon Patrick McLoughlin MP has today delivered a speech promoting the HS2 high speed train project in which the project is put forward as the thing that will bring greatness to the country in the eyes of the World. It even refers briefly to the British engineering heritage, mostly containing references to Victorian achievement and says: “We started to accept second best. We began to think that other countries did great design. The bullet train. The TGV.” There are some amusing ironies worth noting in this, such as the fact that one of the greatest achievements of Victorian engineering was something he never mentioned – the sewers that we are still using now, as well as the fact that his examples of Japanese and French engineering make HS2 into a “me-to” project rather than  a World-leading one, but let’s get back onto the point of this article …

… which is that we really need to address the basics before we start to throw £42.6 billion of tax-payers’ hard-earned money into huge vanity projects like HS2. To put this sum into perspective, back in August 2013, the Government published its cycling ambition statement, in which it crows about plans to spend £148 million over 3 years on cycling related developments for the whole country. That amount, which is just 0.35% of the cost of HS2, is less than 20% even of the VAT that is likely to be collected on bicycle purchases alone over the same period! It will hardly make a dent in correcting the problems that have been built into the road network by damaging motor-centric policies over the last 60 years, and will certainly not go any way towards making our towns and cities into pleasant places for people rather than cars. If British engineering is so great, Rt Hon Patrick McLoughlin MP, then why is it that we are now more than 40 years behind the Dutch in something as basic as allowing people to ride a simple bicycle to work?

Of course, the absurdity doesn’t only extend to cycling provision. We are not even able to maintain the dreadfully designed roads we have, with councils adopting a patch-and-mend approach year on year even for major roads: 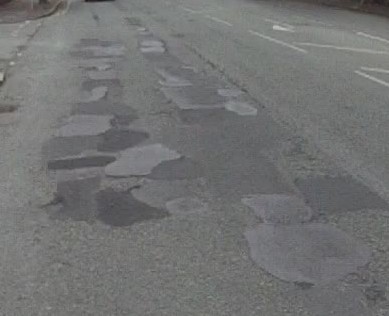 even assuming they fix them at all.

Come on Government, let’s get the most basic things sorted out before we pour money into vanity projects that are irrelevant to most people, and will do nothing to halt the destruction of our environment.