Why do you … ride in the middle from Higher Bridge Street to Bank Street, Bolton?

Posted on October 17, 2014 by MrHappyCyclist

This post is about a short length of my commuting route that involves going through three traffic light controlled junctions in succession and includes a short section of road that, due to its width, appears to be appropriate for lane sharing, but isn’t. I explain the reasons why in pictures, with explanatory words below each picture. 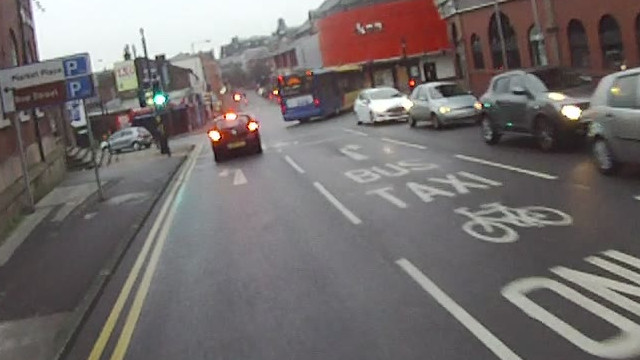 In the first picture, I am approaching the first traffic light controlled junction in the centre of the left turn lane, intending to turn left. There is a restricted right turn only lane to the right. The correct road position through any junction is primary position, even when making a left turn (See Cyclecraft, 4/e, page 103), and in any case, there is not room for a motor vehicle to overtake  a cyclist safely (i.e. according to Highway Code rule 163) without moving entirely into the restricted second lane. Unfortunately, on the corner itself, there is a metal drain cover in precisely the place where a cyclist should be, so road position is compromised somewhat here. However, it is important to recover the primary road position as soon as the metal cover is passed. 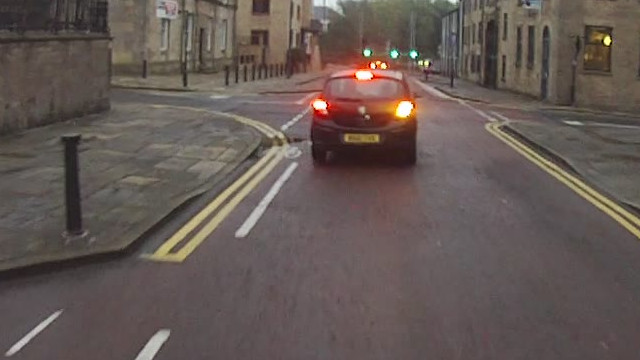 The previous left turn leads onto St George’s Street, which is a short section of one-way street, which is wide and has a narrow cycle lane painted on the left hand side. 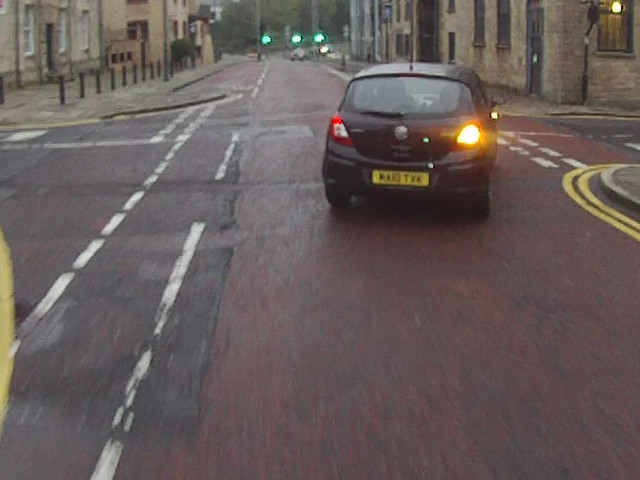 It is not appropriate, however, to use this silly cycle lane because, apart from all of the broken tarmac on that side of the road, a cyclist should anyway be getting into primary position in preparation for the next junction. 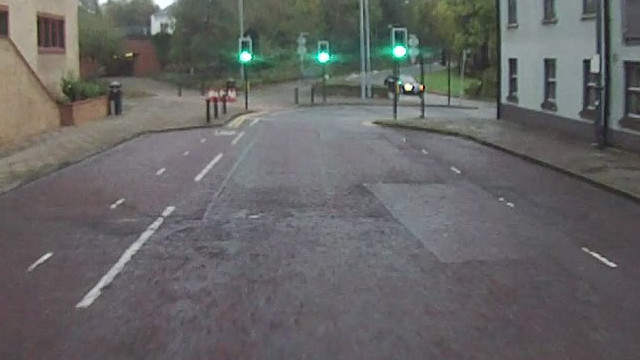 This junction is at a sharp right-angle turn in the road, with the slip road from St Peter’s Way (A666) joining just after the turn. Again, the left side of the road has a very bad surface, and anyway, the cyclist should be going through the junction in primary position. This road position is particularly important on this right turn because of the bad road surface, which means that a cyclist needs even more space than usual to navigate around obstacles. The cycle lane itself contains another metal drain cover, right on the bend, which is dangerous for any two-wheeled vehicle and should be avoided. The cycle lane then continues round the bend and proceeds between the two lanes, which are designated as right turn and straight on in the second lane, and left turn in the first lane. This is a particularly stupid arrangement because it places a cyclist between two potentially busy general traffic lanes and any cyclist using it runs the risk of being side-swiped by motor vehicles that are changing lanes. In any case, there is a third junction a very short distance beyond this point.

This third junction has an Advanced Stop Line (ASL), for which the cycle lane acts as a feeder lane. This arrangement is put in generally with the idea that, when the lights are on red, a cyclist can filter to the front and take a place in (the centre of) the bicycle box beyond the ASL. Unfortunately, this becomes a problem for a cyclist using the cycle lane when the lights are on green, as the cyclist has to move to the right from the cycle lane to get through the junction. Thus it can be quite dangerous to use the cycle lane at all here, and the correct position to take up is in the centre of the main traffic lane, joining the back of the queue if there is one. Apart from the general principle of passing through junctions in primary position, there is a specific reason why that is important through this junction. 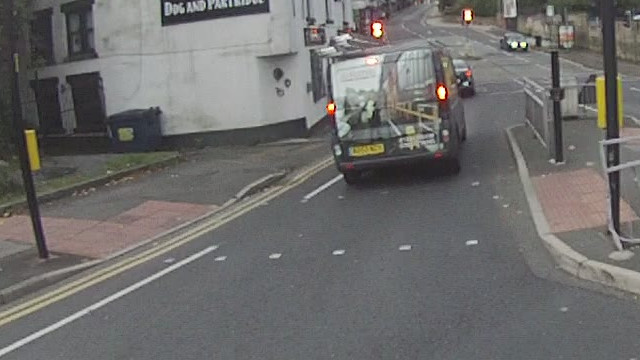 That is because of the geometry if the street on the other side (Manor Street), approaching Bank Street. The gap is not sufficiently wide for a cyclist and motor vehicle to share safely, despite the fact that some idiot painted lines in the gutter there. It is also important to maintain a strong road position beyond this gap and through a fourth set of traffic lights, which can be see in picture above. The road surface through there is extremely poor and the only path through that avoids the damage is far to the right, next to the centre line of the road.

This entry was posted in Article, Bolton, Safe Cycling, Why do you...?. Bookmark the permalink.