Posted on October 17, 2014 by MrHappyCyclist

Last week, I had occasion to report two different instances of aggressive driving – road rage, in fact. The two incidents are shown in the following videos (I will refer to them by the registration numbers of the vehicles involved):

Now, people who have seen these video have generally been quite shocked, particularly by EK54SVX, which involves the driver tailgating me extremely closely whilst continuously blasting the horn. Even as someone who has become fairly hardened over time to incidents like these, I have to admit that I was pretty damned scared by that one.

I reported both of these to the police a week ago via the 101 phone number, and went to the police station on Sunday to give statements and deliver the video evidence on CD-ROM. To say I am disappointed with their response would be something of an understatement; I am frankly disgusted with Greater Manchester Police regarding their handling of this matter, and more than a little angry, I have to admit. In summary, the police basically don’t care about this kind of thing happening on the roads – there is no other conclusion I can come to – and I’ll list the key reasons for that below.

When I was at the police station reporting the incidents, one of the first questions they asked me was why I was taking up the road position that I did. Now, I can imagine that this is information that they might want, because they may be asked it themselves, but I think it telling that they pretty much started off with this. We unfortunately got into a bit of an argument over that, and I was left feeling that perhaps I had caused that myself, but on reflection I don’t think that is the case. When the officer asked me that question, I responded that I would answer it in detail, but first should stress that part of the answer is that it is not really relevant to the main issue. They did seem rather too eager to argue with that point, and I believe that was the cause of the disagreement. I mention this primarily because it is relevant to the picture that builds up as we move further through the ensuing process. Anyway, I did give very detailed information about the choice of road position, taking care to refer everything back to the guidance provided under the Bikeability Levels 2 & 3 training scheme, and the book Cyclecraft. I won’t reproduce my answers in detail here, but you can read the reasons in this new blog article (in relation to MK05AWC) and this old blog article (in relation to EK54SVX). It was clear when I was giving these explanations that the officers were completely unaware of good cycling practices and were surprised to hear me say that cyclists should be riding in the centre of the traffic flow under many circumstances.

Last night, I received a call from the officer dealing with the cases, who told me that they had decided, in both cases, just to have a quiet word with the driver, and that was that. Needless to say, I found that extremely disappointing, and I told her so. In the discussion that followed, there were certain things that stuck in my mind, which I will mention here.

Regarding MK05AWC, the officer stated that: “just as [I] had a right to use the full lane in the road, the driver also has a right to ask me to use the cycle lane”. This is just weird, so I replied that the driver didn’t “ask me” anything, he tailgated whilst blasting his horn and screaming at me through the window. The officer’s response indicated that she saw nothing wrong with this driver’s behaviour.

Regarding EK54SVX, the officer stated that she had shown the video to several other officers (unspecified) and they all felt that, whilst the driving was a little below par, it certainly did not constitute an offence, and even that Section 59 of the Police Reform Act is not applicable.

Again regarding EK54SVX, the officer also stated that she felt I was riding in a dangerous manner because I stopped. OK. have a look again at the video. At 0:31, the driver is following approximately 1m behind me. At 0:32, I decided to slow gradually to a stop, which then takes me about 3 seconds until 0:35. This is the safest action I could take in these circumstances as it is extremely dangerous to continue riding at around 15mph with an idiot driving a car less than a metre behind. One could be forgiven for thinking that there seems to be a pattern that appears quite often in these cases, in which the police officer attempts to frighten the complainant into going away by manufacturing some, often absurd, counter allegation. 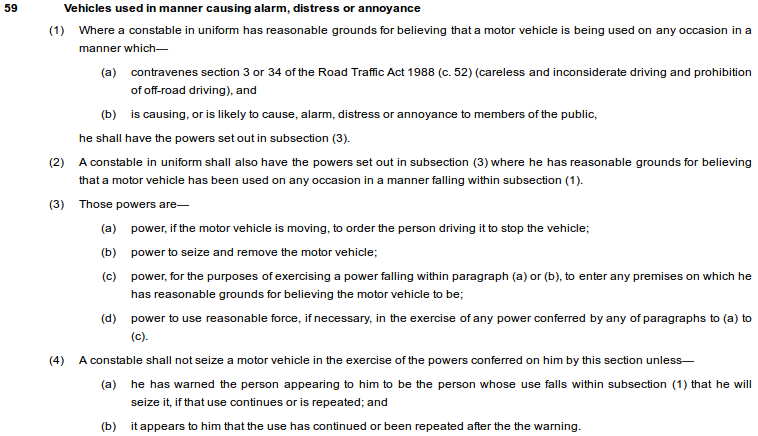 Well, I can tell you categorically that in both the incidents above, the motorist was causing distress and annoyance to this member of the public, and in the case of EK54SVX it was bloody terrifying. To be honest, I’m quite impressed with myself for managing in the circumstances to keep a cool head and bring the incident to a stop. So, it would seem that PRA Section 59 could have been designed for precisely these situations.

This morning, I made a complaint to the 101 service about the way the incidents have been handled by the police, and very quickly received a call from an inspector. The inspector seemed at first to be quite helpful, recognising my concern that there was some urgency in dealing with the matter as a significant amount of the 14 days allowed for serving a Notice of Intention to Prosecute on the drivers had now passed.

The inspector again asked me to explain about my road position. As I rehearsed the explanation yet again, alarm bells began to ring for me when the Inspector expressed great surprise at the notion that the correct road position to adopt when keeping up with traffic, as well as when passing through a junction, is the primary position, in the centre of the traffic flow. Given that this can be confirmed by referring to the Bikeability Delivery Guide, downloaded from the Department For Transport’s own web site, I find this level of ignorance in a police inspector to be alarming to say the least. Some relevant texts from that guide may be found on:

At this point, the Inspector had not yet viewed the video, but he stated that, should he decide to serve a Notice of Intention to Prosecute on the driver, he would serve one on me as well. I tried to give him the benefit of the doubt on this, but it does seem to fit the pattern that I mentioned earlier. Surely this senior officer could not be attempting to cook up something to encourage me to drop the whole thing? I have to assume he was not, and in any case this prospect does not worry me as I would be able to bring more than enough evidence and expert testimony to to knock it on the head; assuming of course that the British justice system can be trusted – hm, on reflection I’m not so sure.

Well, given the way things had gone up to now, I did not find it in the least surprising that, when the Inspector rang me again after speaking with the officer dealing with the case and viewing the video, he confirmed that he did not see any reason to proceed in any way other than having a word with the drivers and warning them that they shouldn’t behave in that way. In his attempt to justify this, he even denied that the driver of MK05AWC was revving his engine,  even though that can be heard clearly at 1:15 in the video above, and is even clearer in the raw rear view video,  which they have. When I challenged their decision further, he actually said that he was not prepared to proceed because my “choice of road position was questionable”. When I again quoted the guidance given in the Government’s Bikeability training scheme, his response indicated that he thought that was just my opinion, and a driver’s holding a different opinion is equally valid.

I was rather stunned by this response from a police inspector, so I’m afraid I gave up at this point and said I would just bring the full details of the case the people in the Traffic Unit, who have already asked me to keep them posted on the outcome of the EK54SVX case. In fact, the reason for writing this blog article is to do just that – in great detail – so I hope I haven’t given you too much to read chaps.

I have to say that whenever I have cause to discuss matters like this with police officers other than those in the traffic unit, I always feel a very strong sense of cognitive dissonance – the same kind of feelings I get when reading or watching a play by Franz Kaftka or other examples from the theatre of the absurd. It is as though I have arrived on a different planet; or perhaps it is just that I have travelled backwards through time to the culture of the 1970s. Life on Earth, anyone?