Posted on October 25, 2014 by MrHappyCyclist

A week days ago, I posted an article about the Greater Manchester Police Force’s refusal to deal with driving that is deliberately dangerous or intimidating. It happens that I was also, whilst writing that, reporting another incident in which a driver tailgated me extremely closely and then overtook dangerously close, even though there was an empty traffic lane available to his right. I am 99% certain that this was a deliberate attempt to bully and intimidate a vulnerable road user by acting in a very dangerous and irresponsible manner. This is the incident in question:

I will go into some analysis of this video evidence later, after I have described by experience with the Police.

I reported the incident on Friday and, after I explained that I wouldn’t be able to get to a police station in Salford for some time, they arranged for me to meet an officer at a Bolton police station the following Sunday. It seemed that this meeting in Bolton was pointless because all they did was to bounce me back to Salford, saying that they would refer it back and an officer would contact me to make an appointment to visit Pendleton police station in Salford. This was after they had viewed the video evidence on my mobile phone and told me that they didn’t think there was anything in the video worthy of pursuing. In fact, it turned out that the meeting in Bolton was far worse than useless because the officer in Bolton called me later on Sunday to tell me that the Salford police had said that they would not be pursuing the matter, even though they have not seen the video evidence! This was apparently based on information the Bolton officer had given them.

This experience prompted me, prior to escalating the matter through the complaints procedure,  to carry out a more in-depth analysis of the video evidence and, in the process, to carry out some calibration work on the cameras, which I have intended to do for some time. I will write about the calibration in more detail in another article, but it involves using the size of a number plate in the rear view image to calculate the distance of a vehicle travelling behind, which turns out to be very accurate. I also used the lane markings to calculate my speed, based on the dimensions specified in the Government’s Traffic Signs Regulations and General Directions.

The image shown below indicates the distance that the driver of the car was travelling behind me just before he overtook: 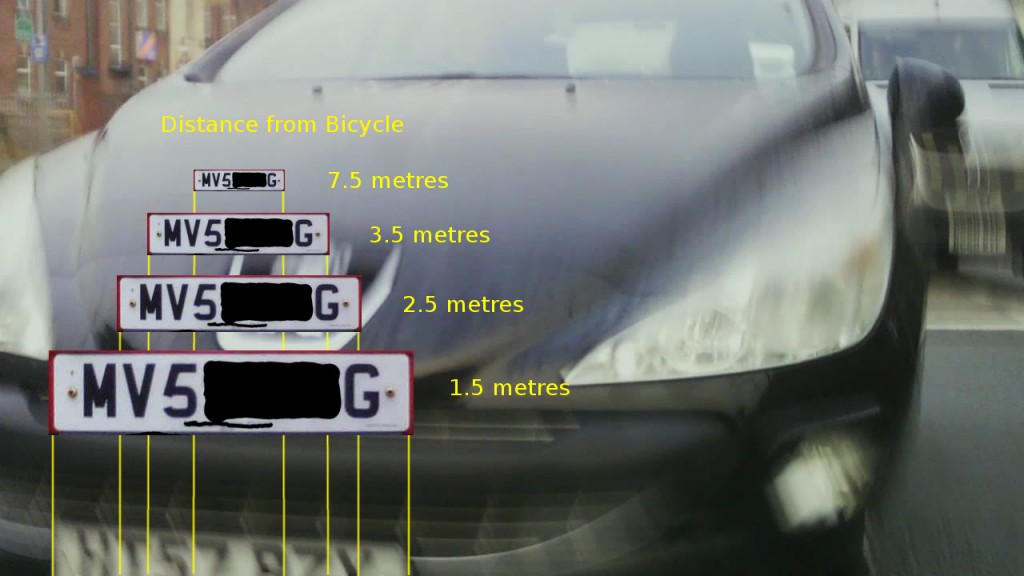 The number plate shows that there was a gap of 1.5m between the rear mudguard of my bicycle and the front of the car.

My speed can be calculated by counting the number of dashes I pass in the road markings in a given time: 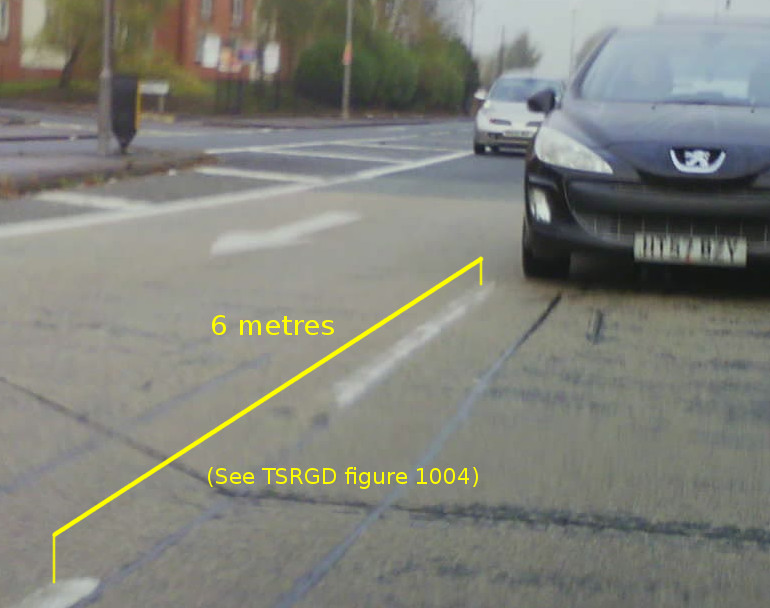 According to the Government specifications, these road markings are spaced 6 metres from the start of one dash to the start of the next. I verified this by by cross-checking against a measurement taken from Google’s satellite images – 3 dashes do indeed take up 18m. From the video clip, which is shot at 30 frames per second, I can see that I passed three of these in 2.7 seconds, putting my speed at 6.67 metres per second (i.e. 15 miles per hour).

So, the driver was leaving a gap of 0.224 seconds between the front of his car and the rear of my bicycle. The highway code guidance says that drivers should leave a minimum of 2 seconds space between their vehicle and the one in front, and that is when following a vehicle with brake lights on a good, dry road surface. On a wet road surface such as this one, it is recommended that drivers should leave double that amount of space.

When the driver then overtook me, he straddled the lane markings as shown in this picture: 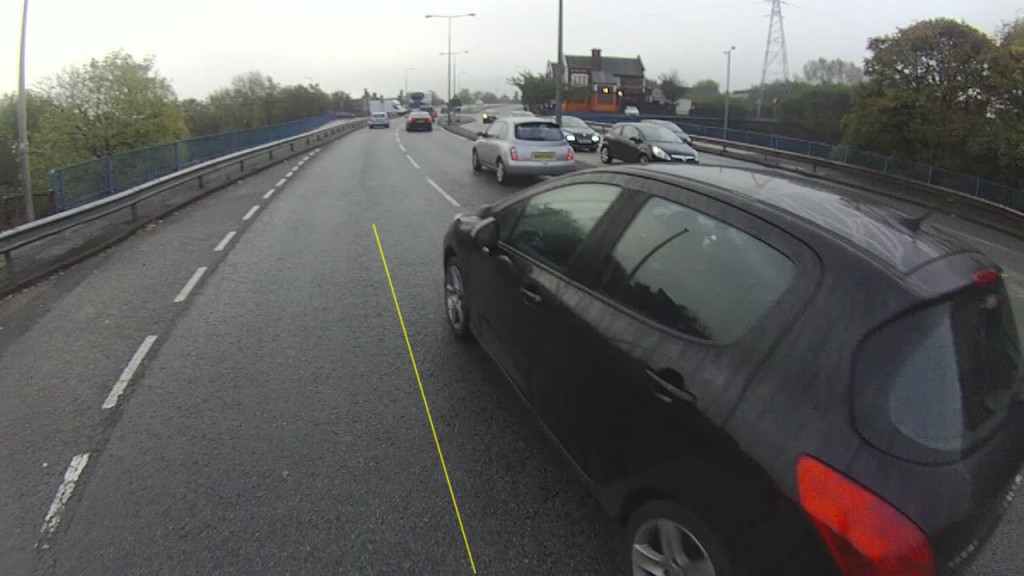 The yellow line shows roughly the path that I was riding on my bicycle: slightly right of centre in the inside lane (for the reasons I cited in this article). You can see my road position more clearly in this image from a couple of seconds earlier: 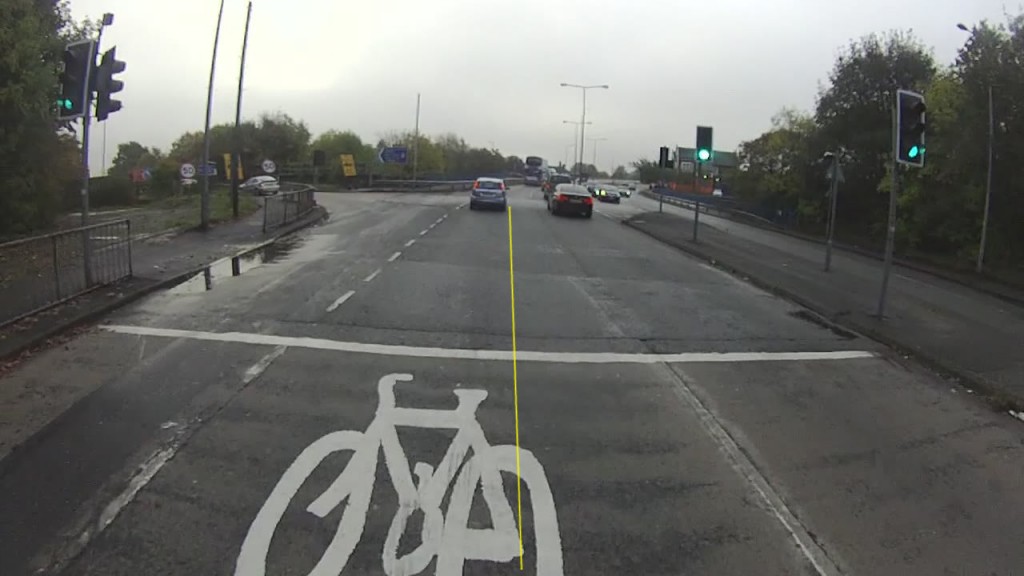 It’s true that it is hard to measure precisely what the passing distance was here, but it was certainly less than 30cm and far below what ought to be expected of a careful and competent driver, as expressed in the Highway Code:

The Greater Manchester Police are of the view that the driving shown here does not constitute dangerous driving, nor even careless driving, and they are not even prepared to issue a warning under Section 59 of the Police Reform Act 2002, which I discussed in the previous article. I find it very difficult to imagine what is going through the minds of these police officers.

Having carried out my analysis, I called 101 again, on Tuesday morning at 9.50am, to register a complaint about the officers’ handling of the matter. I was given a new log number and told that someone would call me on my mobile phone within 24 hours. By 4.0pm on Wednesday,  I had not received any call,  so I rang again and was told that a sergeant had looked at the log and referred up to an inspector. The person responding to my call told me that the inspector would call after 9.00am on Thursday morning. Well, by 13.30pm on Thursday, 57 hours after I called 101, I still hadn’t received a call, so I called again; I was told that someone would ring me later that afternoon. By 1.40pm on Friday, I still hadn’t received a call back, so rang 101 for a fourth time. The operator on the 101 line was extremely helpful and gave me a lot more background about what might be happening. From what he said, though he did not say this explicitly, I suspect that the delays might be caused by a failure of communication between Salford (F Division) and Bolton (K Division) of the police. The feeling that I as a customer of Greater Manchester Police, is that I am just getting bounced back and forth between two divisions. The operator passed my call to the Customer Service Desk at Salford, which was answered by a voicemail system, and I left details of the log number, my phone number, the fact that I have been waiting 72 hours, and asking to be contacted as soon as possible. I received a call from Salford Customer Service Desk on Friday evening at 5.46pm. This time I was told that the complaint has been passed over to Bolton because they “were the ones that dealt with it”. I pointed out that Bolton were not the ones that dealt with it; officers at Bolton had expressed a view on the matter, but officers at Salford had made the decision not to proceed, without actually seeing the evidence themselves. I was also told that the complaint has been given a new log number when it was passed to Bolton, but they are not able to tell be what that log number is, and that I would need to call the Customer Service Desk at Bolton to pursue the matter further.

It’s time to call a halt to this farce, so I will not be calling Bolton Customer Services, I will escalate the matter further. I will do this now in relation to this incident, the farcical way in which the police have handled it, and the two incidents I wrote about in my previous article. I just need to determine what is the best way to proceed with this (but see below). In the meantime, here is a picture that I find crops up in my head now whenever I am talking to the police on the phone:

Update (28th October 2014): I sent a complaint about the handling of all three incidents to the Professional Standards Division yesterday; an old fashioned, paper letter, with modified versions of these two articles attached as appendices.